EUR/USD Is Up Again – Another Selling Opportunity? - Forex News by FX Leaders

EUR/USD Is Up Again – Another Selling Opportunity?

On Friday, we posted an update about a trade opportunity in EUR/USD. This forex pair surged from 1.0370 on Wednesday to 1.0660 on Friday morning which opened up a window for a long term sell forex signal. We didn´t take that trade because the surge higher happened very quickly and the reverse was just as quick, which didn´t give us a chance to pull the trigger.

Nonetheless, we did emphasize this trade opportunity that day and this forex pair slipped more than 300 pips in the next 2-3 trading days. I see that that update had more views than most other articles, so I hope some of you guys took advantage of that opportunity.

Now we´re back up, but still around 100 pips lower from last week´s high. This second jump presents us with another chance to open a long term signal. That said, we must not make the common mistake of jumping into a drowning boat just because we lost the first opportunity to make some pips from this pair. That´s why we have to carefully evaluate this forex trade.

Looking at it from the USD angle, we can see that the Buck has entered a period of weakness against all major currencies, especially after the FOMC minutes were released yesterday. The price action today points to further gains since the lows have been getting higher and so have the highs. Just now, the price in this forex pair broke above 1.0575, which is yesterday´s high.

That´s another signal that EUR/USD buyers are not done yet. We can´t sell if there are more buyers than sellers at this moment. Actually we can, but the risk/reward ratio won´t be very good.

Call me a money management geek/freak, but I don´t like to risk 300 pips for a 200 pip potential profit. I´d rather wait for a better entry price higher up, particularly since the USD selloff continues in full force.

The US ADP employment change didn´t help things since it missed the expectations by nearly 30k. But, tomorrow might be the day for the trade. The US non-farm employment change data, the US unemployment rate, the US trade balance, and the wages/earnings are scheduled for release tomorrow. 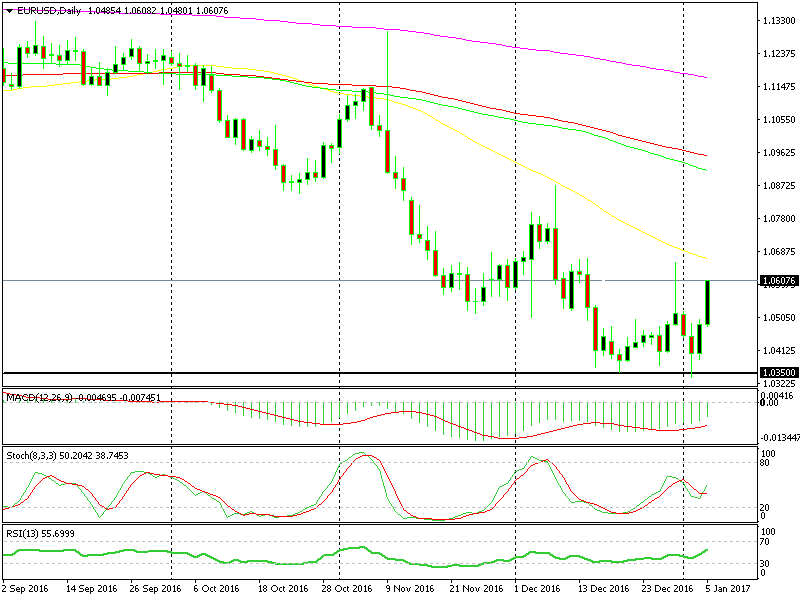 The retrace up doesn´t look exhausted yet.

As you can see from the daily EUR/USD chart,  both technical indicators at the bottom of the chart are heading up with some room still left until they reach overbought levels. Probably tomorrow these two indicators will get much closer to those levels, considering the big bullish daily candlestick today.

By that time, the price would have reached the 50 moving average in yellow (50 SMA) which provided resistance early in November. So, technically this pair would be a great selling opportunity tomorrow, but only if the US economic data doesn´t disappoint, particularly the wages.

That´s only if we look at the daily chart because the weekly chart paints a totally different picture. As you can see there, this week´s candlestick looks very scary for the sellers. It is extremely bullish and there´s only one day left for the week to close. 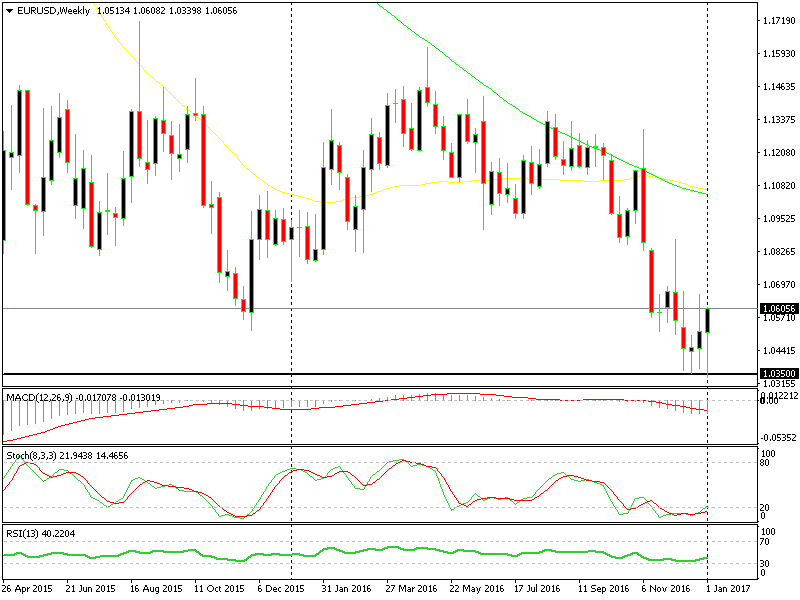 The weekly chart looks scary for the sellers as it is right now.

So, unless this recent short term trend reverses tomorrow after the US data is released and this week´s candlestick changes, we might stay on the sidelines despite the great daily chart setup. If the weekly candlestick closes tomorrow as it is now or even higher up, which might as well happen, then 1.08 is within reach. We have climbed nearly 300 pips in the last 2-3 days, so another 200 pips to 1.08 is not much.

I reckon tomorrow will be the day to decide what to do. If the US data is not horrible and if the 50 SMA holds, then it will be the perfect trade. Otherwise, it might turn into a perfect storm. But, we´ll take another look at this forex pair tomorrow before the US figures are released and make our mind up, so check us again tomorrow. Hopefully, we will make a killing.