The Trade Is Finally On - Forex News by FX Leaders

The Trade Is Finally On

Our EUR/USD trade we´ve been talking about is finally live. We waited until the US economic data was published and once we got the numbers we opened the EUR/USD signal. There was some volatility, but we managed to get in at a good level in this forex pair.

Overall, the numbers look soft at first glance, but they´re really not if you know how to read them properly. The miss in the US trade balance is pretty small, a 156k non-farm employment number is still pretty good despite being about 15k lower than the market was expecting and at 4.7% the US unemployment rate stands below the natural unemployment level.

These were the "bad numbers", but as you can see they´re not really bad. They´re pretty good, just not as good as expected.

The US wages (US average hourly earnings) were what took the market´s attention though. Last month they declined by 0.1%, so forex traders including me were interested to see whether that was just an exception or if this aspect of the US economy is turning softer again. After all, this has been the weakest link of the US economy.

But, the wages numbers were damn strong. Wages grew by 0.4% month-on-month beating the expectation and the yearly figures were much stronger. The prior reading for the yearly wages was 2.5%, while today it jumped to 2.9%.

That´s a big jump for a single month and it is a good number overall. So, last month´s miss proved to be just an exception. 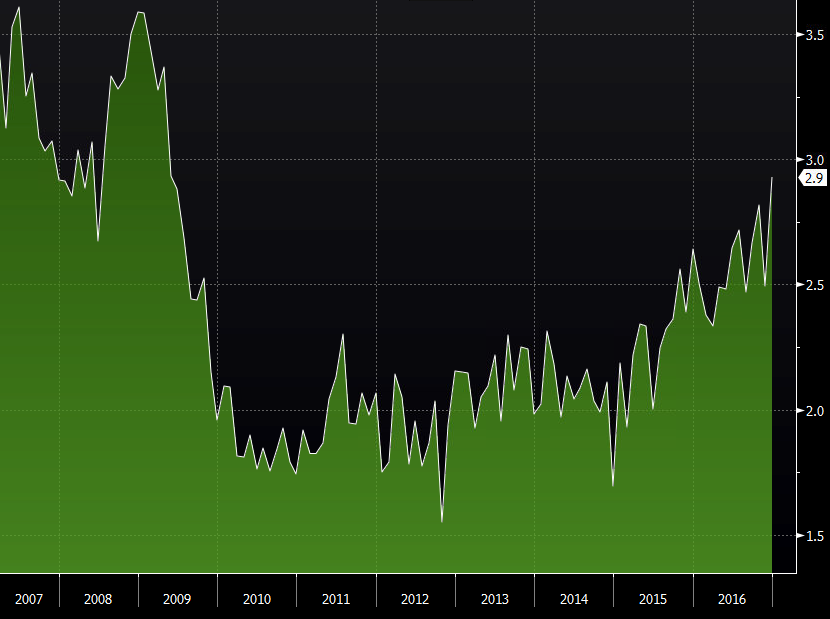 If wages pick up fast like this, then it will soon spill into other sectors of the economy, such as retail sales, consumer confidence, home sales and more importantly inflation. That´s music for FED´s ears.

The FED has been complaining about wages for years with good reason, but if they continue to go up like this then there won´t be any more excuses left for Yellen and Co to sit on their hands. If you want to hike the interest rates you want the wages going up and today´s numbers show exactly that.

I don´t know if you guys understand the importance of the wages figure today, but that´s the last barrier to fall on the monetary tightening policy path. That´s a big deal guys. With the US manufacturing sector getting back in shape a couple of months ago, low wages remained the only excuse for the FED, which has now has now fallen.

Besides that, the wages are directly linked to all other aspects of the US economy, as we mentioned it above. Yet, the forex market doesn´t seem too impressed. After the initial 80-100 pip tumble, everything has stalled now. That´s worrisome for USD buyers, particularly knowing that we would have seen a 200 pip jump in the USD until a few weeks ago.

I´m certain that everyone is wrong since this will surely set the tone and the trend for weeks/months to come for USD pairs, but often forex traders get too invested in the short term outlook, rather than seeing the big picture.

The short term (this week) market sentiment towards the Buck has been horrible without any apparent reason which is like due to some position adjustment for the new year. That´s the reason for the volatility we have seen this week and it might as well take the Buck for another ride higher, but the forex market will come to the same conclusion as me sooner or later.

I just hope that the market realizes the importance of today´s US wages report ASAP, so we can take profit on our EUR/USD signal ASAP too. Otherwise, we´ll have to wait for another push higher, which would open the door for another sell signal higher up.