USD/JPY – Another Pair Another Opportunity? - Forex News by FX Leaders

USD/JPY – Another Pair Another Opportunity?

Yesterday, we took a quick look at EUR/USD and the selling opportunity it´s presenting us as trades at the 1.06 level. But this recent USD tumble has taken other forex pairs to some important levels and USD/JPY is one of them.

The uptrend in this forex pair, since the US elections, has been the strongest in all major pairs, so a retrace here offers the best opportunity for a long term forex signal. The risk/reward ratio is also pretty good.

As you can see from the daily forex chart below, yesterday, this forex pair got as close as a handful of pips to the 115 support level. This is a big round level and it´s been a semi-decent support/resistance level last month, so a buy forex trade against it would offer some good chances for USD/JPY traders. 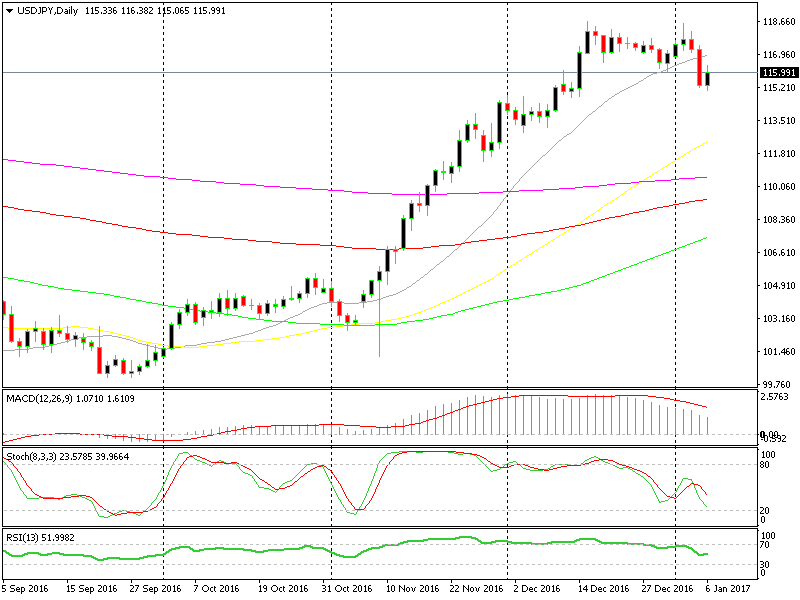 We´re hanging around the neckline of this double top chart pattern.

That said, this forex pair is about 100 pips higher now from last night´s low. We´re at the neckline of this double top chart pattern. The two double tops are clearly visible on the chart and if the double top forex strategy is to work out, the decline could stretch as far down as 113.40-50.

The 116 level where we are trading now is the right entry price for a sell forex signal according to this trading strategy. It´s the neckline of this double top pattern, which has been broken yesterday and now we are testing it again during this intraday retrace higher.

It´s a good trading opportunity, but I don´t feel safe going against the long term trend. If it was in the opposite direction, then I would surely be persuaded to open a buy signal. 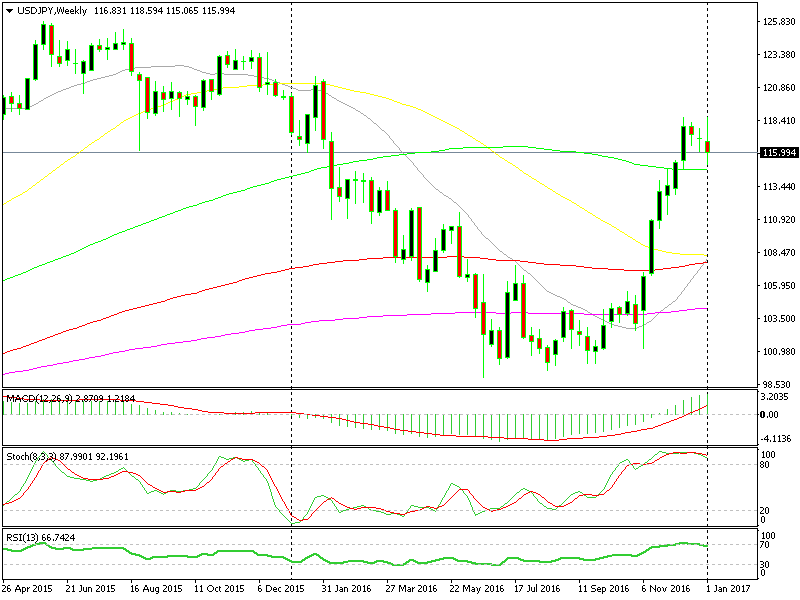 The 100 simple moving average in green is adding strength to the 115 level.

But as I mentioned earlier, the other trade offers better odds. The 115 level is where the 100 SMA stands on the weekly forex chart. It provided some sort of resistance during the move up and it hasn´t been broken since. That gives some extra importance to this support level.

So, if the US economic data is not that bad, particularly the wages, then I will try to get in long on this forex pair. That´s if I can pull the trigger fast enough, because the market has been waiting for this round of data all week and it might go nuts in a split second, which would make it difficult to open a forex trade right after the release.

Forex Signals Brief for January 30: Uncertainty Prevails Ahead of the FED, BOE and ECB Meetings
3 days ago