The British Prime Minister went full throttle on Brexit over the weekend, at least that´s the feeling I got from the media.

The BOE Governor, Mark Carney, will be live today as well, but May´s speech is what the market cares about right now. As we have mentioned many times recently, the financial markets have been focused on politics for months now and with good reason.

Last week we had Trump, who will take the spotlight later this week as well, but right now May has her moment. This is not a big surprise since she´s been a hard Brexiter since she became Prime Minister, apart from a short period when she was forced to soften her tone.

Now she´s back at it again and the poor Pound is suffering the consequences. Everyone noticed the 200 pip gap when the forex market opened last night. It opened below the 1.20 support level, but the price is back up again now.

That´s a warning signal that buyers have not capitulated yet. That´s why we must be careful both ways with this forex pair. 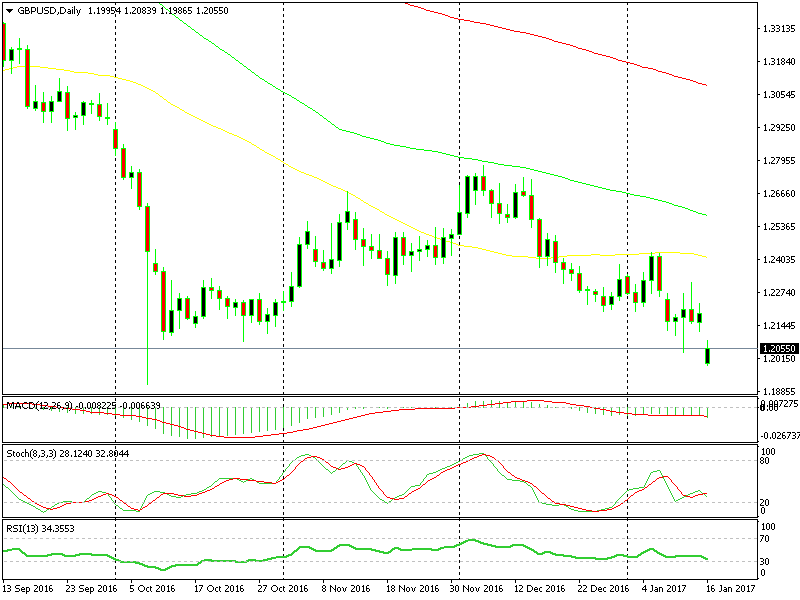 We haven´t seen a gap in a while in GBP/USD.

The real support here comes around the 1.19 level, which was the low after the GBP crash last October. That´s the red line right now. Move below it and we´re targeting 1.15; stay above 1.20 and the yellow line becomes the target.

That´s the 50 moving average on the daily GBP/USD chart and that´s where I´m planning to open a long term sell forex signal if nothing extraordinary happens until then. By that time, the technical indicators on the daily forex chart will become overbought, which increases the odds. So let´s wait and nurture our other long term signals.

GBP Down 2 Cents After 50 bps BOE Hike and Hint on A Peak Soon
21 hours ago
Will the BOE Stop Hikes As Economy Deteriorates?
3 weeks ago