Yesterday, EUR/USD dived for about 100 pips after Draghi refused to even consider the recent pickup in the Eurozone inflation. Actually, it turned into a broad USD demand as the Buck gained across the board, especially against the Japanese Yen.

But later in the evening, most forex majors started to reverse and we opened a sell EUR/USD signal at 1.0662 because we thought that the retrace was almost over.

That retrace stretched a bit further in the following hours, up to 1.0692, so I was a bit worried when going to bed last night. 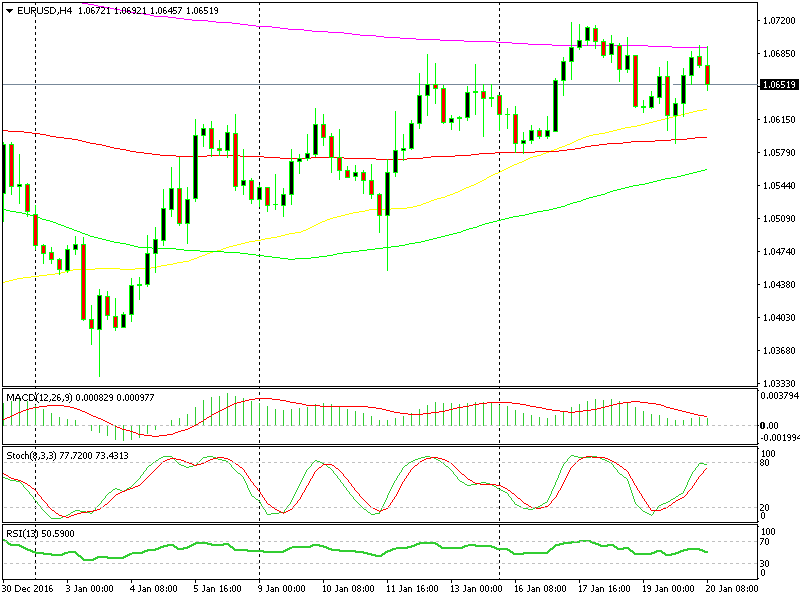 The downside looks much more favourable than the top side now.

But this morning, the picture seemed much better since the price is trading about 40-50 pips lower. The H4 forex chart, in particular, looks very enticing. As you can see, the stochastic indicator is overbought and heading down now. The 200 moving average (200 SMA) in pink did a good job his morning by providing solid support.

Now we´re approaching the take profit target as I type, which is great. However, remember that Donald Trump will become the US President today, so don´t be too sure about anything because the forex market might play games.

USD/JPY Reversing Down at the 100 SMA, After Higher Inflation Numbers from Japan
5 days ago
AUD/USD Coming Off the Highs After 2022 Inflation Surge, As Risk Sentiment Abates
Overnight we had the CPI consumer inflation report from Australia, with AUD/USD being on a bullish trend for a few months
1 week ago