Is the DAX Still Bearish? - Forex News by FX Leaders

Is the DAX Still Bearish?

Good afternoon, fellow traders. After the exciting analysis on the WTI, Gold, and Silver, here we go with the DAX (German 30).

Earlier in the European Session, the Dax traded in a slightly bearish tone at $11525.33 and later soared to a high of $11593.60. Well, the volatility was thin in the early trading session as investors waited for several, medium impact, economic indicators from the Eurozone, including the German flash manufacturing & services PMI.

Fortunately, the economic events released favorably positive results and helped to underpin the German 30. Germany’s private sector growth lightened slightly in the opening month of 2017. At 54.7, the Markit Flash Germany Composite Output Index led to the strong extension in January that was more rapid than the 2016 average figure of  54.3.

Besides that, the Eurozone economic figures boosted the investor's confidence on the stock market, leading to a sentiment that better manufacturing and services sector will increase their ROI in the stock market. 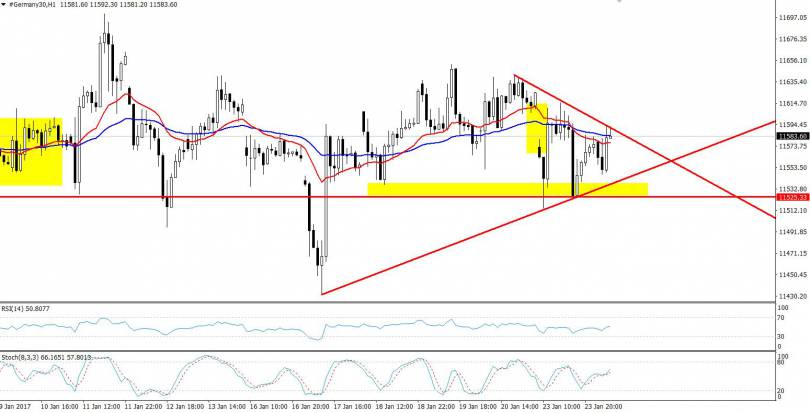 So are you convinced and looking to buy DAX as it's likely to stay supported throughout the trading session?

Hold on, let me share my stance about the technical analysis of German stock index. The DAX rose to trade around $11579, but the gains seem to be limited since it has a strong resistance at $11590. Nevertheless, we can see a symmetric triangle pattern on H1 timeframe.

Gold Prices Stabilize As USD Index Rebound Ahead Of Fed Policy: What Does it Mean For XAU/USD?
13 hours ago