This morning, we opened a sell forex signal in EUR/GBP. Technically, the chart setup looked great. The H4 forex chart was overbought with stochastic and RSI both overbought and a number of moving averages were hanging just above the entry price.

The H1 EUR/GBP chart looked favourable as well for the same reasons. The 100 SMA in red on top and both technical indicators at the bottom of the chart were oversold.

The only caveat was the Eurozone economic data, which was to be released shortly.  The data was released and it was pretty impressive. The Eurozone inflation (CPI – consumer price index) report was great as the yearly number came 3 points above the expectations, jumping year-on-year from 1.1% to 1.9%. 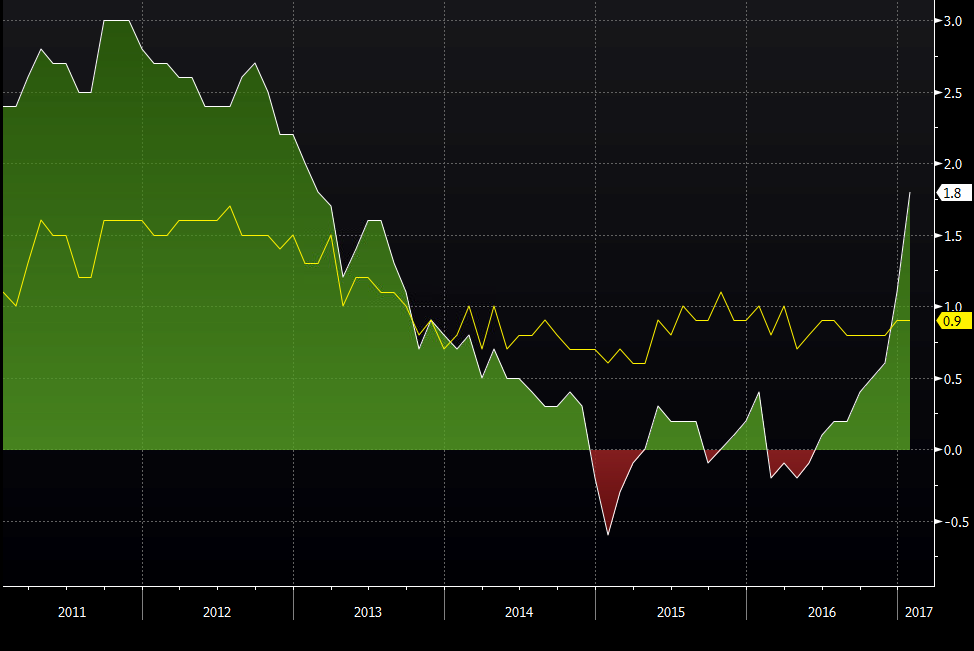 What a jump in prices.

That´s a really good number, right? Indeed, it is, but not for the ECB (European Central Bank). We´ve heard the ECB president, Draghi, and all his minions state quite often that inflation is not real, although the Germans are sweating.

That´s not all, though. The Eurozone unemployment rate fell from 9.8% to 9.6%. But guess what? EUR/USD didn´t move a finger, nor did all other Euro pairs, except for EUR/GBP. EUR/GBP jumped about 780-80 pips after the release which smoked our EUR/GBP signal.

The downtrend is solid.

However, that came from the GBP side. GBP dived nearly 100 pips and I see no reason why because the UK money supply and net lending to individuals, which were published a while ago, never really move the market.

On the other hand, the Eurozone economic data was very impressive (we´ll talk about it in another update), yet the Euro remained stagnant.

Sometimes the forex market just moves for no reason. A break of a certain moving average, a resistance level, or a fat finger in a large trading desk adding another zero to a forex order can cause all sorts of moves. We can never figure out everything that happens in the market, but that move felt like a hit below the belt. Well, let´s move on and look for other trades.