Yesterday, the trading signal on Gold had not done very well and closed at a loss of 40 pips. We entered a buying position above a major double bottom support level of $1233. But unfortunately, the market broke below this level on the stronger U.S Dollar.

Well, it happens when a fundamental comes your way. One of the major reason behind the sudden move was the remarks from Cleveland Fed President, Loretta Mester, who caused an unexpected fluctuation in the market with his hawkish tone. As we discussed in the today’s Morning Brief, he stated that they are “comfortable” raising interest rates at this point as inflation pressures pick up.

Today, the precious metal Gold was trading at $1234, below a 50 Periods EMA, along with the RSI below 50, demonstrating a bearish tone of the metal. Furthermore, it also broke below a significant intra-day support level of 1234.75 and kept holding below this level. But later in the European trade sessions, the buyers entered the market to drag the precious metal towards another triple top resistance level of $1238. 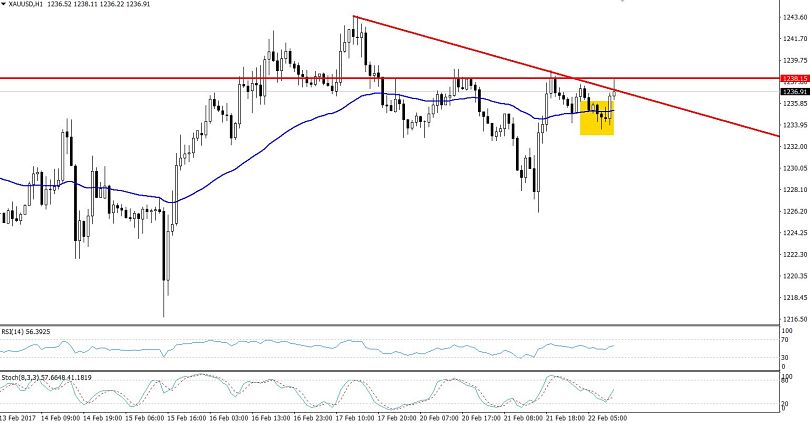 At this moment, it’s better to not look for any fresh entry because the FOMC meeting will be released in few hours. This publication usually draws some attention while this particular set of minutes may not provide something distinct beyond what was already heard from Fed Chair Janet Yellen’s testimony before Congress earlier this week.

Let's keep an eye on the $1238-9 because below this major level,  we may see some sellers. But currently, the ball is in the hands of the FOMC meeting.