Politics Can’t Get the US Down – February 2017 Monthly Review

February is over! We are two months into the new year and have seen enough to know that this is going to be a tough year, if not a tough 4-year period, as long as Trump´s mandate lasts.

Politics are all over the markets and the uncertainty is enormous, both in the short and the long term. Almost all the western countries are going through political transitions – starting with Brexit, Trump and the elections in the EU.

Speaking of the elections in the EU, the Euro has been following French presidential polls. Friday was the perfect example of how much the forex market is dependent on politics right now. The pro-EU candidate took over from Le Pen for the first time and the Euro surged about 130 pips.

The Brexit twists and turns will never end (of course). The Scottish parliament voted against triggering Article 50 to leave the EU, while Sturgeon is pressing for another Scottish independence referendum and Article 50 must go through the British parliament before pushing the button.

On the other side of the ocean, Trump continued what he started. He advanced with his agenda and added confusion to the market. Add the FED to this, and the situation gets out of hand for forex traders. We still closed the month with a 253 pip profit, though. 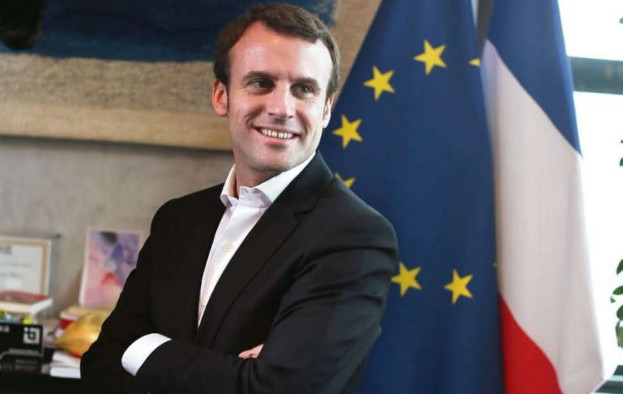 Forget about Brits and Americans, the French are coming

With all the volatility and uncertainty, I suppose all forex traders have had a tough time. Our team also had a tough time; one week we were down, the next we fought our way up. In the first week (three days actually) we ended up 60 pips down, but we made up for it in the second week when we grabbed around 200 pips from the forex market.

In the next two weeks we made some and lost some, and so we ended up with a 253 pip profit at the end of this short month. Looking at the results, I can see that EUR/GBP has been the worst forex pair for us in February. This is probably due to the fact that both these two major currencies were heavily affected by politics this month, with Brexit events on one side and the French elections on the other.

We lost 80 pips on that forex pair, but we made 115 and 104 pips on EUR/CHF and AUD/USD respectively. So, we did close the month in profit, but it was a hell of a ride, despite the small number of signals.

But after all, that´s the reason we held back, because most of the time the market was unreadable, both technically and fundamentally. Let´s hope March will be easier.

In January, Donald Trump became the president of the United States and made a few striking decisions and executive orders. We had a taste of him as president, and now we have a better idea of what to expect this month.

There were lots of comments and tweets, the most important for us were related to forex of course. Slamming Germany, China, and Japan has become the norm now, but the market still leaned on the JPY side, just to be safe from all this uncertainty.

One of the executive decisions was the amendment of the coal bill which might increase pollution, but makes it easier for some companies to make more money. You force the other to include cutting down business regulations, by implementing the “one-in, two-out” approach, freezing government hiring, weakening the Obamacare and probably a lot more tactics.

Obviously, the market was as confused as a lost lamb and the FED made things worse. The February statement and the comments from all the members point to a March rate hike, but the market doesn´t seem convinced about that either.

Moving over to Europe, the French election polls are having an increasing impact on the Euro and Macron´s advancement pushed the Euro about 120 pips higher last Friday. At least EU will be safe if he wins.

In Britain, it looks like we are going to have another Scottish independence referendum. But before that, Article 50 is going through the UK parliament first, so who knows how all this will end?

At the end of last year, we saw the UK economy make a surprising jump start. But it looks like it has now run out of fuel. Inflation is picking up fast due to higher oil prices and cheaper GBP, but the economy is losing its pace just as fast.

Halifax HPI (house price index) showed a 0.9% decline at the beginning of the month, while earnings declined 0.2% from the last reading, retail sales fell 0.3% and manufacturing and service sectors both lost about 1% compared to last month.

The GDP for Q4 2016 picked up a tick, but that history now, the present paints a different picture. The funny thing is that the BOE (Bank of England) can´t cut rates if inflation keeps moving higher.

Europe, on the other hand, shined in February. The manufacturing and service sectors are in a great shape apart from manufacturing in France, inflation finally reached the ECB threshold of 2% despite the core CPI (consumer price index) remaining stagnant at 0.9%.

Now the ECB has shifted to core CPI instead of the main CPI number. We also saw a few glitches in the US economic data in February, but nothing to keep you awake at night. Although, we must keep an eye on it in March.

I sometimes think nowadays… ‘why do we bother doing the long-term technical analysis?’. You get a perfect technical setup, then open a forex signal, only for Macron to jump ahead in the polls and send the Euro the other direction! Don´t get me started about the GBP and USD (I don´t want to mention Brexit and Trump for the millionth time). 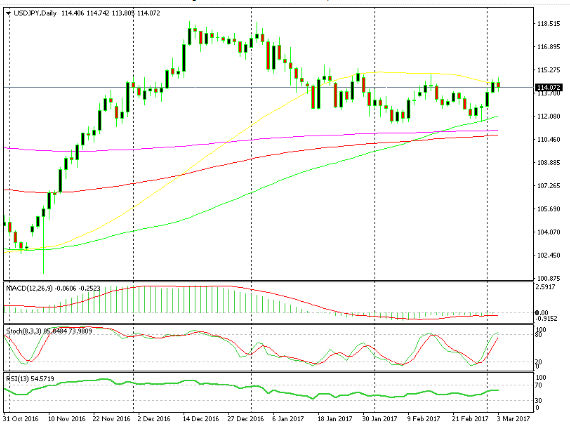 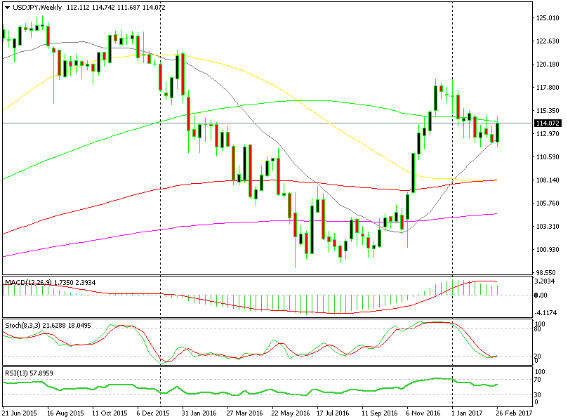 If we change to the weekly chart we can see pretty much the same thing. This time, though, the price is stuck between the 100 SMA on top and the 20 SMA (grey) at the bottom. Which side will be the first to give up? We don´t know that (although the stochastic indicator is pointing up on the weekly chart), but it might be wise to play this range for now, from 115 to 111.50.

This is it for February, guys. It´s been a strange and irrational market as we expected, but we don´t get to choose the trading conditions. We can only try to come up green at the end of the month, which we did in February, so it wasn´t a bad month after all.

The problem is that we expect it to worsen in March. French presidential elections are approaching and UK PM May has promised to trigger Article 50 sometime this month. Trump will always be himself, so great times ahead, eh?

Ethereum Price Rejected Again: Is Another Bearish Move Coming Up?
6 hours ago