Is it time to Sell WTI Crude Oil? - Forex News by FX Leaders

Is it time to Sell WTI Crude Oil?

Today in the Asian session, the WTI Crude Oil is trading slightly bearish at $53.31 after trading bullish on Friday. The black gold, crude oil, is highly sensitive to the demand and supply news coming from the OPEC member countries and Non-OPEC country, Russia. Let's have a look at the major players who caused a drag on the oil prices in the previous week.

Nowadays, one of the main concerns of the OPEC countries is to support the falling crude oil prices. For this reason, they are putting a lot of efforts to cut daily and monthly output. Yesterday,  the Secretary of OPEC, Mohammad Sanusi Barkindo, shared that OPEC is likely to decide in May about extending its production deals with non-OPEC members. However, for further clues, we need to monitor their next meeting that's held on March 25.

Russia, being the 3rd largest producer of Crude Oil, is playing its role in weakening the oil prices. The February supply figures from the Energy Ministry of Russia remained unchanged at 11.11 million. It's exactly the same as the January figures and it is rousing concern that Russia is not in favor of cutting production. 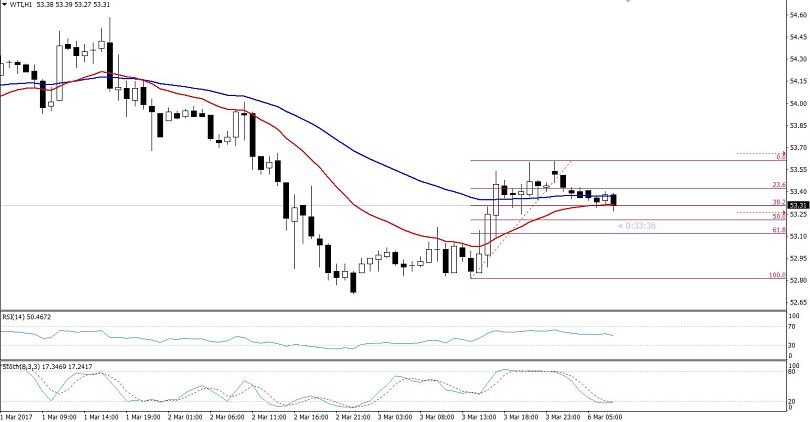 We can see in the 1- hour time frame that the WTI Crude Oil is holding at $53.31 after completing a 61.8% Fibonacci retracement at $53.50. It has also formed the "hanging man", a bearish reversal candle at the top which is giving us a clear signal that a selling trend is likely to initiate. The RSI below 50 is providing us further confirmation about its bearish tone.