RBA Shakes the Aussie but Our Signal Survived

Just before going to bed last night, I left a pending order to sell AUID/USD. Now that I´m screening the forex charts, I see that the price in this forex pair has jumped to 0.7632 during the night, but at least we´re back down now, hanging around the opening levels.

I saw that the RBA (Royal bank of Australia) had a meeting on the schedule last night, but no one expected any change in the interest rates or the monetary policy. So, I thought it would be reasonable to leave a pending order at 0.7605, just below the 100 SMA (green) on the hourly forex chart. 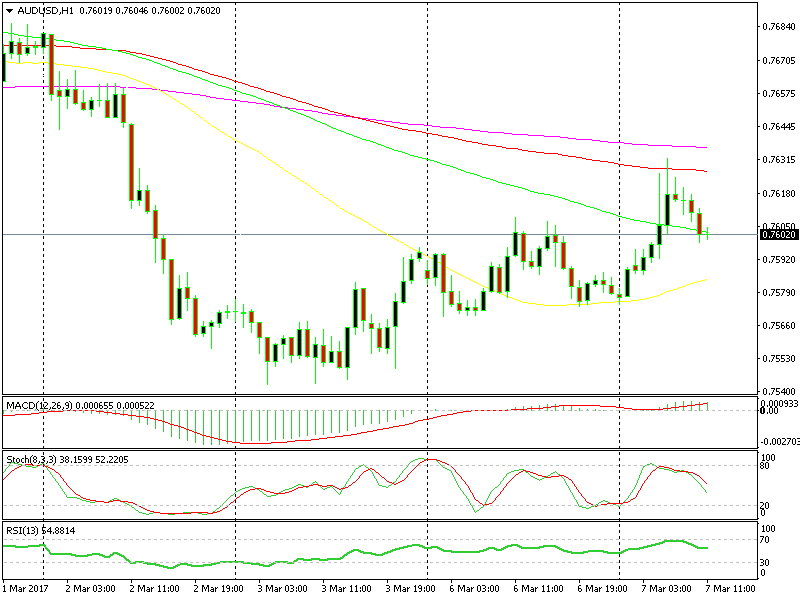 At that time, the price was about 15 pips below there. Now, as you can see on the hourly chart, the price is moving just below the 100 SMA, so it looks like we´re on the right path with this forex signal.

The next target is the 50 SMA (yellow). In fact, the decline (or rally, depending on the forex pair) we are seeing right now is coming from the USD side. Otherwise, this forex pair would be much higher since the Aussie has been the strongest among major currencies, apart from the Buck.

Anyway, we´re still sliding as I type and we´re approaching the TP level very soon, so let me post this update before it becomes irrelevant.