EUR/CHF – What’s Going on with This Damn Pair? - Forex News by FX Leaders

EUR/CHF – What’s Going on with This Damn Pair?

Last week, we opened two short term buy forex signals in EUR/CHF. Both of them closed in profit as this forex pair pushed higher. As I said in one of those updates, the SNB (Swiss National Bank) was seen buying this pair as they usually do when certain support levels are under threat.

We also have a long term buy forex signal, which is still open. At some point, when the price was around the 1.0820s, we could have closed it manually. However, we thought that 1.09 was within reach since 1.08 finally let go.

We now know what happened. As soon as SNB left the market (stopped buying because they´re always around the corner), the sellers loomed in and they got more confident as the price dived below 1.08 again. 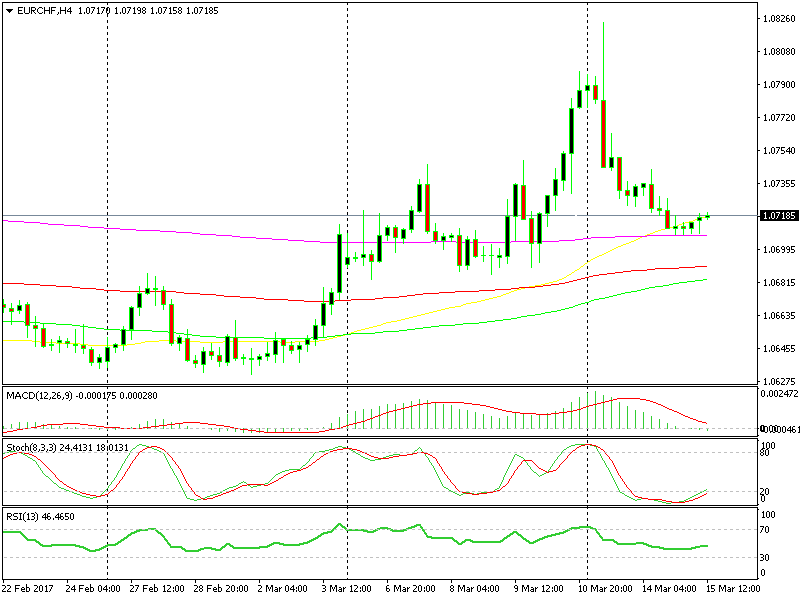 Let the third wave up begin.

Yesterday, we fell as low as 1.0708, but at least the 200 SMA (purple/magenta) held its ground. As you can see on the H4 forex chart above, the stochastic indicator touched rock bottom yesterday, but it has reversed and now it´s heading up.

The picture now looks favourable for buyers, but you never know what´s about to happen with this pair. Actually, the chart setup for the last two months or so looks like an “Elliott Wave Pattern”. We have completed two waves up and two pullbacks. Now it looks like we´re about to enter the third wave up.

If this pattern unfolds according to forex textbooks, then the next target is 1.09. So, I think we must forget about these two forex signals for the moment and let this pair take its own time. When the pips come, it will feel like a bonus.