March 16th Morning Brief – Why Did The U.S Dollar Fall On The Rate Hike? - Forex News by FX Leaders

March 16th Morning Brief – Why Did The U.S Dollar Fall On The Rate Hike?

What an astonishing price action yesterday! Today, the market looks quite different as the prices move away from their previous trading levels. Additionally, we finally saw some progress from the Federal Reserve as they hiked the Fed fund rate by 25 basis points.

However, the price action was unexpected.  As I discussed in my previous report entitled March 15th Morning Brief – How to Trade FOMC Today? the FED fund rate hike was already priced in. Usually, the interest rate hike strengthens the currency, but in the current scenario, the U.S dollar fell 0.87% to $100.74 following the news.

Buy The Rumor, Sell The Fact

The U.S dollar remained strong in the previous week in the wake of the rate hike sentiment. Investors kept their positions in greenback based on the rumors. Later, the 0.25% interest rate hike wasn't shocking enough to attract new investors. Therefore, we saw investors selling off to make a profit on their previous positions.

The first rate hike of 2017 caused a sell-off of the dollar.  Investors are responding to Federal Reserve officials’ "unchanged" forecast. In 2017, the rates will rise three times, which is consistent with the outlook presented in December. Perhaps the remarks from Fed Chair Yellen failed to support the greenback. Furthermore, some investors are concerned about the June rate hike, though that seems unlikely now.

Yesterday, we saw a dramatic shift in the EUR/USD as it soared more than 136 pips to trade at $1.0728. The price action was followed by Janet Yellen’s press conference as well as the interest rate hikes by the Federal Reserve.

Looking at the technical side of the pair, the EUR/USD has upset a major double top resistance level of $1.0700. It has also disrupted an ascending trendline in the 4-hour time frame which leads me to view it as another sign of a bullish trend reversal. At the moment, the EUR/USD can find resistance levels at $1.0740 and $1.07790 along with a support level of $1.0690. 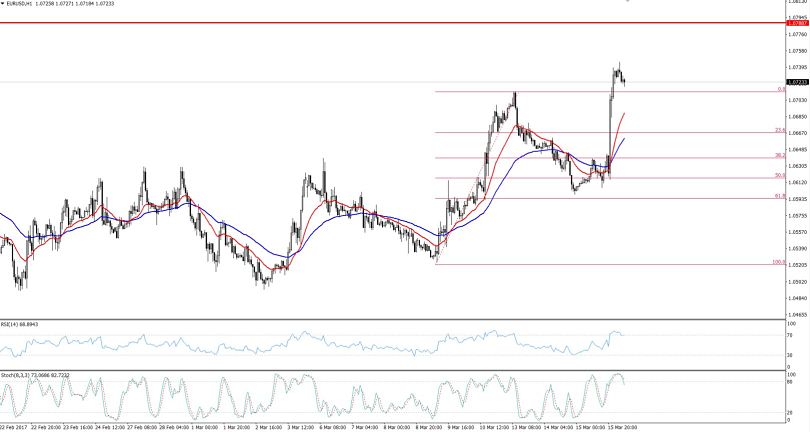 The market could face aftershocks in the wake of the shocking news, therefore, I wouldn't recommend any trade in the pair. Besides, the leading RSI is holding at the overbought territory but the fundamentals seem too strong to initiate the retracement. The tug of war between fundamentals and technicals will be confusing today.