Shorting USD/JPY at the 50 SMA

We just opened a short term sell forex signal in USD/JPY if you noticed. The trend is clearly down, so we´re on the right track, there´s no doubt about that.

The problem with every forex trade/signal is that you never know where and when the end of the trend is going to be. It´s true that there´s a 60 pip space until today´s low, which is more than we´re barging for with this signal, but we might never make it to 111.04 if this really is the end of the trend.

The H4 chart is set against us

The H4 chart looks a bit scary in fact, because it looks like a double bottom pattern is forming and the previous candlestick closed s a pin/hammer, which is a reversal pattern.

Anyway, the hourly chart has been the main driver for this forex pair lately, so let´s just concentrate on this one. Here, you can see that every time the stochastic indicator reached the oversold zone, the price reversed back down and the downtrend resumed and even extended. 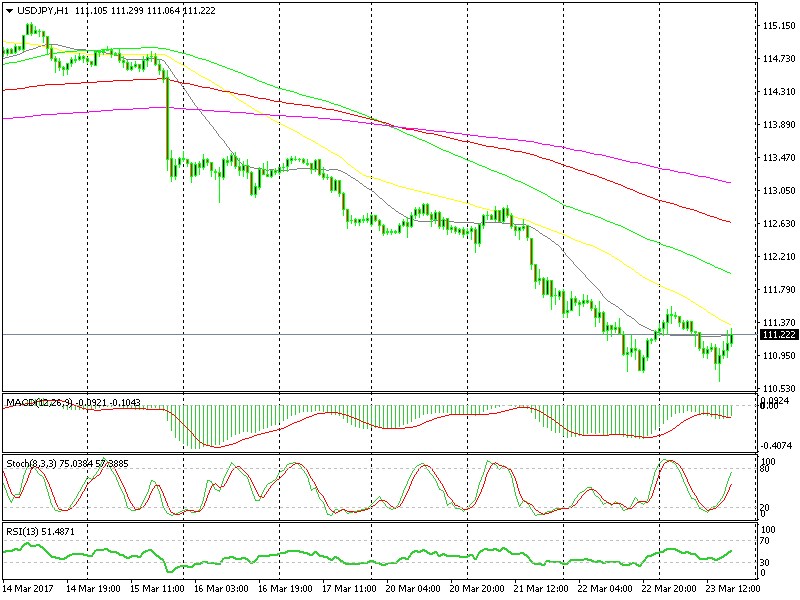 At least, the H1 chart is strongly in our favour

We hope that this is the case right now. Stochastic is almost oversold and we´re just below the 50 SMA (yellow). That makes it two more technical indicators pointing down, apart from the trend which is also down.

Now, as we said above, the trend might reverse right now and we shoot up to 115, but the odds are down and we´re going with the odds. That´s all we can do really. If we want to trade we have to take the hot at some point. So, this is the shot.

You can argue why we didn´t open several sell signals in the last few days, but not this time. Had we done that, we wouldn´t mind a losing single after several winning forex signals. But at this moment, this is the right thing to do. Better late than never.