Yesterday afternoon we opened a buy forex signal in NZD/USD. One of the reasons for this was the chart setup. A number of moving averages provided support and the H1 forex chart was well oversold.

The biggest reason though, was the resilience that the Kiwi was showing. While its relatives in the commodity currency block were weak, the NZD was feeling a bit more adventurous.

This is easily spotted by looking at the pullbacks/retraces. During the periods when USD/CAD and AUD/USD retraced, NZD/USD remained stagnant.

This sort of price action tells you that the sellers in NZD/USD weren´t feeling particularly offensive while the buyers rested. The opposite happened when the pullbacks were over, which means that the market favored the topside. 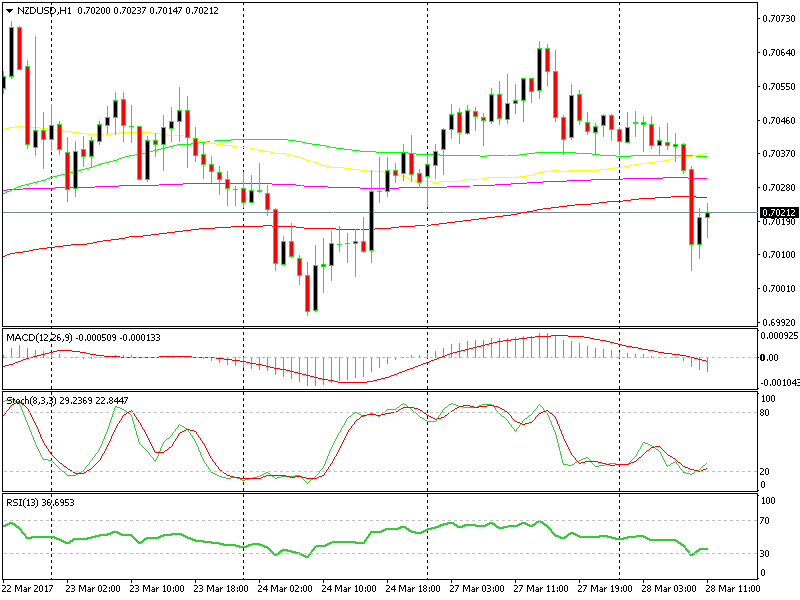 But over the course of the night, particularly in the last several hours, the commodity block has taken a beating and I can´t see any reason for this anywhere. My bet is that something has happened in China, though nothing is on the economic calendar.

Our forex signal here was under threat during that tumble, but it seems to have recovered now, and the buyers are now pushing upward. We´re back above 0.7020 now, but we still have to take out a number of moving averages. Let´s hope that this sentiment continues.