NZD/USD Back on Track - Forex News by FX Leaders

NZD/USD Back on Track

Last night, after suffering from insomnia for several hours, I decided to have another look at the forex charts as we had a couple of open forex signals.

After posting the Brexit timetable, I decided to close the EUR/CHF signal manually for around 20 pips because the buyers were having trouble pushing upwards.

At the time, the NZD/USD pair was weak. At 12:00 GMT, the Australian Dollar jumped around 25 pips, while the Kiwi lost around 20 pips.

If you remember, a few days ago though the Aussie was weak, the NZD was resilient. This is why we opened this forex signal (besides for the downtrend of the USD of course).

Now these two rascals have switched positions; yesterday the Kiwi was the biggest loser among the commodity currency group.

This morning the sellers had another go at the bottom side, but the reverse was pretty swift. By the way, we moved the stop loss for this signal 10 pips lower in order to give the 100 SMA (green) on the H4 forex chart a chance. 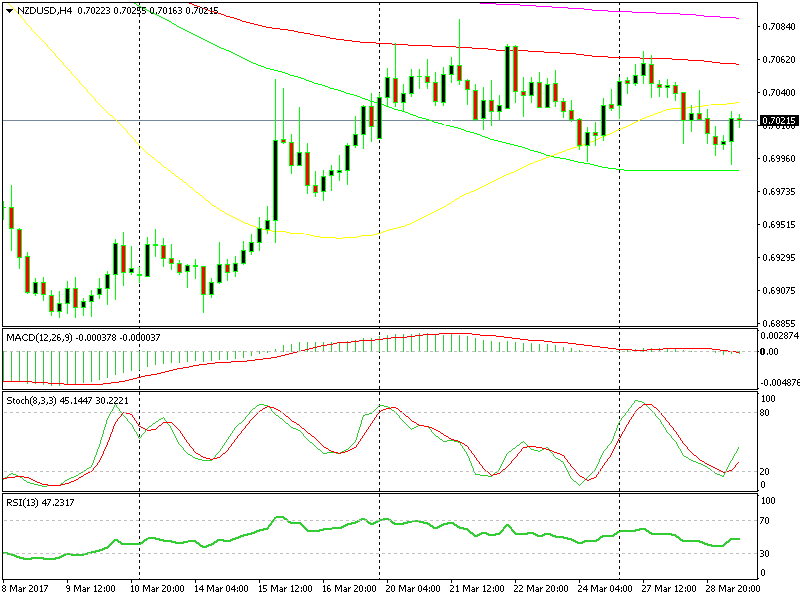 The 100 SMA is providing solid support

That moving average held strong for a long time and now we're back up. We still have to break above a number of moving averages, both on H4 and hourly charts, but is appears our forex signal is safe for now.

The Brexit process is underway, but the Quid remains unaffected. Yesterday we saw a 240 pip decline, though now it seems to have stalled. So, once again, it appears that anticipation has a stronger affect than the event itself…