Eurozone Inflation Retreats Again – This Should Be Bad For The Euro

A short while ago, we received economic numbers from the UK and the EU. The UK trade balance deficit was slashed in half which is supposedly a good thing. To some degree it is, because the cheaper Pound has made British products cheaper, and thus more attractive for export.

But at the same time, the household income fell by 0.4%. That´s a big drop for a single month and this might be the real reason the trade balance deficit has shrunk. The Quid has lost a handful of pips, so it seems that the forex market is more interested in wages/salaries and income than in trade numbers.

Swimming back across the English Channel, the Eurozone inflation numbers lost some of the atttraction they had gained last month. 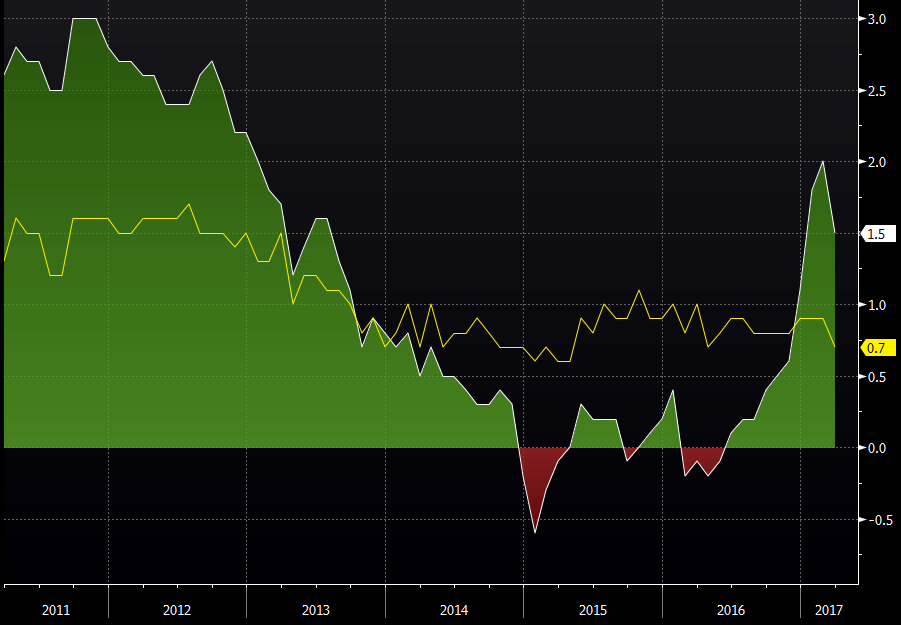 The uptrend has been steep, but so is this month´s dive

This is a big sell signal because the ECB (European Central Bank) has been talking about raising interest rates recently, which led to the better Euro sentiment over the last several months.

Yes, half of this rhetoric is based on better economic numbers (manufacturing, services etc), but the other half is based on inflation, which has risen substantially recently.

Now though, we see inflation dive again but the Euro isn't effected at the moment. ECB´s Benoit Coeure is speaking right now and he´s praising the EU economic data (not today´s CPI numbers), so perhaps he´s keeping the Euro afloat.

But in my opinion, this dive in the EU inflation numbers puts pressure on the market, which might turn sentiment sour for the Euro. The sentiment has been improving since late 2016 and inflation played a big part in this, so if it continues like this, we might see the Euro turnaround in the blink of an eye.

EUR/USD has already lost about 250 pips since Monday, so we must keep an eye on these numbers and on the market sentiment.

ECB Faces An Uphill Battle To Defend Fed-Led Gains In EUR/USD Past 1.1000
14 hours ago

Gold Price Forecast: XAU/USD Heading for $1,980? Here's What You Need To Know
14 hours ago