It's been quite a month and several events which rocked March, however, the majority of this chaos was managed by the market. The FED increased the interest rates for the second time in four months. This makes it the steepest rate hike path in about a decade, yet the USD started a downtrend right after the FED meeting last Wednesday night.

In the old continent, Britain took the final step and started the process to leave the EU by triggering Article 50 on March 29th. No one knows how this will end, but Scotland doesn´t like it one bit and Braveheart Sturgeon is pushing for another Scottish independence referendum.

At least the situation seems a bit safer in mainland Europe. The Dutch gave the boot to the nationalistic anti-EU party, which reduces one of the three political risks for the EU in 2017.

The other two dangers are the French presidential election and the German elections, but the situation seems calmer now because Le Penn remains way behind the other candidates in the final round, while in Germany Merkel´s party won a test local election. 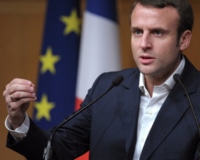 The most troubled love story ended this month

With all the forex related events this month, it´s not a surprise to see our results have been all over the place during March. They oscillated above and below the flat level week after week, but at least we closed the month in profit.

In the first week, we made 43 pips and closed the second one with a 29 pip profit. It wasn´t a lot, but at least the market was more straightforward. In the third week, the FED hiked the interest rates, which was one of the most anticipated movements ever. Usually, when a central bank increases the interest rates the respective currency gets a few bids, to say the least. So the Buck entered a downward spiral in the following weeks, which complicated the situation and it also goes against logic.

We were down in the third week but bounced back up on the fourth by shorting the Buck. We tried to do the same on the fifth week, but after seeing a sudden shift in sentiment during that time with the buck gaining hundreds of pips in just a few days, we were caught on the wrong foot. We still managed to hold on to most of our profit, thus closing the month of March with a 69 pip profit.

We knew this month was going to be hectic. Besides the increased volatility in the last several months, we also had Brexit in March, the European political situation, and the FED.

The FED increased the interest rates for the second time after the December rate hike, so this makes the FED the central bank with the third highest interest rates among the 10 developed economies. This was well anticipated, but I didn´t expect to see the Buck dive around 3 cents in the following weeks.

Well, it happened anyway, but it wasn´t all about the USD. The run for safety during the second half of the month sent USD/JPY nearly 600 pips down to 110.10.

The situation in Europe also played a big part in this USD decline. The EU overcame the Dutch danger as Wilders lost the elections, while Le Penn is way behind the other two French candidates. Although, it seems like Macron is going to be the next French president.

The UK PM May went ahead with the Brexit agenda and sent the papers to Europe to announce its withdrawal from the union. We know this is just the beginning for the UK and it´s going to take ages before everything is clear.

Scotland is not making things easier for the Brits (or the English) either. Looks like another Scottish independence referendum is on its way, but not before Brexit becomes reality, I suppose.

The global economic data continued to show some robust improvement this month as well, although there were a few hiccups which are worth taking notice.

Inflation kept increasing all over the world, but in the last week or so we saw a retreat in some areas, such as in the US and Europe, in particular. That gives Mario Draghi some more breathing room if he wants to keep the monetary accommodation as it is (and we know he does).

The worst came from the UK though, as expected. The industrial and service sectors are losing their shine pretty fast and they´re approaching the 50 PMI level, which is the flat line. A dip below it and we will need to jump start its “heart”.

That´s not the worst, however. The 0.6% decline in average earnings (wages) is what weighs on everyone´s pockets. It might not show on the economy straight away, but the people are feeling it and it will hit the mainstream data pretty soon. Retail sales will be the first to feel it, in my opinion.

EUR/USD has been in an uptrend since the beginning of the year, which extended further in March. But, in the last several days, we saw this forex pair dive head first for more than 250 pips.

This could well be a reverse and a continuation of the long-term downtrend, but looking at the daily forex chart, this sort of chart setup falls right in the Elliott Wave pattern.

We know that this chart pattern develops in five waves, and we´re in the fourth wave right now. If this pattern is to work out as it should, then we might see the end of the fourth wave soon, probably at the 100 SMA (green) on the daily chart. Then, the fifth wave should take us to 1.010 at least. 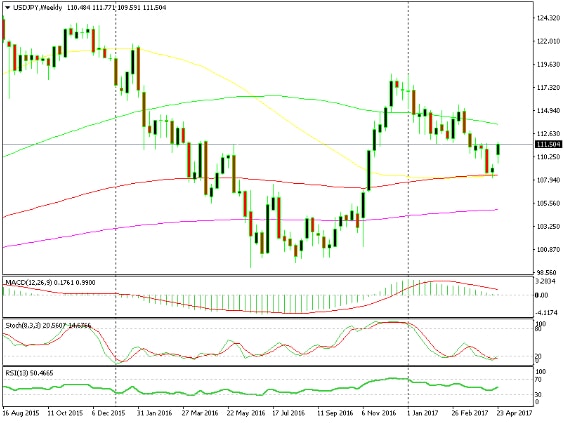 With the stochastic oversold, the fourth wave is almost over

So, that´s what the daily chart is telling us, but the weekly chart seems a bit scary if you are a buyer. The weekly candlestick looks pretty big and bearish and there´s also some bearish divergence between the price and stochastic, which will also throw off the Elliott Wave Pattern. 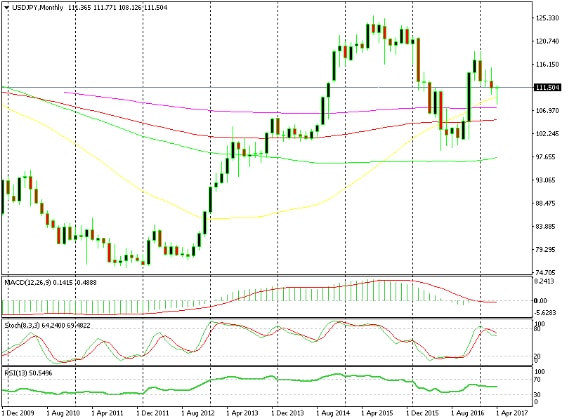 The weekly candlestick is too big and bearish

With March at a close, we closed the first quarter of 2017. We will post an analysis for Q1, by the way. Many things have been happening this month; Britain is leaving the EU, while Scotland is divorcing Britain.

The national fronts are diminishing in Europe, at least in the mainstream politics. Geert Wilders lost in the Netherlands, Merkel´s party won a minor but reassuring local election and Le Penn is not closing in with the pro-EU candidates.

The FED hiked the interest rates, again, but that went against the Buck. We ended up in green once again, albeit with small gains, but we´re gearing up for next month and hoping to have a great month.

Gold Prices Stabilize As USD Index Rebound Ahead Of Fed Policy: What Does it Mean For XAU/USD?
6 mins ago

Will We See A Deeper Retreat in Gold Ahead and After the FED, ECB?
16 hours ago
Can the ECB Keep the Rate Hike Pace as Eurozone GDP Contracts?
EUR/USD has been bullish since October, but the move might have come to an end and we are seeing a slow reversal lower ahead of the ECB
18 hours ago
Comments
0 0 vote
Article Rating
Subscribe
Login
0 Comments
Inline Feedbacks
View all comments
6 Yrs
0
POPULAR CRYPTO FIGURES
Signals
<% signal.pair %> <% signal.action %>
SL: <% signal.stopLoss %> N/A
TP: <% signal.takeProfit %> N/A
<% signal.status %>
Trade Now
Trade Now
<% signal.comment %>
See more
Closed Forex Signals P/L (Profil/Loss)
Economic Calendar
Wednesday, February, 01 2023
10:00GMT
CPI Eurozone (YoY)