GBP/USD Stuck Between 2 MAs – Are You Trading the Range? - Forex News by FX Leaders

GBP/USD Stuck Between 2 MAs – Are You Trading the Range?

GBP/USD has been in a downtrend during the first two days of the week and the miss in the UK construction PMI report yesterday didn´t help the poor Quid either.

Today though, is another story; the services report jumped up to 55 PMI points which puts this sector in a pretty decent place. Right after the release, I heard Brexiters scream and jump for joy, as if Brexit was over and the economy was picking up.

Instead, Brexit is just beginning and the British economy is weakening. This was just a slight monthly jump in a very bad quarter (Q1 2017) for services.

Nonetheless, the Pound loved it and it jumped about 60 pips after the release. It´s a bit of a relief receiving confirmation that the economy is not falling apart but as I said, this is just the beginning and there is a lot of difficulty expected in the coming months/years.

Anyways, the jump wasn´t enough to take us above the 50 SMA (yellow) on the H4 forex chart. As you can see, the price is stuck between the 50 SMA on top and the other three MAs we usually use. For new followers, the moving averages we use are 50 simple (yellow), 100 simple (green), 100 smooth (red) and 200 smooth (purple). 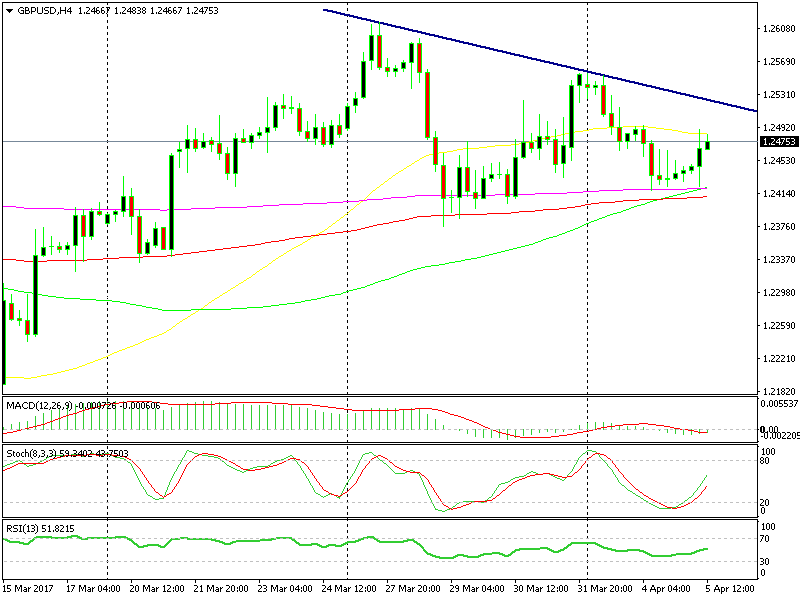 The range is quite visible

There are more moving averages at the bottom which make the support at 1.2400-20 stronger than the resistance which comes at 1.25. But right now we´re closer to the top, so we may as well see a reverse.

Actually, playing this range for now seems sensible. Stochastic will soon be overbought when the H4 candlestick closes, which will give sellers another reason to sell.

I will probably say the same thing if/when we get close to 1.240 again. In fact, the support is even stronger since the 50 and 100 MAs are standing right there on the daily chart.

I don´t know if or how many forex signals we might open in the next few trading sessions, but if the price bounces between these two MAs, then you can play the range by yourself and not wait for our confirmation (signal).

Just one thing to keep in mind though, you must watch the price action for a few minutes when it gets near the top/bottom of the range. One of the two sides will have to go at some point and we don´t want to get caught in the wrong direction.