Too Soon To Go Long USD/JPY?

USD/JPY has been in a steep downtrend during the second half of March. This in itself is the second wave of the bigger downtrend that started in January.

We´ve been sliding relentlessly and have gotten pretty close to the 1.10 level several times, but without being able to break it.

In the last two weeks alone, we've tried this massive support level four times. Yesterday, USD/JPY sellers had a last try after the FED FOMC minutes sounded sort of dovish, or at least not as hawkish as the market was expecting.

But again, it wasn´t enough to push below 1.10 which makes you think, is this level too strong to be broken? Have the sellers given up? 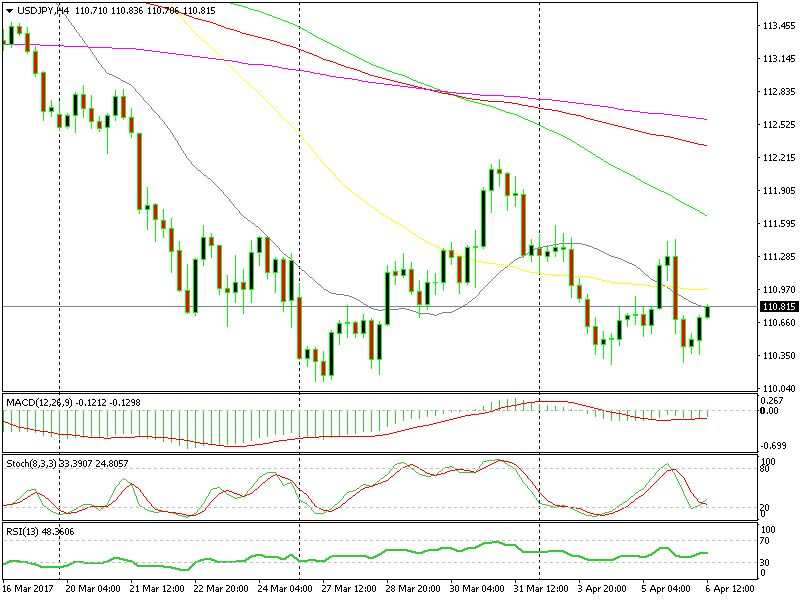 The highs have been getting lower recently

In my opinion, it is a bit too soon to go long on this forex pair right now. True that the trades have been reversed from sell to buy every time we got close to 110, but the jumps have been getting smaller. Last week we jumped above 112 after two attempts at 110, while yesterday we jumped to 111.45 before diving back down again. Today, we can´t even take out 111.

As you see, the pullbacks have been getting lower and the attempts to break 110 have been getting more frequent. This means that the selling pressure remains strong, that´s why I don´t think that right now is the right time to open a long term buy forex signal.

Somehow, judging from the price action, I have this feeling that 110 will go soon just to trigger some weak stops below 110. If that happens, 108 would a good place to look for long term long positions in this forex pair.

Is the Bearish Trend Over for USD/JPY?
23 hours ago