An Update on Gold – A Buyer-Dominated Instrument

Today in the early Asian sessions, the gold prices soared to their highest level in five months, fired by diplomatic disputes between the United States and other world powers. As we discussed earlier in our morning brief, both Syria and North Korea are on the table.

Investors from all over the globe restlessly monitored ongoing developments in North Korea after Pyongyang warned the U.S. with an “annihilating strike.” Over the weekend, North Korea paraded a variety of missiles in a huge military display in central Pyongyang.

What Events Are Likely To Impact Gold

Today, China's National Bureau of Statistics is likely to release the first quarter's gross domestic product (GDP), a preferable metric which focuses on measuring economic growth. Besides that, we have industrial production, retail sales, and urban investment on the table. 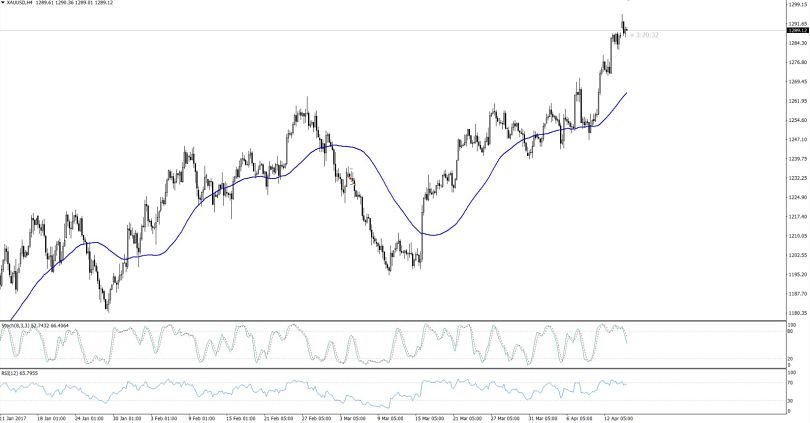 Recalling our weekly update, gold has been trading exactly as per our recommendations. Previously, it edged higher to hit our take profit level at $1280 on the breakage of $1260, and now our next target is $1302.

Having a look at the 4- hour chart, the RSI is holding at 66 which is signaling a bullish bias. In addition, the precious metal has filled the early morning gap as well. It's all set to continue its bullish moves, but we really don't have any volatility in the market. Personally, I think that we should not enter into the market today as the market seems to have no trend and prices are awaiting a fundamental reason to get a bullish or bearish power.

Buying Gold Today, As the Pressure Remains Bullish
51 mins ago

Gold Steady Under $1,665 - Downward Trendline to Drive Downtrend
10 hours ago