GBP Pulling The Euro Up - Forex News by FX Leaders

GBP Pulling The Euro Up

Yesterday the British government suddenly announced a snap general election. It came as a surprise to everyone, especially seeing as PM May had previously opposed elections.

However, politicians are the biggest opportunists and with Labour party now being in the worst of places, the stars have aligned for May. So, why waste the opportunity to strengthen her position before EU/UK negotiation start?

Anyway, the Pound is loving it and it seems like it´s helping the Euro as well. EUR/USD surged nearly 100 pips yesterday after the announcement.

I suppose the market is receiving a glitter of hope that the Brexit process might reverse. Though as I said yesterday, this seems unlikely.

There´s also some hope that the UK picks a soft Brexit after May strengthens her hand, which does not look as gloomy as a hard Brexit.

So, the Euro and the Pound are feeling hopeful, although I don´t see much hope in this. Yet, the hope has paired with techs and that´s what the market needs. 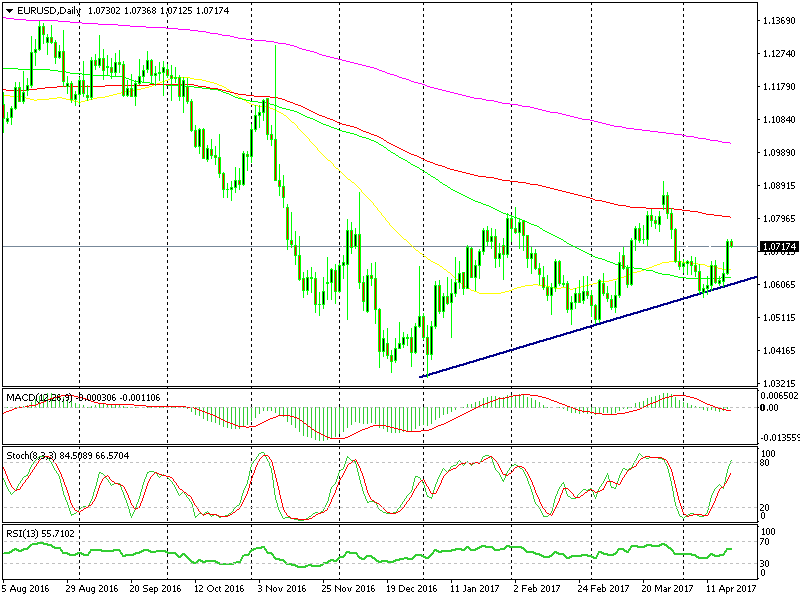 If you remember, we highlighted the ascending trend line a few days ago in EUR/USD and it looks like it has held up again.

We also highlighted a trade idea on that post, going long at the trend line. We didn´t open a forex signal down there, but I hope some of you took that trade because you must be sitting on a 100 pip profit by now.