Yesterday I predicted that the market would be volatile but I never expected the market to be this volatile. The volatality was massive and unpredictable. But thankfully, things remained in our favor and our forex trading signals on the WTI Crude Oil, Nikkei & EUR/USD closed at target levels, helping us secure a good number of green pips.

Before we begin our trading day, let us understand what actually happened to the market. Why did the sterling (surged 1.52% to trade at $1.2754) and single currency Euro (surged 0.5% to trade at $1.0695) surge massively against the U.S dollar? These surges came as a result of U.K Prime Minister Theresa May's call for snap elections on June 8.

Yesterday, the GBP/USD edged dramatically higher to place a new yearly high at $1.2902. As we discussed at the beginning of our report, the prime minister of the U.K, Theresa May, called for general elections.

For now, Theresa May will need to obtain the support of 2/3 of the members of parliament on Wednesday's vote for approval of the elections.

A strong majority of voters who vote for the general elections will be considered a positive sign for the Pound. This will signal strong negotiating power on the side of the British and ultimately weaken the Scottish National Party agenda's to call for a second Scottish referendum.

Today, we may see another wave of volatility in response to voting updates. The sterling may drop to its previous trading zone of around $1.2500 if the majority of the government remains against the general elections. 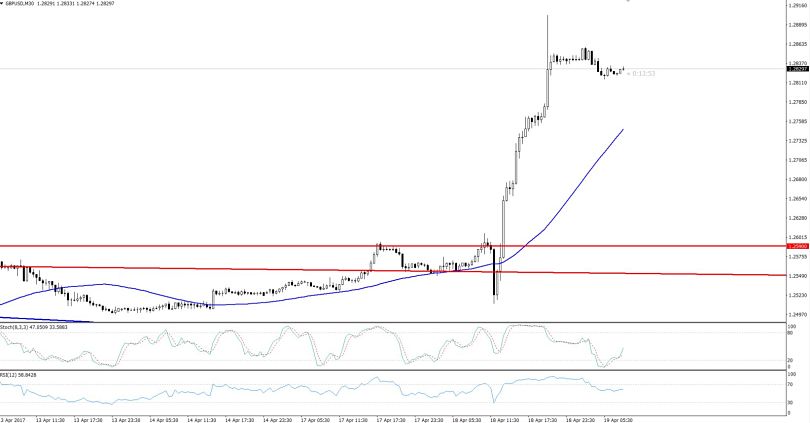 As we can see in the hourly chart, the GBP/USD has entered into the overbought zone. This is particularly true for the RSI (Relative Strength Index) which is still holding at 75. The 50 periods EMA is supporting a bullish bias in the pair.

In addition, the GBP/USD has formed a bullish engulfing candlestick pattern in the daily timeframe which is signaling investor's buying sentiment. However, the pair needs to retrace a bit before showing a further bullish trend. First it's likely to complete 23.6% Fibonacci retracement at $1.2808 and a break below this level will lead it towards $1.2755 (38.2%).

In my opinion, we shouldn't add any trade in the sterling currency pairs pending the release of further updates on the votes. However, for a quick profit, traders can take up a sell position below $1.2800 with a take profit of $1.2760.

The EUR/USD soared sharply due to its strong positive correlation with the GBP/USD. Most of the bullishness in the pair was due to the weakness in the greenback. Investors increased their bets on the Euro while lowering their positions on the U.S dollar, the most focused on and uncertain currency at the moment.

However, the pair is still under pressure due to the upcoming French Presidential elections, which are being held on April 23rd. Today, watch the inflation figures from the Eurozone for further clues about the next monetary policy meeting. 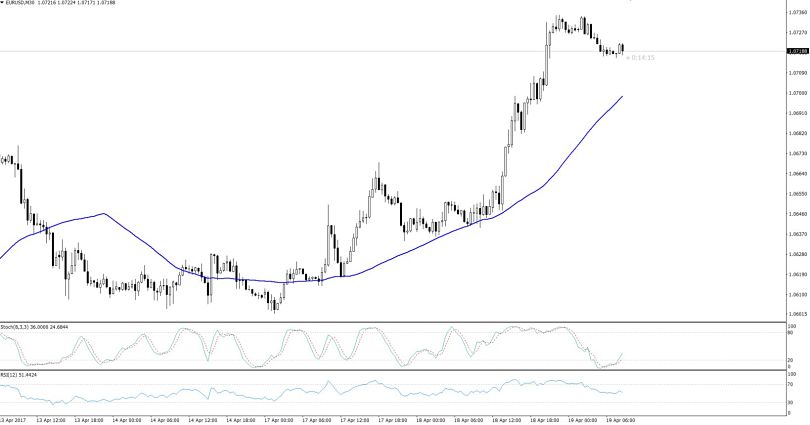 The EUR/USD finally made its way to the upside after consolidating in a narrow trading range of $1.0500 – $1.0660. The EUR/USD chart resembles the GBP/USD and has a similar analysis.

In the hourly chart, we can see the RSI is crossing 70 from above which means investors are selling the overbought currency pair to buy it again at a lower price. Having said that, the pair is likely to come down a bit to complete the 23.6% retracement at $1.0710 and also at $1.0690, the 38.2% Fibonacci retracement level.

The pair is in the middle of trading levels. I'm going to wait for the market to lower a bit before entering a new position. Regardless, $1.0690 is a very strong buying level today.

Traders, the market may have a second wave of volatility today due to any update from the United Kingdom. Hence, you need to follow the proper money management in each of our Forex Trading Signals.

Keep following us, more trades are on the way!