Happy Friday, traders. The last day of the week seems really exciting, particularly after a great week. Considering the thin volatility due to the Easter holidays, our trading signals did really well.

Overall, nearly all the trading instruments remained highly volatile at different timeframes upon the release of the latest fundamentals. For example, the GBP/USD was a major mover this week. It soared more than 390 pips after the U.K.'s proposed early elections. The Sterling also caused a bullish trend in the single currency Euro due to their strong positive correlation.

Lastly, the dovish remarks from Donald Trump in regards to the U.S dollar, and the ongoing conflicts between the U.S, North Korea, and Syria kept the dollar weaker. This resulted in a boost in demand for the haven assets such as Gold and Silver. We will discuss the Gold further, but before then let me highlight the major macroeconomic events today.

Today, we have several economic releases coming from the Eurozone, although these aren't very high impact. However, their collective impact could shake the Euro.

The yellow metal Gold continued to trade in a well maintained narrow trading range of $1276 – $1282 in the morning sessions today. As mentioned earlier in my previous report on Thursday, the Gold is likely to break out but investors are searching for clear evidence as to which side it will break on.

There is no one reason behind a bullish Gold. Over the previous week, it remained supported due to global uncertainty. Whereas the massive drop in the U.S dollar extended support to falling gold prices.

Additionally, as per the Fed’s Beige Book, the U.S economy has shown nominal growth despite better than expected labor markets and upward pressure on wages. For instance, their unemployment rate fell to 4.5% from 4.7%. Slower economic growth increases concerns and risk in the market.

Lastly, the WTI Crude Oil prices fell rapidly after the EIA recorded a less than expected draw in crude oil inventory figures. This means the market has used less crude oil in the previous week, perhaps due to less demand in the market. The lesser demand can result in fewer sales and falls in corporate earnings. Therefore, it's rational to invest in safe haven assets rather than equity markets. 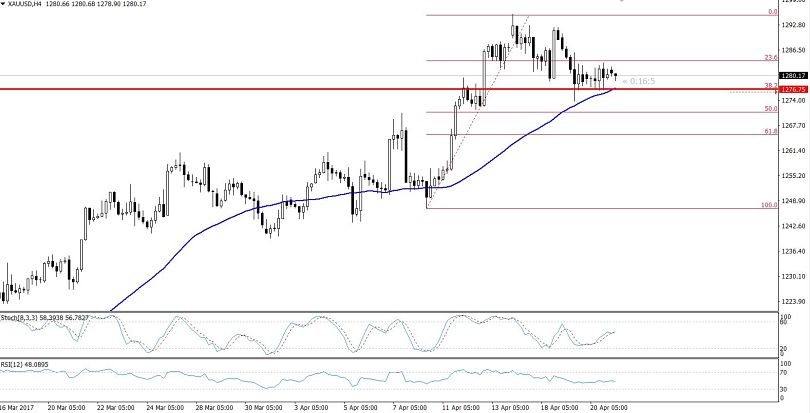 I really don't see any change in the technical side of the Gold. It's still consolidating above a strong support level of $1276 while having a resistance at $1283.

I find it amusing that the Gold has formed almost every type of candlestick pattern such as doji, hammers, bearish and bullish engulfing but failed terribly at coming out of the $1276 -$1283 range. Besides that, the precious metal Gold has also formed a descending triangle pattern in the hourly timeframe. Let me add that the descending triangle patterns are meant to break downward.

In the hourly timeframe, the Gold prices are still holding below the 50 periods EMA along with the RSI below 50 and both of our technical friends are suggesting a bearish bias for the metal.

We have 3 trade ideas for today.

Friday often comes with huge volatility as most traders try to offset their positions before the weekend. Hence, we need to strictly follow our money management strategies and trail our stop as soon as our positions come into the profit zone.

US Dollar Dips as Yellen Calls For More Stimulus, Without Worry of Debt
6 hours ago
Comments