UK Data Disappoints, The Downside In GBP/USD Is In Danger – Going With The Break? - Forex News by FX Leaders

UK Data Disappoints, The Downside In GBP/USD Is In Danger – Going With The Break?

As we said in our previous update, the British Pound would rightfully feel pressure if retail sales posted a negative number around -1%. The number released about an hour ago was -1.8% which was not at all in line with expectations.

Retail sales started to form a negative trend in December, January and February but they bounced back in March. This eased some worries about the UK consumer being forced into a tight angle due to higher prices from the weaker Pound.

But today we another negative number that didn't reach expectations, so the negative trend is official now, despite the yearly number remaining positive.

Today´s miss in retail sales data sent GBP/USD about 50 pips lower but the support area around 1.2770-80 held the decline once again and now we have retraced some of the losses, climbing back above 1.28.

That support level is still under threat though as we remain close to 1.28. Normally, this would send GBP much lower, but politics always need to be taken into consideration nowardays and sellers are trying to be cautious. 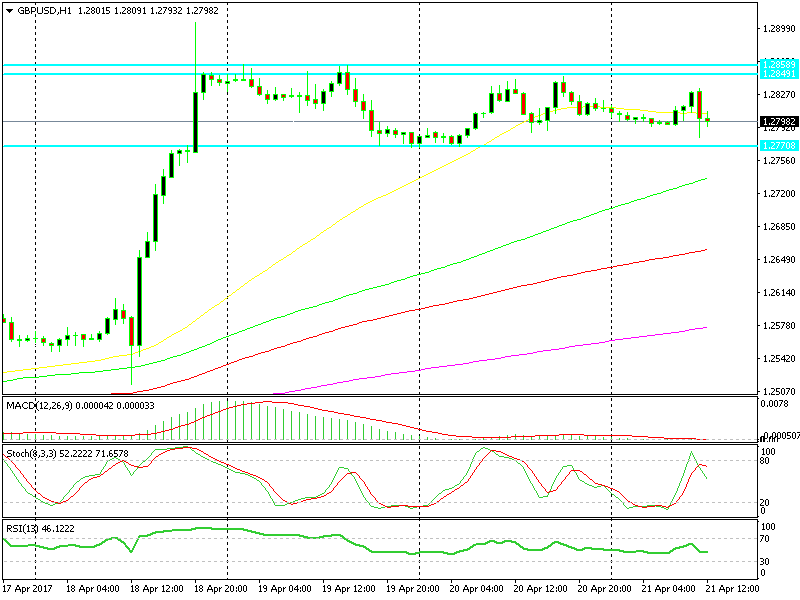 The direction is uncertain even after the negative retail sales. Although, if 1.2770 goes then it´s likely we will see a substantial move lower. So, I´d place a sell pending order below 1.2770 and stop loss above 1.28 for a 60-70 pip target.

Alternatively, if we don´t break below soon, this forex pair is likely to reverse higher and threaten the resistance at the top of the range, which comes around 1.2850-60.

Today is Friday and the expected economic data for the rest of the day is very light so I don´t expect a break on the upside. I don´t think buyers will have the nerves to push past it on a Friday afternoon, so I´d open a small sell signal up there if we get there in the next few hours.