A couple of weeks ago we spotted a long term trading opportunity in the Canadian Dollar. This forex pair has been climbing higher, particularly since oil prices started tumbling several days ago.

1.3520-30 was standing in the way though and it stopped the climb for a few days, but today the buyers finally found the force to push past it.

So, 1.36 here we come. This is a long term resistance level; it has turned down the price twice in November and December last year, so it´s a good level to consider opening a long term sell position. 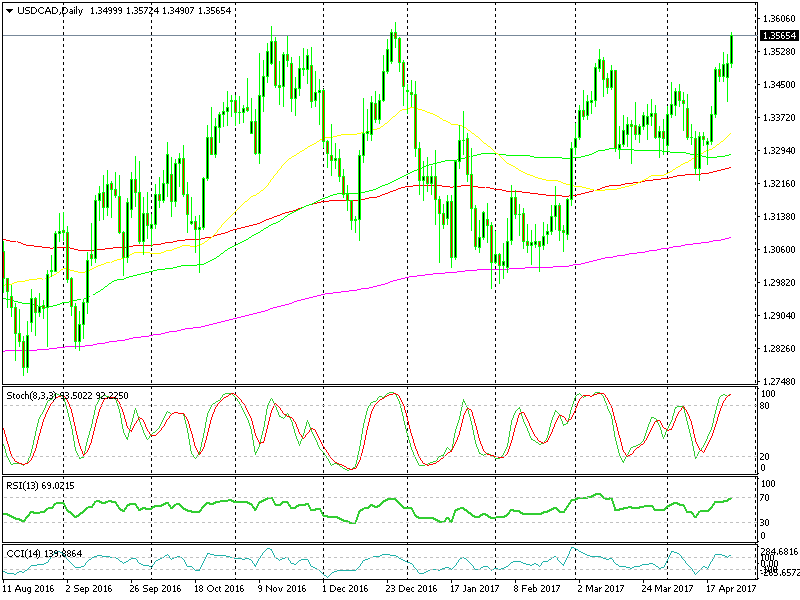 1.36 is getting ever closer

This idea looks great both technically and fundamentally. Technically, all indicators are overbought in almost all timeframe charts, daily, weekly.

Fundamentally, the Canadian economy is doing pretty well and the Bank of Canada (BOC) will have to admit it sooner or later.

House prices for example, have been surging in Canada, in the last few years. The prices have nearly doubled in some areas, particularly in big cities. The threat of hyperinflation is real. Hopefully, this will force the BOC to start tightening the monetary policy by hiking interest rates.

So, all fronts seem to scream sell, but first, we have to wait for oil prices to stabilize after a $4-$5 decline in the last week or so, before pulling the trigger.

By that time, we should have reached the resistance level at 1.36. This could happen today seeing as we are only about 30 pips away, so hang around guys. Alternatively, you can open a long-term signal right now as we are relatively close.

The problem with this forex trade is that there isn´t any level above 1.36 to place the stop loss, so we have to leave it open and manage it manually.

USD/CAD Failing at MAs, Despite Dovish Remarks by BOC's Macklem
16 hours ago