Trump’s ‘Plan’ Is Out, Now What? - Forex News by FX Leaders

Trump's fiscal plan is finally out. Well, not exactly the plan, just the guidelines for the plan. It´s an A4 paper with guidelines on the individual tax reform, business tax reform and the goals it aims to reach.

As you see, it´s not really a detailed plan but we got an idea of what´s to come, that´s if it passes through Congress first. 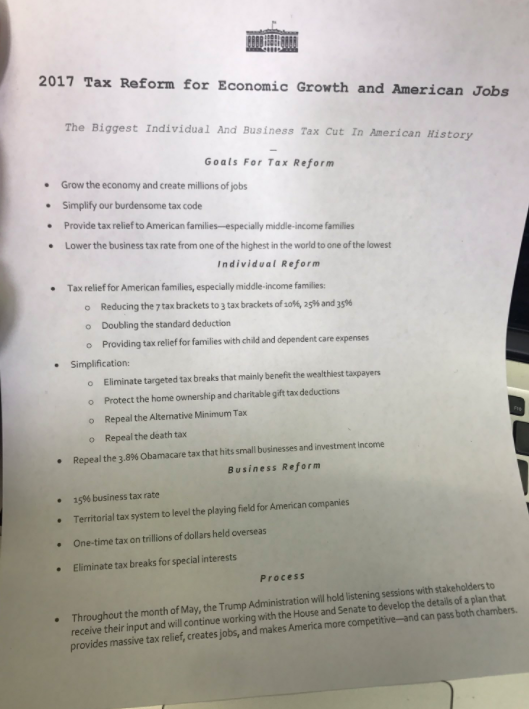 This is Trump's entire fiscal plan

As you see on the photo of the A4 sheet above, some of the guidelines, such as the individual tax brackets which will be reduced to just three, 10%, 25% and 35% and the 15% tax rate for businesses, are clear outlines. Some of the other guidelines are not so clear.

So, that´s the reason there is uncertainty in the forex market now. The Buck lost a few pips, particularly when compared to the Yen. However, that´s nothing when you imagine the massive impact this fiscal plan could have on the financial market.

It´s true that a lot of it had been priced in when the EUR/USD fell from around 1.10 to 1.0330s while USD/JPY surged nearly 20 cents in the last two months of last year after Trump won the presidential elections. But now USD/JPY has lost about half the gains while EUR/USD is back up near 1.10.

So despite the uncertainties, I still think that this plan is USD positive and the USD should still see some heavy bids.

It´s for this reason that I´m thinking about opening a long term sell forex signal in EUR/USD. The other reason to go short on this forex pair is that the ECB president Mario Draghi will be holding a press conference soon. I´ll explain more about this in the next update, so stay tuned if you want to sell this pair too and if want to know the other reason.

Forex Signals Brief for September 28: More FED Speakers and US Data to Keep the USD Up
2 days ago