A Technical Look At EUR/CHF – Are You Selling Soon? - Forex News by FX Leaders

A Technical Look At EUR/CHF – Are You Selling Soon?

Since the summer of 2016 the EUR/CGF has been under continuous selling pressure. The 1.0670-80 support held the sellers for quite some time but the pressure kept building and that level cracked earlier this year. The price action tells the story; because the highs kept getting lower in every pullback, it was just a matter of time before it cracked.

But now the situation might have changed. After Le Penn didn´t win the first round of the French elections, the Euro opened with a 200 pip gap higher.

Though the gap in this forex pair is just 100 pips, that may be enough to start a trend reversal. Sure enough, it looks like the trend is reversing in the weekly forex chart.

The price moved above the 50 (yellow) and 100 (green) moving averages last week and hasn’t moved back down since. This is a sign that the trend might be reversing. I don´t think we will see 1.20 soon where the SNB (Swiss National bank) peg was, but a couple hundred pips should do it for this pair.

The 200 SMA is providing resistance

This is true for the bigger trend, but in the daily chart this upward run might have reached its limit for the time being. The 200 SMA (purple) is providing resistance on top and both technical indicators are overbought.

We might be seeing a retrace down in the following few trading sessions or days, so if you want to sell it´s best to do so near the 200 SMA for an 100 pip target.

This is a bit risky since the wave might have already changed for this pair, but we might as well do something. By the way, the 20 SMA on the monthly chart comes at the same level as the 200 SMA on the weekly chart, which should add some additional strength. 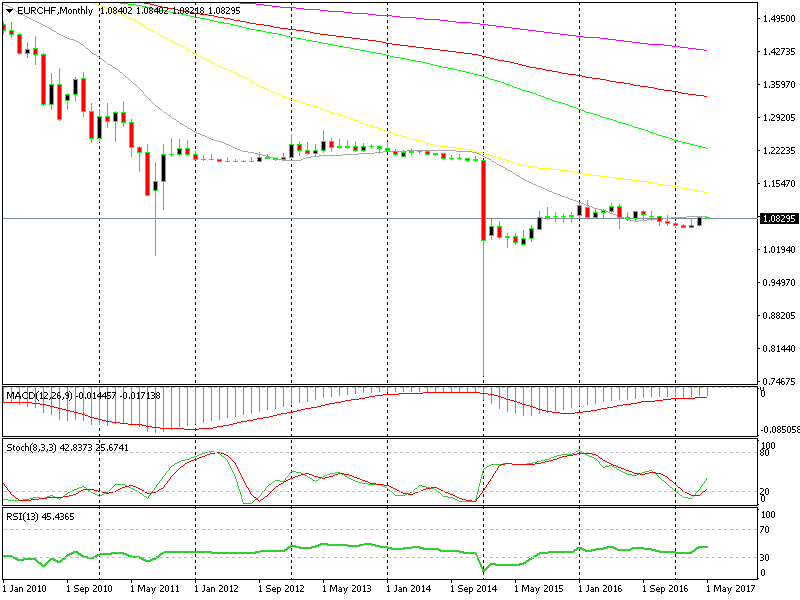 The 20 SMA is also providing resistance