Economy Is Doing Alright, While USD and Commodities Falter – Weekly Analysis 1 – 7 May

We are kicking off May with a Brexit talk again. Forex events this year will be consistently focused around this topic… or Trump… or the EU. The UK Prime Minister Theresa May threatened to walk away from the EU without a deal since it took all EU members just four minutes to pass a hard line stance on Britain over the previous weekend.

The most important event this week, though, was the FED meeting on Wednesday. Nothing exceptional was supposed to come out from the FOMC statement, and in fact, it was more or less neutral compared to the March statement.

Yet, somehow the rate hike probabilities for June jumped to 93% from around 60%, but that didn´t help the Dollar one bit. I can´t quite put a finger on why this happened, but the market sentiment which is taking things in its hands now. It became even more frustrating when the US employment figures hit the wires. Instead of gaining, the Buck entered another selloff period. 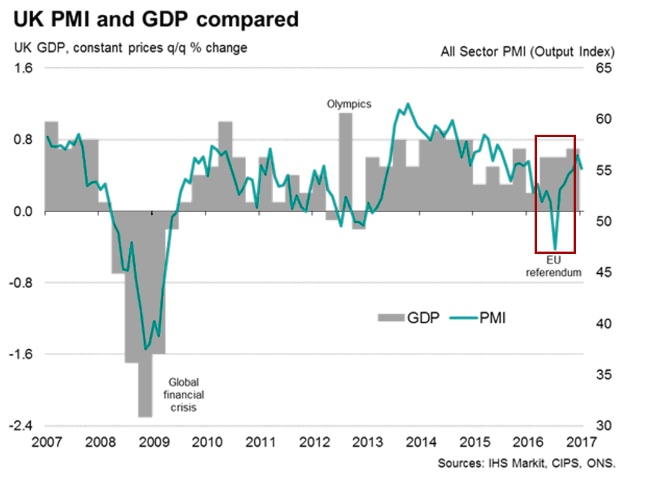 The global economy is better off this month, including the UK

Last month, we had quite a few forex signals in AUD/USD and NZD/USD. All of them were sell signals and they all closed in profit, apart from one.

So we decided to keep the same strategy for these two forex pairs, at least until the fundamentals change. Thus, we started the week with a couple of signals in these two pairs. Unfortunately, the market decided to put a decent pullback at precisely this time, so those two signals ended up in smoke.

And so, we weren´t very fortunate on Monday but got our mojo back during the week, although we couldn´t close this week in profit. We did make a hefty profit in the other instruments; our commodities trader and analyst Arslan managed to make 238 pips in Oil and Nikkei, without factoring in gold.

So, it´s been a good week in total for the FXL signals service, and I´m sure we´ll recover in forex as well since the loss was minimal (only 25 pips). Hopefully, we will see some large moves going our direction next week.

Last weekend, EU leaders passed a hard line stance for EU-Brexit negotiations and there were comments coming from Brussels HQ that the EU mob thinks UK PM May is living in a parallel universe. Her often arrogant comments on Brexit seem a little naive, and I think it´s more like she is playing her hand before the game even starts.

Anyway, those comments from both sides were supposed to send the quid tumbling, but the GBP/USD closed the week at the highs, near 1.30. Although, half of that came from the Dollar side. Despite some great economic numbers coming from the US, the Buck has remained on the back foot all week.

Non-farm employment data in the month of April jumped back above 200k, and cooled the worries that built up during March worries after the same report missed the expected numbers by quite a lot. Data from wages picked up nicely as well in April, and the unemployment rate declined to 4.4%.

That all looks great on paper for the USD, but the reality was different this week. The odd for a jump in the rake hike increased to 93% after the FOMC statement on Wednesday couldn´t do anything to spark a short-lived USD rally. The only major currency which ended up lower against the USD was the Yen. By the way, the US health bill finally passed on Friday… so long Obamacare.

Most of the world was off on Monday for Labour Day, but the industrious US kept working. It would have been better if America just stayed at home that day, as the economic figures from across the pond that day were terrible. Personal spending and income missed their expectations, the construction spending declined by 0.2% and the ISM manufacturing PMI disappointed as well.

Although, as the week progressed the numbers from the US started getting better. Services and non-manufacturing PMI beat expectations on Wednesday, while on Thursday the annualized unit labour costs (wages) grew by 3%, nearly twice as last month.

It got even better on Friday, as the NFP (non-farm employment change) jumped above 200k again, with the unemployment rate falling to 4.4%.

The USD couldn´t take advantage of the better numbers this week, but the GBP did what it could to profit from the impressive UK economic numbers. Manufacturing, construction, and services beat expectations this month, so the UK economy is still doing great despite Brexit.

EUR/USD jumped the 100 smooth moving average (red) a couple of weeks ago after the first round of French elections. But right now it is facing the 200 SMA (purple), which is sitting only a dozen pips above where the price closed on Friday.

We have the second round of the French elections this weekend, and this forex pair might open with another gap when Macron wins, which would be another handout for EUR/USD buyers. 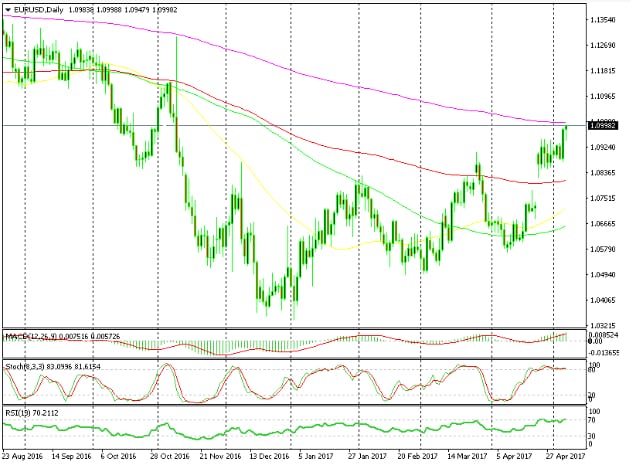 The 200 SMA is standing right above the current price

The daily and weekly forex charts are severely overbought but besides that, the 100 SMA (green) is standing right where we are now (Friday close) and the 1.10 resistance level is a pretty big one.

But as I said, the fundamentals are stronger right now and Macron´s win could take this pair anywhere tomorrow (although it is already priced in, or so I think). 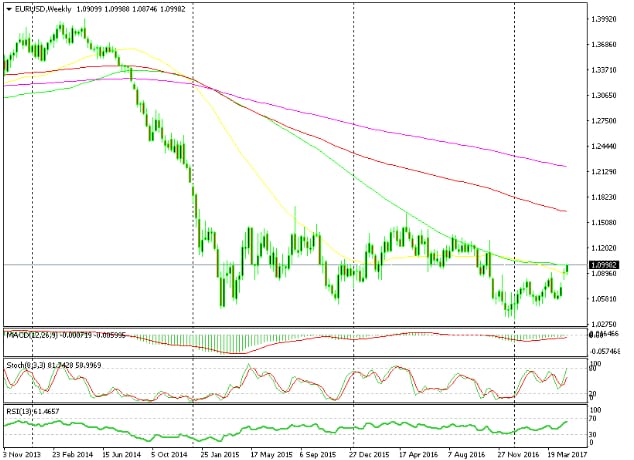 In the weekly chart, it is the 100 SMA which is providing resistance

The first week of May is over, but the one thing to notice was the strange price action in USD pairs. The economic data and other fundamentals were supposed to support the Buck, but most of the majors beat the h*ll out of it.

We´ll see if the sentiment changes next week, but first, we have to get over the final round of French elections. The price is very close to some very big levels in a few forex pairs so we might see some large moves this week – get ready guys!