Bullish Breakout In WTI Crude Oil – Inventories Are Out!

Yesterday in the New York session, the crude oil soared sharply to break above the bullish flag in the 4-hour chart. In reference to the previous update, Bullish Flag In WTI Crude Oil – Crude Oil Inventories Ahead, we advised that this pattern demonstrates investors bullish sentiment and sooner or later is likely to break upside.

We shared a Forex Trading Signal to enter a buy position above $46.80, which eventually closed at the take profit level of $47.3. I will share another trading signal and later we will be explaining the fundamental and technical reasons behind the bullish calls.

In the early European sessions, we shared another trading signal to buy the WTI Crude Oil at $47.80 with a stop loss at $47.2 and a take profit of $48.15. At the moment, the trade is already in more than 15 pips profit. So, I advise traders to drag your stop loss at the break-even points.

First – The investors increased their bets on the crude oil upon the release of inventories figures from the Energy Information Administration (EIA).

The data revealed an inventory draw of 5.25 million barrels in the previous week. The expected draw was around 1.8 million barrels. As a consequence, we encountered a huge buying trend in the crude oil and it placed an intraday high of $47.750. It's still maintaining the bullish momentum. 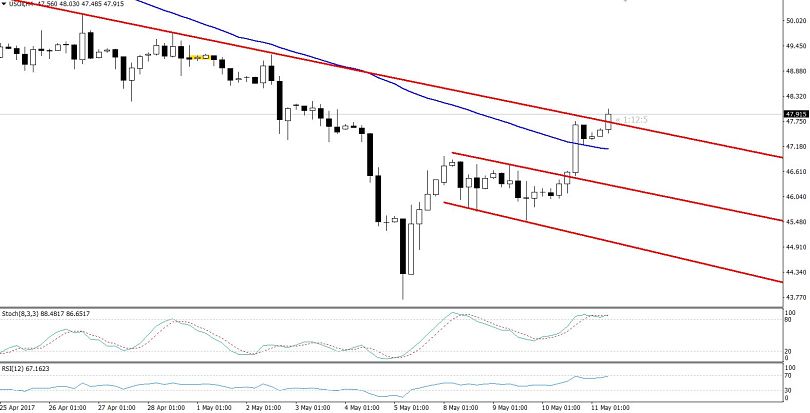 Secondly – The black gold violated the bullish flag pattern which can be seen in the 4-hour timeframe. The pattern was extending a resistance at $46.60 which later failed to resist the crude oil prices.  It continued the bullish rally upon the release of the dramatic draw in inventories.

For now, the oil prices are breaking above a descending trend line resistance at $47.70 which seems to be a potential trading opportunity for us. On the flip side, the momentum indicators, RSI and stochastic are also signaling a bullish sentiment of investors. Lastly,  the 50 periods EMA is providing a strong support at $47.20.

Selling Crude Oil After Buildup in EIA Inventories
13 hours ago