A Negative Week For Majors, But A Good Week For The US – Weekly Analysis 8 – 14 May - Forex News by FX Leaders

A Negative Week For Majors, But A Good Week For The US – Weekly Analysis 8 – 14 May

This week started off with positive vibes. Macron won the French elections last Sunday and most major currencies opened with another gap higher, obviously at the expense of the USD.

But it didn´t last long; as we predicted in one of our updates on Monday; the gap closed and the USD started reversing.

That was the beginning of the downpour for major currencies. The Japanese Yen didn´t need any reasons to tumble, the market sentiment shifted unexpectedly when USD/JPY was around 1.08 and since then it hasn´t looked back.

This was a negative week for NZD and GBP as well. Both central banks held their respective meetings this week, but the market didn´t like the outcome of either of them and down went the GBP and NZD.

It looked like it was going to be e victorious week for the Buck, but it wasn’t meant to be. The US inflation and retail sales report slightly missed expectations and that was all the forex market needed to dump the USD.

So, we can say that there were no winners this week, only losers, and almost all of them major currencies. Although, that didn´t affect our trading as we ended up with a nice 124 pip profit. 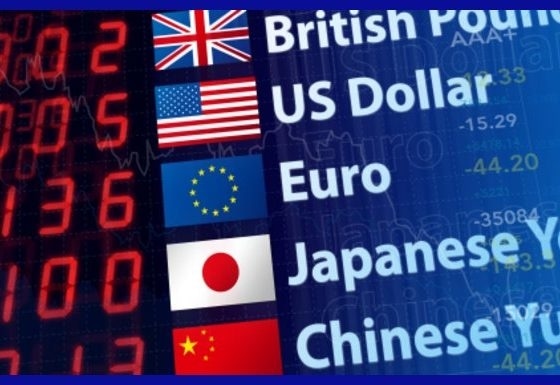 All majors ended in a loss this week, so which one ended up?

So, this was a negative week for currencies, but the market was sort of predictable, to be honest. When things went up, they stayed on track, such as USD/JPY. When they were going down, they remained on the back foot (such as NZD/USD).

Speaking of NZD, we decided to shift our bearish bias from AUD/USD to NZD/USD. In the last several weeks, we have issued quite a few sell forex signals in AUD/USD and we already had three winning signals by the middle of the week.

But, the RBNZ (Royal Bank of New Zealand) remained neutral, which was taken as a dovish signal by the market – and the Kiwi started diving.

So, we decided to jump on the NZD/USD southbound train on pullbacks. We opened two forex signals on this forex pair this week, both of which closed in profit.

There were a couple of unfortunate events for us this week, such as the jump in EUR/CHF on Sunday evening when the Euro opened with a gap higher, and so we got caught out by that move since we had a sell signal opened from the previous week. Also, don't forget the surge in EUR/USD after the US economic numbers missed expectations on Friday afternoon.

Nonetheless, we had enough winning forex signals to end up with a 124 pip profit, particularly in GBP/USD, AUD/USD and NZD/USD, so it´s been a good week for us regarding forex signals and it went pretty well for the commodity signals as well.

The French elections are now over and Macron is officially the next president. He is strongly pro-EU and has promised to reform the Block, which has been received well by EU officials, so the entity is saved for now.

There are the German elections next, but Merkel is a strong favourite and the opponent Schulz is pro-EU as well. He was the president of the European Parliament until the recent resigning.

Anyway, politics apart, this was supposed to be positive for the Euro, but instead, it was heavy all week. But as we mentioned in one of our updates, the market was “buying the rumour” before the elections, so now that everything was over, they had to “sell the fact”.

Although, EUR/USD retraced some of the losses on Friday afternoon, but that came from the USD side. US retail sales and CPI/inflation came out positive but slightly below expectations on Friday and the market didn´t like that at all, even though rate hike odds for June are estimated near 100%. So, the Buck ended the week on the wrong foot.

But, so did all the other majors, hence the title of this weekly review. It was obvious that the Yen was going to end up down, since it already had lost 400-500 pips in the last few weeks.

Besides that, the NZD had a tough week as well and it was because of the market expectations. The market was expecting a hawkish statement from the RBNZ but the statement was dovish and sank the Kiwi.

The fate of the GBP was the same but it came as a result of negative economic numbers from the Island. So, all in all, there was no real winner this week among the forex majors.

Australian building approvals and retail sales declined this week but the downtrend in AUD/USD slowed down. This is a sign that this pair might be bottoming out for the near term, so we have to keep that in mind for next week.

That wasn´t the case with the NZD, though, as it accelerated the downtrend. The market didn´t like the RBNZ statement and the Kiwi lost about 150 pips.

Speaking of central banks, the BOE (Bank of England) Governor Mark Carney couldn’t do much on Thursday to stop the Pound from falling after the disappointing manufacturing, construction and industrial output numbers that day.

There were more disappointing numbers to come on Friday, this time from the US.  CPI (consumer price index) inflation and retail sales missed expectations on Friday afternoon and the USD entered another wave of selling.

Only Europe remained upbeat this week, with German retail sales jumping by 1% and French and Italian industrial production beating expectations as well.

EUR/CHF has been in a strong downtrend during this year amid risk aversion sentiment in the market. Safe haven currencies, such as JPY and CHF, benefit when the market is feeling scared.

But, the course changed when Le Pen lost the first round of French elections – now this forex pair is about 300 pips higher now. 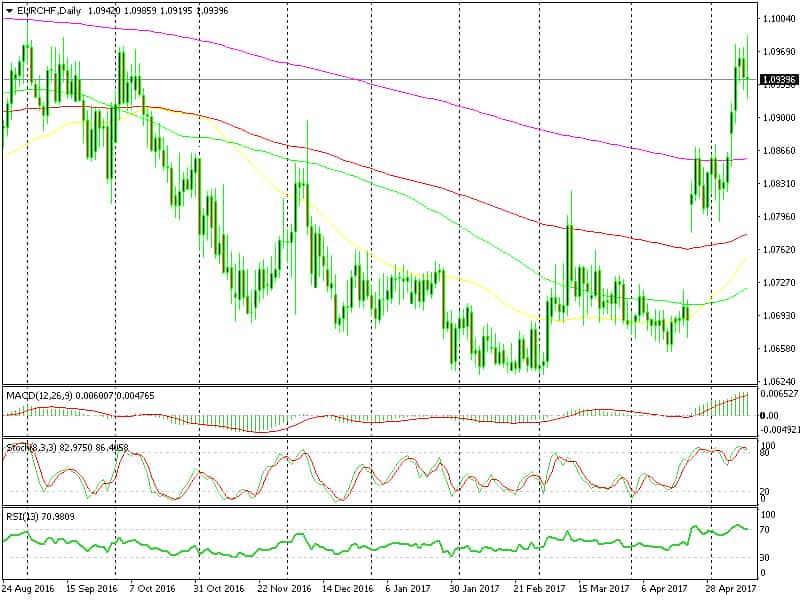 The 50 SMA (yellow) seems like a safer place to buy

The uptrend has been relentless in the last three weeks, but we´re approaching a big level. 1.10 has been a big level in this pair. The technical indicator on the H4 forex chart are heading down, but I don´t think we will see a reverse right now.

So, we might play this pair with a couple of buy short- term signals, probably around the 20 SMA (grey) or 50 SMA (yellow). 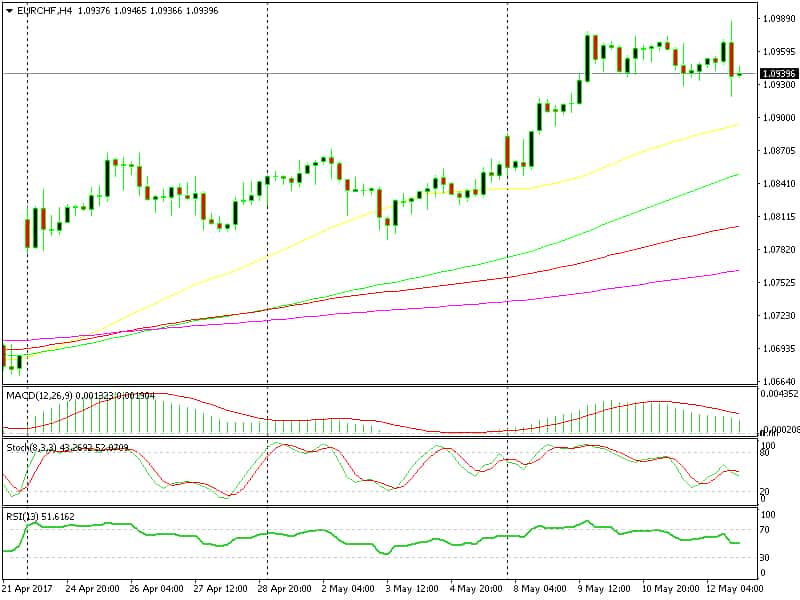 1.10 will be a big hurdle to overcome

Having said that, there is a case being built here for a long-term sell signal. The 1.10 resistance level is a big one and a 200 pip target to 1.08 is doable, so remain ready.

So, that´s it for the second week of May. AUD/USD is running out of milk, but a new trade has emerged for us, so no hard feeling for the Aussie.

The Kiwi downtrend has accelerated now that the market´s hopes for a rate hike anytime soon are crushed. We had a couple of signals on NZD/USD and intend to remain short again next week.

Forex Signals Brief for October 5: Will the USD Dive on ISM Services Too?
34 mins ago