Early in the morning we opened a sell forex signal in GBP/USD at 1.2930. The price had stretched too far up since Friday afternoon and both H1 and H4 charts were overbought, so it looked like a good bargain selling this forex pair up there.

But while GBP/USD stalled around there for a few hours, the commodity currencies kept crawling against the Buck. NZD/USD and AUD/USD reached the 200 SMA on the H1 charts and the 100 SMA on the hourly forex charts.

Opening one forex signal in each of the last two pairs, would be like going in with double the leverage and we already had a GBP/USD open signal. So we decided to sell NZD/USD only and leave AUD/USD alone for the time being, because the downtrend in NZD/USD is a lot stronger than the downtrend in the Aussie.

The price played a few games after we opened the signals, moving up and down in a 20 pip rage, but it made up its mind later and we´re now approaching the take profit targets in both forex pairs.

Actually, the GBP/USD signal just hit take profit and NZD/USD is only a few pips above there, so it was a good decision to open these signals. 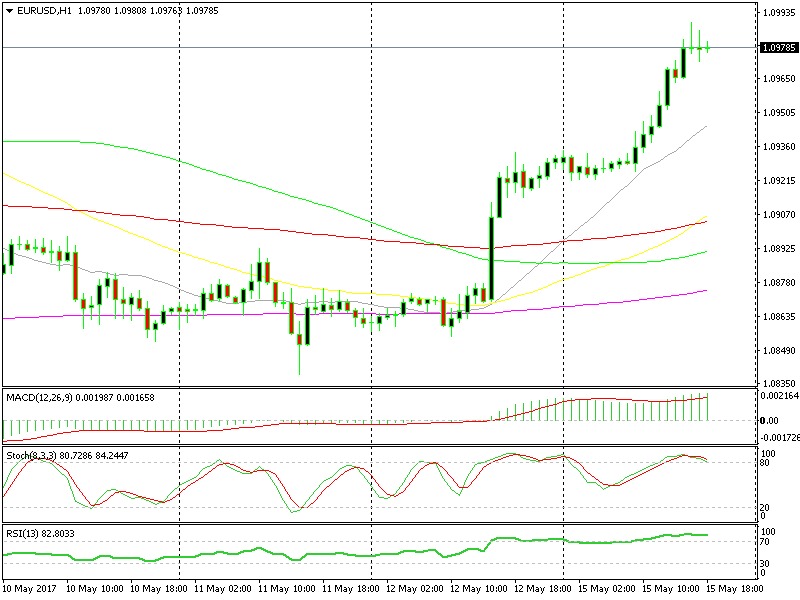 By the way, at the moment, I´m looking at EUR/USD as well. The buyers had another go at 1.10 today, but couldn´t quite make it and the last two hourly candlesticks closed as dojis, which signal a trend reversal. So, I might open a sell signal in EUR/USD now that our other signals closed.