Forex Signals Brief for May 18th – The U.S. Dollar Leaves Investors On The Breadline - Forex News by FX Leaders

Forex Signals Brief for May 18th – The U.S. Dollar Leaves Investors On The Breadline

There has been such amazing fluctuation in the global financial markets recently. The great turmoil wasn't limited to the Forex market, the equity and commodity investors also felt the heat. It seems like the fundamentals were in charge because, despite the oversold/overbought market scenarios, the prices continued to maintain their momentum.

Once again, U.S. President Donald Trump is behind this turmoil. The U.S. dollar drifted lower compared to its peer currencies, extending a bullish trend to the bullion and ultimately making the equities bearish. In our earlier brief, Forex Signals Brief for May 17th – U.S. Dollar On A Sinking Ship, we advised following strict money management strategies as these losses are only avoidable if we have proper stops placed.

The single currency Euro continued to trade bullish against the Buck for the fourth consecutive trading day. This week, the pair has gained more than 300 pips merely because of the weak dollar.

Yesterday, the inflations figures from the Eurozone extended a slight support to the Euro. Eurozone CPI inflation figures increased to 1.9%, (which was in line with the forecast), and higher than last month's figure of 1.5%.

Today, we have Mario Draghi, who is due to speak at the University of Tel Aviv. It is possible the speech will have a muted impact, causing no major fluctuations in the market. 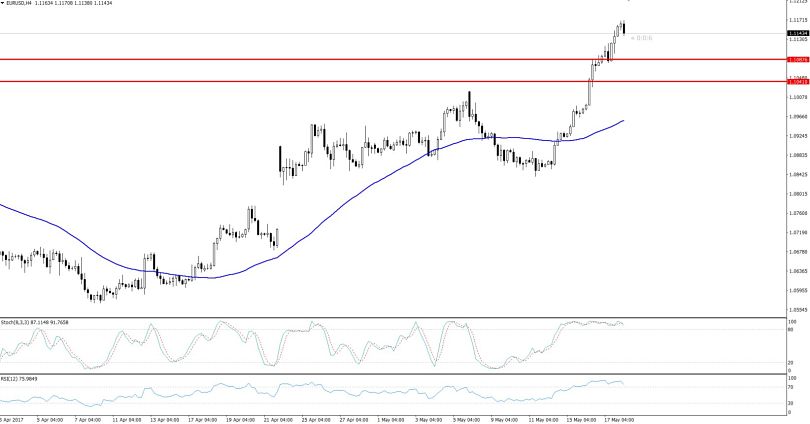 On the flip side, the 50-period exponential moving average is suggesting a buying trend. Since the prices are far away from from the EMA, we should try and seize the opportunity to catch retracement.

The impact of the weaker greenback wasn't only limited to the Euro, it caused solid gains in Japanese Yen as well. Most of the haven appeal arose from the latest news that U.S. President Trump suggested that F.B.I. Director James Comey end his inquiry into Trump's previous National Security Adviser Michael Flynn. As a consequence of this allegation, the U.S. dollar dropped even lower, pushing the market's demand for other securities.

Today in the early Asian sessions, the Japan's cabinet office released the Gross Domestic Product (GDP) figures which demonstrated an expansion of 0.5% in the first quarter along with 2.2% yearly growth, 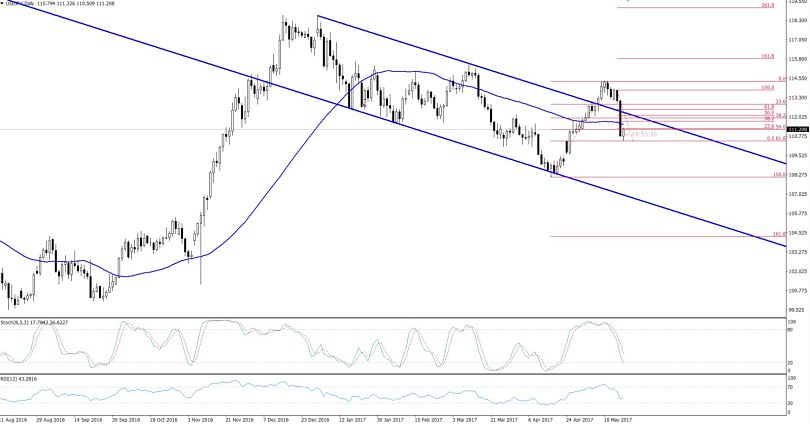 On the daily chart, the USD/JPY has completed the 61.8% Fibonacci retracement at $110.550. At the moment, the price is consolidating above the same (61.8% Fib) level, which suggests that a pullback in the pair is imminent.

We can't ignore the bearish marubozu candlestick pattern on the daily time frame. This candle confirms the strong bearish bias on the part of investors. But in the meantime, the pair has formed a spinning top candle on the 4-hour chart, which is also supporting a slight retracement in the pair.

Lastly, I highly recommend that investors closely monitor the Unemployment Claims & Philly Fed Manufacturing Index, which the United States is set to release today. Moreover, considering the unpredictability of the market, most investors are likely to catch retracements rather than trends today.  Before summing up, let me refer you to our latest articles on GBP/USD, EUR/USD, USD/JPY and Gold which explain all the tricks for how to use these instruments in ways that will help improve your trading.

Has the USD Reached A Top?
22 hours ago