Last week was quite hectic, with the Buck giving up a big chunk of its value. That came mostly from the FBI-Comey-Trump situation, which I thought would blow over this week.

While this situation still boils in the US… this latest drama has already passed. So, as a result, this week was sort of boring as well. The economic data didn´t provide much action either, apart from the US GDP report on Friday. Keeping in mind that during winter the US economy slows down, we can say that it was a relatively good report.

That gave the Buck the boost it so badly needed, which was long overdue, but it wasn’t enough to change the overall trend. This week, the USD has traded sideways, so we can say that the downtrend has at least stalled for the moment.

This sort of trading environment was easy to trade, to be honest, and all our forex signals closed in profit apart from one. 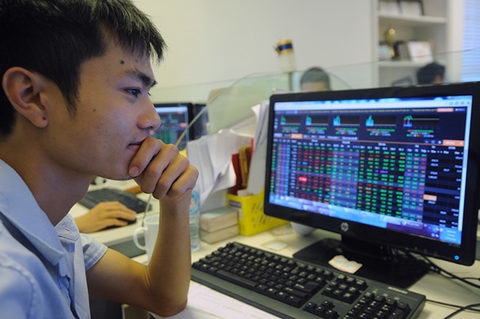 Sometimes sitting back and relaxing is a better way to trade

This week the forex market was a lot more quiet and predictable than the last, so we had an easy time trading. The tops and bottoms were in place this week and they worked quite well. The top in GBP/USD came around 1.3050 on Monday but slowly shifted lower.

Thus, we had a successful week with only one losing forex signal, for a total profit of 119 pips. We opened nine signals in total this week, and eight closed in profit (a couple of them manually, actually).

At 89:11, the win/loss ratio was also pretty good this week. So, another profitable week as we head towards the end of the month, but we still have three more days to go and we will try to increase our profit for May further.

Last week the volatility was pretty intense and the Buck lost a lot of ground against almost all major currencies. This week started off in the same manner, with EUR/USD giving it another push higher and breaking above last week´s high on Monday.

But that was it… the waters calmed and all forex pairs traded in ranges the entire week. The FBI-Comey drama that panicked the market last week lost its appeal and the economic data was light, so there was no incentive for forex majors to take big decisions and large moves.

As we mentioned before, it was a bit boring – even though boring is good in forex. If trading gets too exciting, then there´s something wrong and you must take a step back to see the bigger picture. So, if forex gets boring for you  – remember that it´s a good thing because it means that you´ve mastered this game.

This week we also received the minutes from the last FED meeting and they were hawkish in my opinion. However, the market was expecting some details on how they are going to tighten their monetary policy, which hit the Buck but it was short-lived. The Buck reversed the losses after the positive US GDP reading on Friday and ended up the week almost unchanged, so that was all for the week, no drama.

Monday was quiet regarding the economic data, while Tuesday we received some positive numbers from Europe, yet again. The services and manufacturing PMI beat expectations and the business climate also improved further.

We can´t say the same about the UK economy, though; prelim business investment picked up but the GDP declined and it missed expectations as well. It´s the same theme we have been seeing in the UK since last autumn, the data strongly deviates both ways and Brexit gets the blame.

On Friday, the US durable goods orders declined, but the second GDP reading took all the attention when it came 0.5% higher than the first estimate, and this gave the Buck a deserved boost.

From the H4 EUR/USD chart, we see that last week the uptrend was really strong, but this week this forex pair has traded sideways most of the time, apart from the initial spike on Monday.

The range has been 100-120 pips and we made use of it a couple of times when we opened those forex signals here. Right now the price is sitting on the 50 SMA (yellow) which is providing support.

Stochastic is overbought as well, which is a sign that we might see another move higher on Monday, probably to the top of the range. 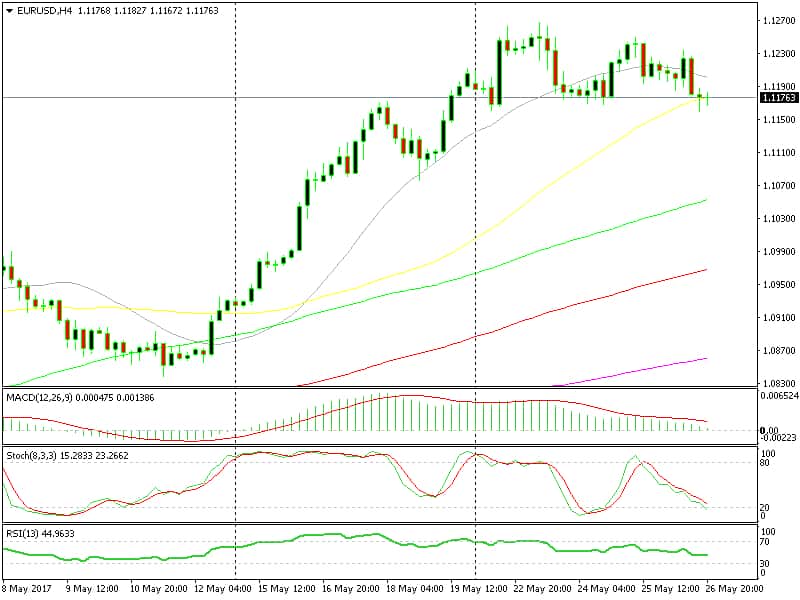 The 50 SMA is holding this pair at the moment

Although, the weekly chart is painting a different picture. Both technical indicators are overbought and the weekly candlestick closed as an upside-down hammer, which signals a possible trend reversal. If not a trend reversal, then a retrace might be on the way and it is long overdue as well, so let´s hope it happens since we have an open long-term signal in this pair. 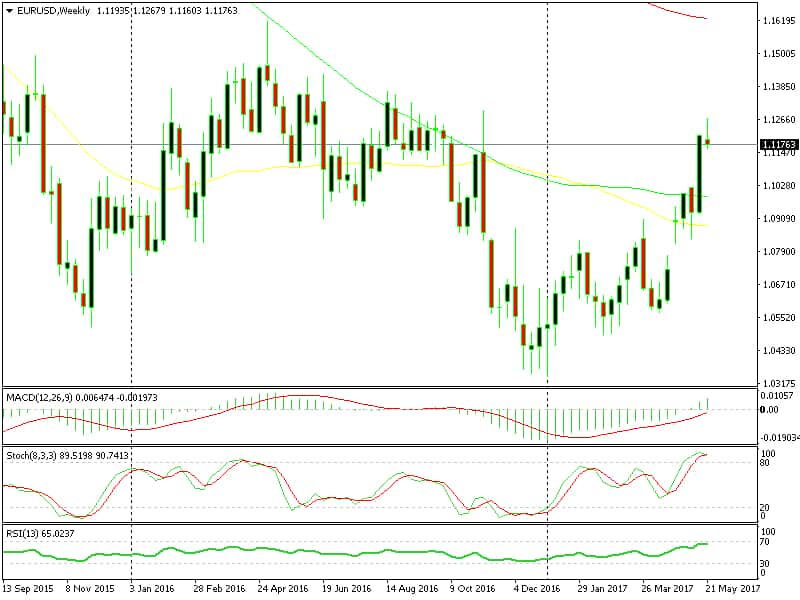 The weekly chart is oversold

Another profitable week for us, which makes it the third one for May, so we´re heading toward the end of the month with quite a few pips in our account.

Next week, on Monday the ECB (European Central Bank) President Mario Draghi will talk about the monetary and economic affairs in Brussels, so hopefully, he will talk the Euro down and start a pullback in EUR/USD that is long overdue.

The Retreat in USD/CAD Seems to Be Over, Despite Better Canadian GDP
11 hours ago