The global financial markets were mostly quiet as the world's two biggest economies, the United States and China were closed on the first day of a new week. The trading volume, volatility, and liquidity remained moderate. This market behavior was expected as we reported in our earlier report WTI Crude Oil Completes 61.8% Retracement.

We can understand the emptiness of the market by the fact that even the launch of another ballistic missile test by North Korea failed to trigger the demand for haven assets. It's the 9th missile test this year and the recent one was performed right after the G7 meeting where countries pledged to exert more pressure on North Korea to stop them from launching more tests. Anyhow, the impact of this news is likely to be "priced in" during the early Asian sessions.

Yesterday, the most awaited event was ECB President Mario Draghi's speech. He weakened the single currency by saying that inflation in the Eurozone remains soft and ECB still requires ample stimulus to underpin the subdued inflation.

By this, Mario Draghi tempered the expectations for a hawkish policy ahead of the upcoming meeting, which is on June 8th. Since the rate hike sentiment is dumped now, any change in the ECB's tone will surely cause huge fluctuations. 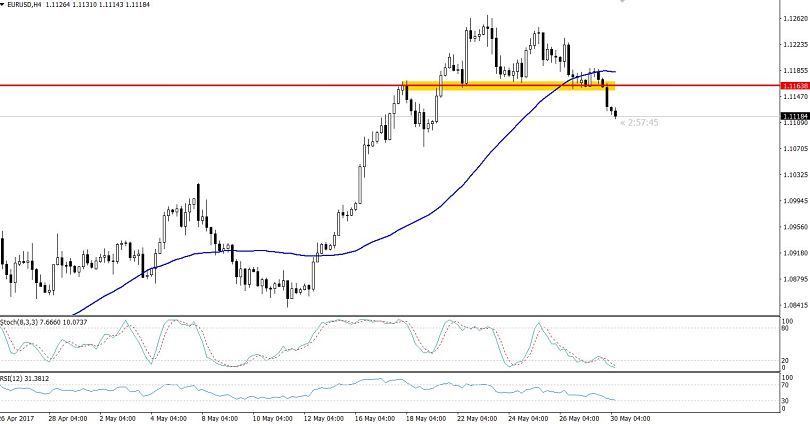 On the 4- hour chart, the EUR/USD has finally broken below a significant support level of $1.1160, the same trading level we suggested monitoring in the previous report.

For now, the pair has entered the oversold zone, since both of the momentum indicators, RSI and Stochastic are trading below 30 and 20 respectively.

USD/JPY – Break Out Of An Ascending Triangle

The Safe Haven Yen had a little reaction after the North Korea fired a short-range ballistic missile early on Monday. However, the reaction was muted as the U.S. and Chinese markets were closed.

However, today in the Asian market session, the USD/JPY broke below $111.200 as the investors placed their investments in the haven assets. In addition, we can't ignore the gain in Japanese inflation, which has formed the sentiment that the Bank of Japan (BOJ) is getting closer to achieving its inflation goals. Thereby, they are likely to keep their interest rates on hold which will strengthen the Japanese Yen. 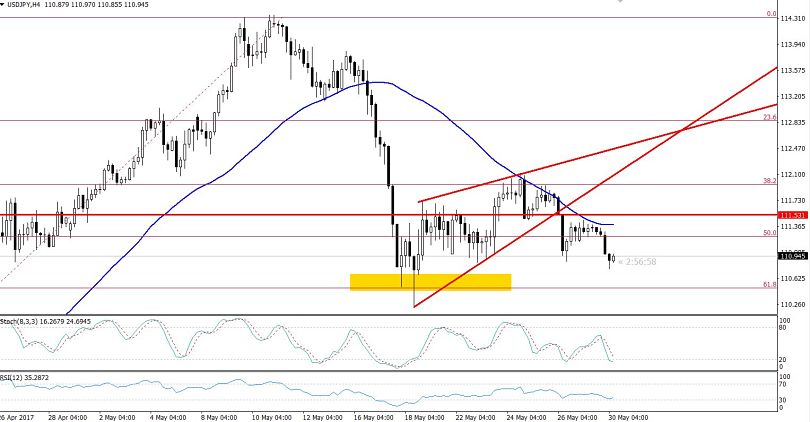 On the daily chart, an ascending trend line is extending a strong support to USD/JPY above $110.850. In addition, we can also see the double bottom pattern exactly around the same trading zone of $110.750/850, which suggests a bullish sentiment in the pair.

The momentum indicators are also trading around oversold zone, supporting the argument that sellers are likely to get exhausted and we may encounter buyers for a short time period.

Unlike yesterday, the global financial markets are likely to exhibit volatile behavior upon re-opening of the banks after the public holiday. Hence, ongoing political tensions, including between the U.S. and North Korea, will need to be monitored before making any order in the market.