Commodity currencies have been enjoying some good times recently, over the last 2-3 weeks. So, normally, we have kept a bullish bias towards the Com Dolls.

The Canadian Dollar has been leading the way, gaining about 400 pips against the Buck, while NZD/USD also completed an impressive 300 pip climb.

We´ve had a few buy forex signals during this time, particularly in NZD/USD, which have closed in profit, so we made use of this uptrend to some extent.

The Aussie, on the other hand, has been lagging; the climb in this forex pair has been around 200 pips and unlike other commodity currencies, the climb in AUD/USD ended last week.

But we remained neutral on this forex pair, until today. Early this morning, the Australian private capital expenditure and retail sales were posted and they were quite upbeat, yet the Aussie lost about 70 pips after an initial spike higher.

This is a clear sign that the bulls have given up on the Aussie and the sellers are trying to find reasons to sell. So, we´re turning bearish on this forex pair. 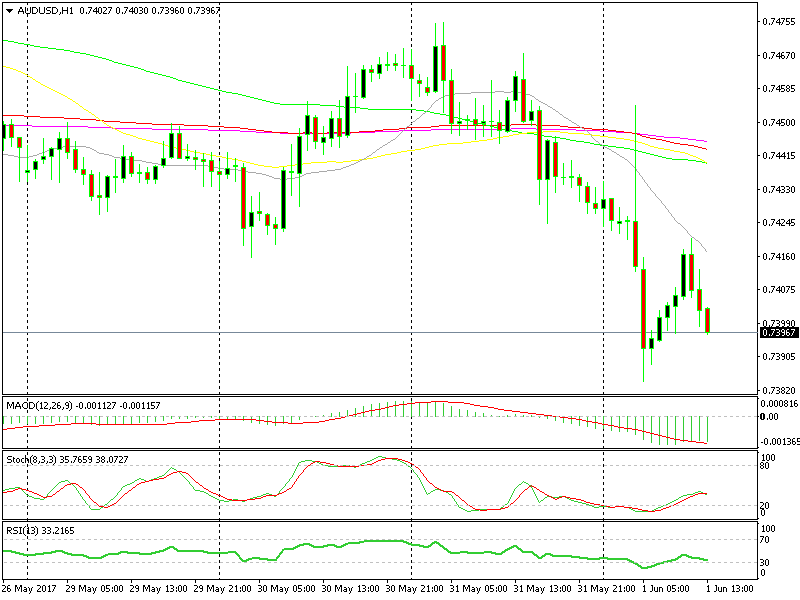 We will look for opportunities to sell. We missed such an opportunity a few hours ago when the price retraced higher but ran into the 20 SMA (grey) which ended the pullback. Although, we´re still looking to sell the retraces on the H1 forex chart.