We got used to trading politics in the last several months, so the volatility this month wasn´t that unexpected for us. Most major forex pairs put up a hell of a show in May, with EUR/USD ending about five cents higher, while USD/JPY surged 400 pips in the first half of the month, only to end up 500 pips lower by the end of it.

We ended up with a hefty profit nonetheless, which shows that our trading strategy is proving to be immune from these sorts of markets. So, we will keep employing these strategies, although we will try to increase the number of long-term forex signals in order to make the most of these moves.

The driving force for the markets this month was more of a mixture of politics and market sentiment, which made it even more difficult… however we still floated above the waves.

The month kicked off with negative sentiment surrounding the USD in the first week, despite rate hike probabilities for June jumping close to 100%. Macron won the French elections on the second week and this calmed the markets for a short time.

The next political drama surfaced in the US and the currency suffered the consequences, obviously. So, one thing we can say for sure this month is that the Buck is not very popular in the forex market at the moment. 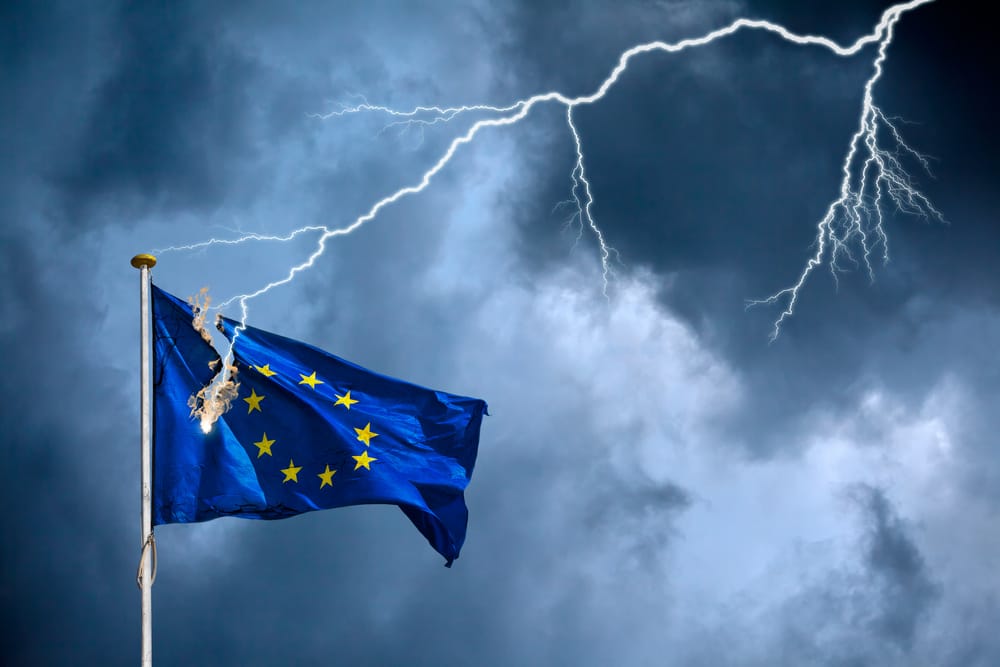 Finally, thunderstorms are over in Europe, from the inside at least

Market sentiment usually moves the market unexpectedly and it is hard to read, particularly when it is not supported by fundamentals. So, we had a tough time in the first week, but the loss was only 25 pips.

It wasn´t difficult for us to make up for the losses of the first week since the volatility decreased and most pairs traded in ranges, with clear tops and bottoms in place. We ended up with a 139 pip profit in the second week, so we got back on track.

The third week was quite crazy. Following the political tensions in the US, the majors sent the USD tumbling 400-500 pips lower, but we managed to stay afloat and made 40 pips.

The market needed another break from the turmoil, so in the fourth week, we saw mostly consolidation in the major pairs. The ranges are always easier to play and we made the most of it, ending the month on the right foot with a 309 pip profit in total.

This month kicked off with the British PM Theresa May threatening to walk out UK/EU talks without a deal. That´s irresponsible, in my opinion, and it might have played a role in the negative market sentiment during the first week. This negative translates into a broad USD selloff – and that´s exactly what happened.

Macron won the French elections on the first Sunday of the month which relaxed some nerves, so the second week was pretty relaxing and most forex majors traded sideways.

The third week was the most exciting but the toughest one as well to trade. The Russians involvement in US politics with the fake media (strangely enough Trump always benefits from it) set the financial markets in panic and again, the USD suffered, this time around 400-500 pips.

The fourth week was sort of quiet; the major event was the FOMC minutes which didn´t do much to help the Buck. So, the USD ended up in the worst place possible. Trump and the Germans were consistently complaining about a weak Euro and making things worse, but this are the driving forces in the forex market now and we have to adapt to them.

The first week of May was mainly about the UK. The economic data from the Island was surprisingly good. All three major data pieces, construction, manufacturing, and services jumped higher, beating expectations by a nice margin.

The impressive numbers from the UK kept coming, with the UK unemployment rate falling to 4.6% and CPI (inflation) also beating expectations.

So, it´s been a pretty good week regarding economic data from the UK, but we can´t say the same for the US.

The US inflation report missed expectations while retail sales were disappointing. That wasn´t all, though, durable goods orders declined from the previous month, but at least the Q1 GDP beat expectations by 0.5%. Regarding Europe, well, it´s been pretty much the same, with most of the economic data releases reaching above consensus.

The daily USD/JPY chart is all over the place and doesn´t paint a clear picture, so we have to look at higher timeframe charts in order to see the overall bias. 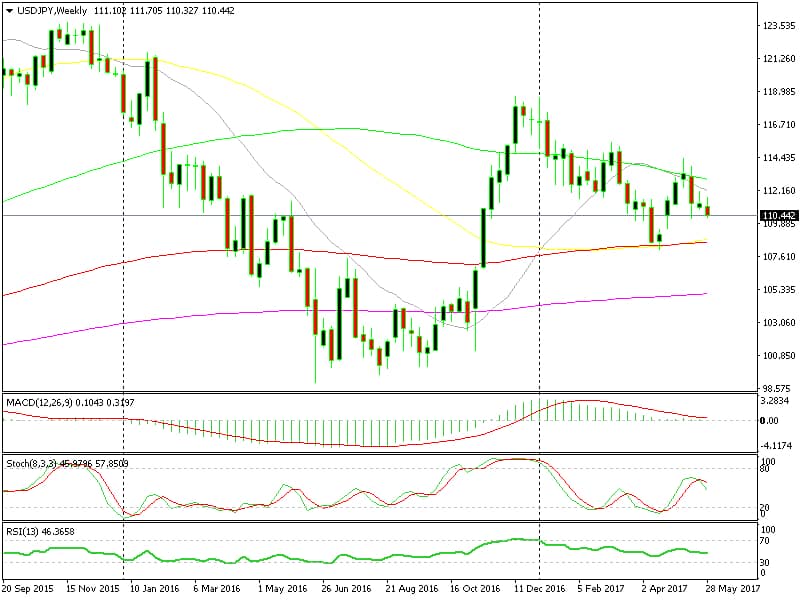 The weekly chart seems to be headed down

Looking at the weekly chart, we can see that it was almost overbought a few weeks ago, but the price failed to break above the 100 SMA (green) and the next week it turned around. Now, this forex pair is headed down and it looks like it´s aiming for the 108.

Although, the sellers still have to take out the 110 support level and the two moving averages which stand at 108.60. 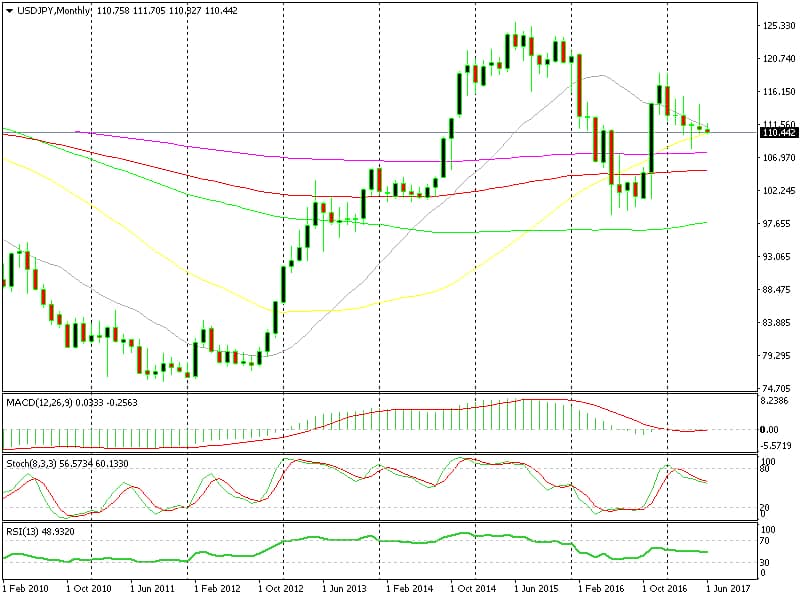 The monthly chart looks bearish, too

The monthly forex chart also looks pretty bearish. The price climbed above 114 in May, but eventually, it lost all the gains and the monthly candlestick closed as an upside down pin, which is a dovish signal.

In this chart, the 108 level doesn´t look that far away; it stands just above the 200 SMA (purple), so it´s reachable, but the 50 SMA (yellow) has to be broken in order to continue further down.

We sailed through another month and ended up with a considerable 309 pip profit. Volatility made things tough but we won in three out of four weeks. Macron won the French elections in May, which means one less risk factor for us to trade, however, there´s more to come in June.

The UK general elections will be held in the second weekend of June, but no one expects any surprises because Prime Minister May has a healthy lead in the polls.

Everyone is expecting the FED to hike interest rates on their June meeting, but don´t rule out any surprises, and keep in touch for live analysis and market explanations. By the way, we´re introducing cryptocurrencies soon guys, so those of you who like volatility will have more instruments to trade, besides gold and some forex nut heads.

Check out our free forex signals
Follow the top economic events on FX Leaders economic calendar
Trade better, discover more Forex Trading Strategies
Related Articles
Getting Long on the USD, As FED's Bostic Mentions 75 and 50 bps Hikes
The FED is preparing markets for further strong rate hikes, which has been helping the USD but today we are seeing a strong retrace low
4 hours ago