This was supposed to be an ordinary week, with the market confident about what was about to come. Everyone had already figured out the unknowns before the week even started.

The two biggest events this week were the ECB (European Central Bank) meeting and the UK general elections; as we said, the market had both events figured out. The ECB was supposed to keep interest rates unchanged and the UK conservatives were supposed to increase their seats in the Parliament.

The ECB kept the rates unchanged indeed, but they lowered inflation forecasts, which makes the monetary tightening process a lengthy process, while the market was expecting a shift now, at least in the rhetoric.

Everyone was expecting the Tories to snatch a clear win in the UK, but election surprises have been growing recently and this was a big surprise, particularly for PM May and her confidence. Instead of gaining, the Tories gave up some seats – and they almost lost actually – so the Pound ended the week on the wrong foot. 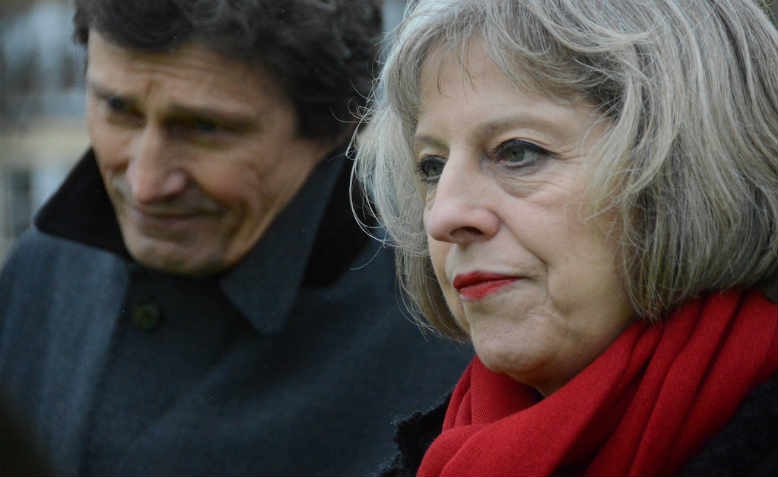 If you can recall from a few weeks ago, I was trying to pick a top in GBP/USD around 1.30, but that resistance area was broke and with UK general elections coming in, I threw in the towel.

On Friday morning, the price slipped 40 pips lower from the top. It´s a shame we didn’t get some pips from the action in GBP/USD on Thursday night, but who knew Theresa May would almost lose?

This week, EUR/USD traded in a slight downtrend after following a strong uptrend for several weeks. We could have made more of this small downtrend, but at least we got some pips from our sell forex signal here.

The 110.00-30 support-turned-resistance area in USD/JPY also provided us with some good trading opportunities. The 50 SMA on the H4 forex chart was also hanging around these levels, so it added extra strength. We had two winning forex signals in this pair, but the resistance level finally had to let go on Friday.

But, overall, we finished green on this forex pair. Although we can´t say the same for the overall performance of our signals this week, as we finished 49 pips down, but this is the first week of the month, so I´m sure we will end up well in profit by the end of the month.

So, forex traders knew what was coming this week and they were pretty confident on the outcome. Although, there was a feeling of caution in the market which is visible in JPY pairs, as it is a safe haven currency. USD/JPY broke the 110 support level on Tuesday and then dived to 109.11.

As the week progressed, the market received yet another lesson that you must never make assumptions in this game and trade what´s in front of you.

The ECB kept the monetary policy unchanged as expected, while slightly hiking the inflation outlook and increasing growth forecasts.

Lower inflation forecasts mean that the ECB will have to keep its monetary policy loose, or at least be very slow with rate hikes… and this should spell trouble for the Euro.

But, higher growth means more to the actual economy than just inflation, so the market seems to be going with economic growth (GDP) – which has been reflected in the Euro, hence the buying pressure in EUR/USD during the past several months.

Although, the biggest event this month was the general elections in the UK. Theresa May decided to imitate David Cameron by shooting herself in the foot. These elections were supposed to give her a bigger majority in the parliament, so she could be in a stronger position to negotiate with the EU.

But I suppose the Brits didn’t like her arrogant attitude towards this process. Many Brexit voters thought that it would be a soft landing, but May has pushed harder for a hard Brexit since she was granted the chair of the Prime Minister last year.

So, she asked the people for more power and she was turned down. The political landscape in the UK is still not clear and the Labour leader Corbyn could still snatch the position as I speak, although chances are that May will remain in the chair.

It will be interesting to see if Theresa May has realised that the British don´t want a hard Brexit, but I doubt it.

This is all negative for the Pound since it will weaken her position in the UK and in relation to the EU. So, we should see GBP resume the bigger downtrend in the coming days.

This was a mixed week for economic data in Australia. The Australian GDP beat expectations and company operating profits jumped higher. But, the current account and trade balance shrank from the previous months.

We can´t say the same thing about the economic figures from the UK, though. Manufacturing, industrial production, and services PMI all missed badly this week, so with the unstable political landscape and the situation doesn´t look so great for the GBP.

We saw some green numbers from Europe this week, again. Revised GDP for Q1 ticked up a point higher, while Sentinex investor confidence and industrial production increased.

GBP/USD has been trading in an uptrend since the start of the year, although the monthly forex chart shows that the bigger trend is clearly down and the climb during this time is more of a pullback. 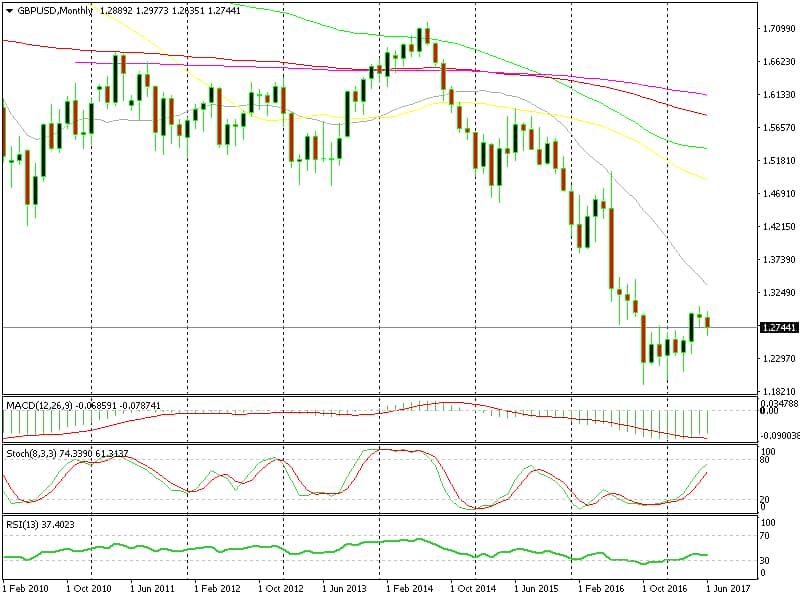 Last month´s candlestick closed as a doji which is a reversal pattern. This month has already started with a bearish momentum, so the monthly chart is pointing down. 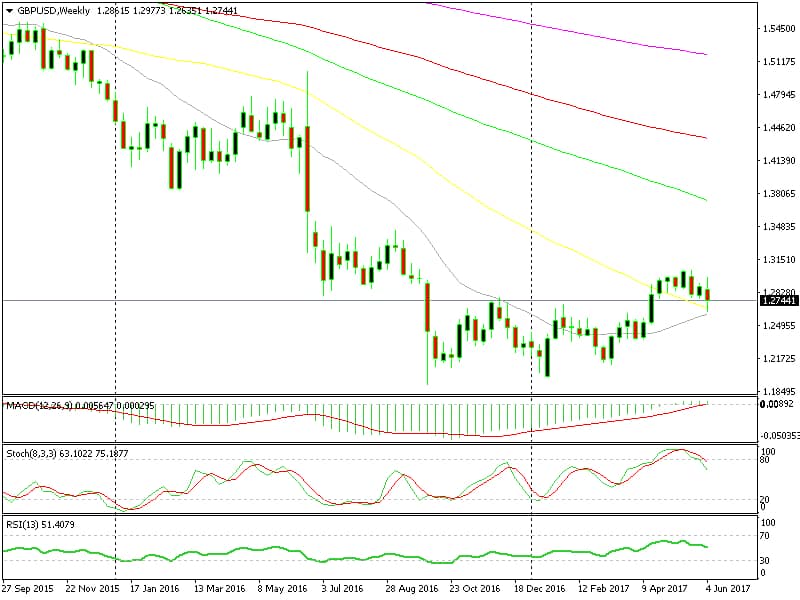 The weekly chart looks a bit mixed, since it was overbought a few weeks ago and it´s now headed down, although the 20 SMA (grey) and 50 SMA (yellow) are standing in the way. They provided support on the way down on Friday, so the price will have to break these two moving averages if the move down is to extend further. 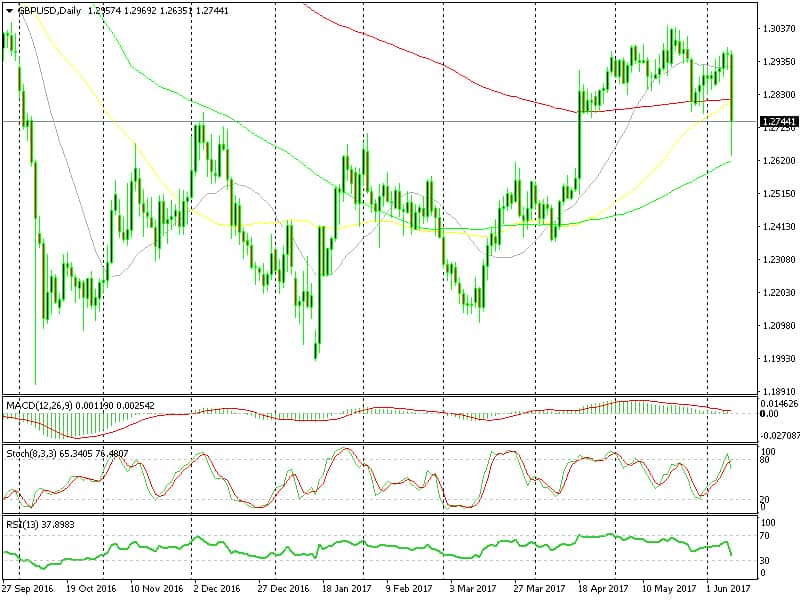 The daily forex chart is also pointing down, but the 100 SMA (green) is providing support here as well. It will depend on how UK politics develop in the coming days, but I have a bearish bias at the moment for this pair.

Theresa May took her gamble this week and she lost. She should have seen it coming with the hard line she has taken on Brexit, but power and arrogance doesn't lead to reason. After all, we have seen a lot of nonsense from politics in the English-speaking parts of the world.

GBP is resuming its long-term downtrend but as I said, we will have to follow British politics in the following few days/weeks to see if we can get a good entry price for a long-term sell forex signal.