BOC Turns Hawkish – Is This The Start Of Another Downward Move? - Forex News by FX Leaders

BOC Turns Hawkish – Is This The Start Of Another Downward Move?

I just checked the forex charts for the last time before heading to bed and I noticed that USD/CAD had dived nearly 150 pips. I instinctively thought that the move was related to oil. However, it wasn’t due to oil prices, which is strange because it´s been a long time since we saw the Canadian Dollar make a major move other than on oil.

So I had a look around and saw that Miss Wilkins from the Bank of Canada (BOC) was on a presser. You didn´t have to hear her comments to understand what she said. Her comments were hawkish, of course, which was surprising.

The BOC has been ignoring the better economic conditions, which we pointed out a couple of times last month. But now they seem to be turning bullish all of a sudden.

What were the comments, though?

The comment, which attracted most of the attention and caused most of the damage to USD/CAD, was the one where she mentioned that “the BOC will assess whether all the stimulus in place is needed”.

She also said that economic growth in the first quarter was impressive and that most industries are expanding. Although, BOC also acknowledges the uncertainty coming from their southern neighbor puts the Canadian economy at risk. 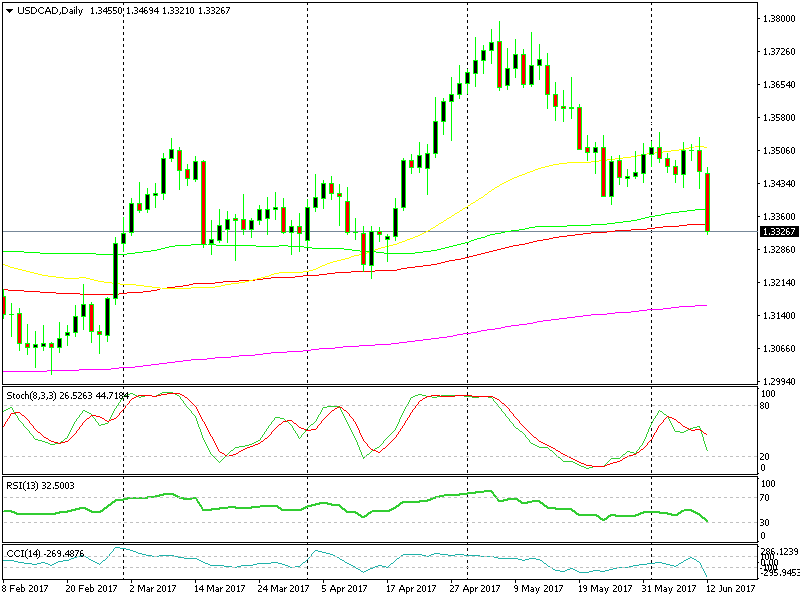 We moved below 2 moving averages today

That was obviously more than enough to send this forex pair diving 150 pips lower. In May we saw USD/CAD lose 4 cents top to bottom, so is this the next leg down?

We saw a retracement take place over the last two weeks. This was limited by the 50 SMA (yellow), so the pullback is over. This logically leads to the 2nd downward move. So, right now this forex pair looks very bearish both technically and fundamentally.