The global financial market is trading quite calmly, with no major changes in the technical and fundamental outlooks. Similarly, the greenback is trading within its pre-weekend trading range compared to peer currencies. The Gold Prices are consolidating below in a narrow range of $1262 – $1267, as the investors await the central bank meeting. The meeting is likely to start in the middle of the week.

I'm referring to the Federal Reserve (FED), Bank of England (BOE) and the Bank of Japan (BOJ) which are in focus this week. However, as recommended in the earlier update, Forex Signals Brief For June 12th – 18th, only the US central bank is assumed to hike the interest rates. Aside from the Fed Fund Rate, investors' focus will be looking for any fresh clues about the upcoming plans regarding tightening the Fed monetary policy.

Though we aren't expecting any change in the BOE (Bank of England) policy, investors are advised to monitor their MPC Official Bank Rate Votes. Any change in the figure is likely to give an additional push to the pound. We will have a lot more to discuss on this tomorrow and the day after tomorrow (on the day of release). For now, let's take a look at the top economic events to watch today.

On Monday, the single currency Euro began to trade on the higher side against the Buck, after the first round of French parliamentary elections on Sunday. The results demonstrated that President Emmanuel Macron’s party was set to grasp a tremendous majority in the France.

In consequence, the major currency pair EUR/USD underpinned initially but failed to hold on the higher side. This was due to the disastrous UK election results, not only for the British Prime Minister, Theresa May, but also for the British Pound. 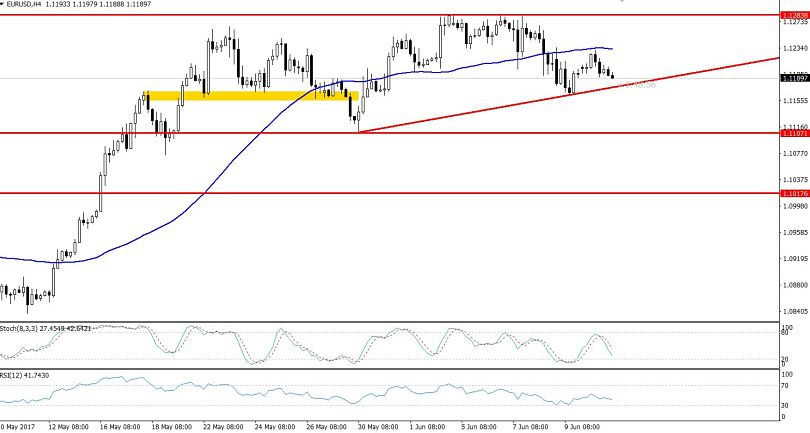 On the 4-hour chart, the EUR/USD has stuck in a narrow trading range with a lower limit of $1.1165 and an upper limit of $1.1280. Honestly, the technical outlook doesn't have much to offer us at this point, as the market is consolidating with no clear trend in anticipation of the central banks' decisions ahead.

The major resistance is found at $1.1285, the double top level whereas, the major support can be found at $1.1160. In addition, the EUR/USD is holding below 50-periods EMA along with the momentum indicators, which is demonstrating investors' selling bias. The RSI and Stochastic, are both holding in the selling region, supporting investors' bearish sentiments.

The sterling continues to head lower against the US dollar for the fourth consecutive trading day. In this time span, the pair has dropped more than 300 pips because of the UK parliamentary elections results.

Yet, the bias for the GBP/USD remains on the downside, as the election results pointed that May’s call for the snap election backfired. She had intended to strengthen her position ahead of the Brexit negotiations, which are likely to begin later this month. However, the elections generated disastrous outcomes, not only for the British Prime Minister Theresa May but also for the British Pound.

At the moment, traders are waiting for the policy meeting from both major economies, the United States and the United Kingdom.

At this point, the GBP/USD is in between the upper and the lower trading level. So it seems inappropriate to enter the market now. Thus, I'm looking at the area below $1.2635, in order to catch a sell position up to $1.2585. 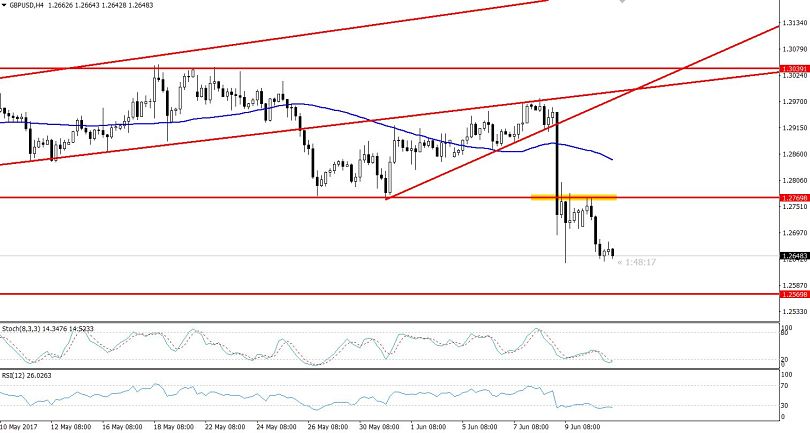 The RSI below 30 and the Stochastic below 20 are representing that the pair is held in the oversold territory. In this scenario, we may observe a weakness in the selling pressure and a slight bullish retracement in the pair ahead of any latest fundamentals.

The financial markets are likely to trade calmly in the absence of any major macroeconomic events. Once confirmed, the Fed Rate Hike sentiment is likely to rule the market. Investors are likely to stay away from the market before the big events tomorrow. Keep checking for further updates and forex trading signals!