Over the past 6-7 months, the British economy has experienced many ups and downs. We have seen construction, services, manufacturing and industrial production figures jump one month and shrink the next month.

Inflation figures are another story though. The CPI (consumer price index) has been increasing over the last six months nonstop, while other developed economies are currently going through a stagnant period.

The increase in oil prices late last year boosted global inflation. In the last few months though, oil prices have stalled along with inflation in most developed countries.

In Britain though, inflation continues to run hot. It´s been holding above expectations for quite some time and the yearly number increased to 2.9%. This number is above any central bank target. The inflation target is usually 2%, which means that at nearly 3%, the BOE (Bank of England) should have been hiking interest rates since March.

But we know that the situation is different in the UK, Brexit and politics are driving GBP pairs for about a year. Besides that, growth has been slow, so the BOE is stuck between a rock and a hard place.

As we mentioned in the GBP update yesterday, the political scene in the UK became very unstable after last week´s snap elections. As a result, we´re keeping a bearish view on this forex pair, despite the jump in inflation. 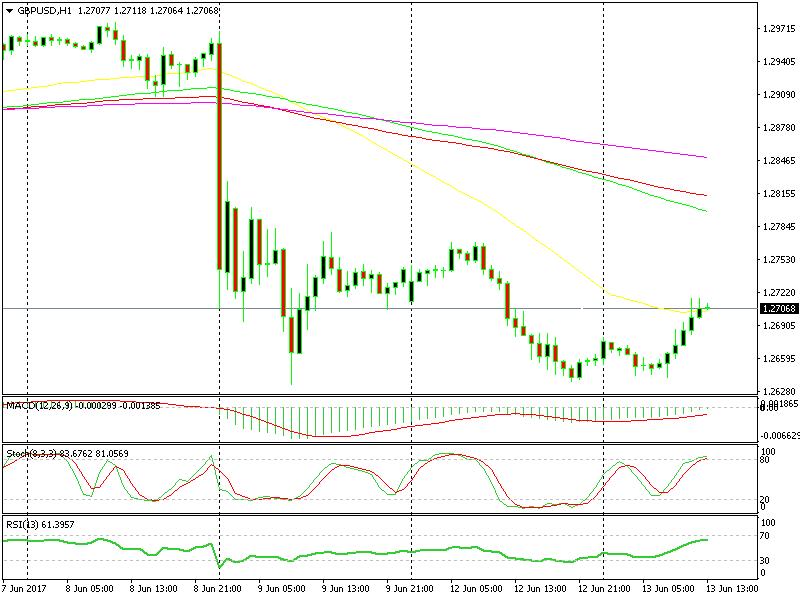 The H1 chart is overbought

We´re looking to sell this pair. The 50 SMA (yellow) on the H1 forex chart is providing resistance, so we might actually sell around here. The hourly chart is overbought and the price is having trouble breaking above the 50 SMA, so I think that opening a sell forex signal here would be sensible.