This was supposed to be another straightforward week, where the market had everything figured out and the BOE (Bank of England) and FED meetings were supposed to go by without much drama.

However, the BOE is stuck between a rock and a hard place so they can´t move an inch, while the FED was hiking rates, so if anything, the market was expecting a dovish statement to go alongside these moves.

The surprises started before these two major forex events –  inflation in the UK jumped to nearly 3% while earnings fell. On the other hand, inflation declined in the US.

Well, the FED minutes came out hawkish after increasing interest rates for the second time this year, and the BOE is turning hawkish. That was a surprise, however, I still think the Pound is going down. So GBP bulls, don´t get too excited! 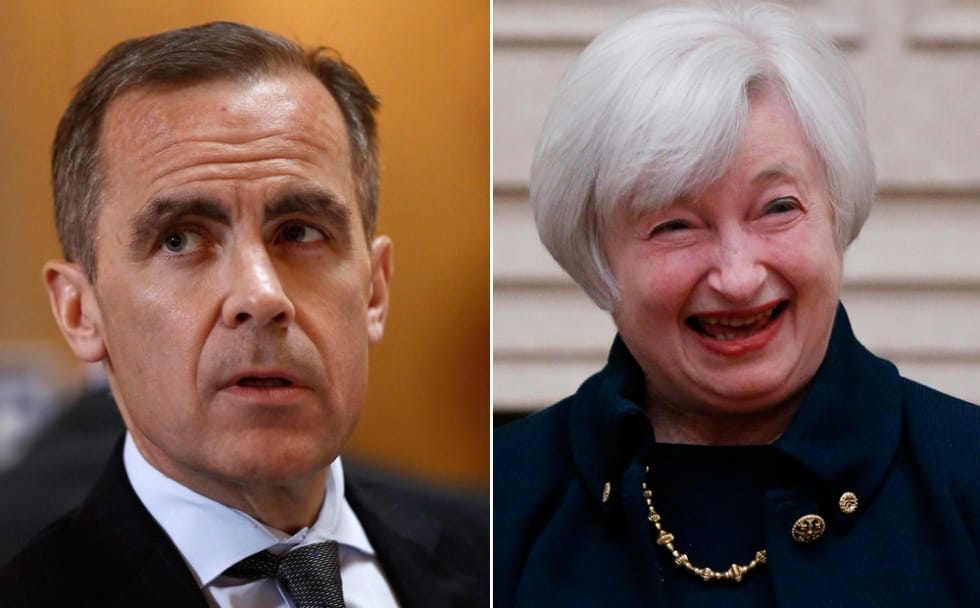 Guess who will be the one to hike interest rates next?

Most forex traders didn’t expect much from the FED and BOE this week, particularly after the negative economic data from both countries earlier on. But, both central banks turned hawkish and increased uncertainty, so we quite the negative week in forex.

We started on the right foot with a couple of winning forex signals in AUD/USD. But as the week progressed and uncertainty increased, we had a difficult time. It was hard to predict the moves because by the end of the week the USD was gaining against most forex majors.

So we decided to play NZD/USD, but the commodity currencies took another sudden turn on Thursday afternoon and caught us off guard.

We did end the week with one winning forex signal in EUR/GBP, which we opened based on the 200 smooth moving average on the hourly forex chart. So, we ended up 110 pips down this week but, hopefully, we got back on the right track for next week.

Forex traders started the week all confident, as everyone knew what was coming. Two major central banks had their meetings scheduled for this week but nothing extraordinary was expected to happen.

Everyone knew the FED was going to hike interest rates for the second time this year after March, because rate hike probabilities were near 100%, and we didn´t expect a hawkish FOMC statement.

If you remember on Wednesday, US inflation and retail sales missed out by quite a lot, so expectations for a dovish FED later in the evening increased. But, the FOMC statement was hawkish, which came at the right time for the Buck.  So, rhetoric had more impact this time on the market. You can check out how central banks move the markets with their rhetoric more often than with their actions.

After weeks of heavy losses, the USD started gaining some momentum during the second half of the week. This might be the beginning of another upward wave for the USD, but it remains to be seen in the following days.

Surprisingly enough, the BOE was also hawkish. Yes, at nearly 3%, inflation looks a bit dangerous but the other sectors of the British economy are looking really soft as of late.

Average earnings missed terribly on Wednesday, while services and manufacturing also missed, yet, the BOE turned hawkish as well when McCafferty and Sounders joined votes with Forbes to hike the interest rates. Again, I don´t see any action from the BOE anytime soon so we remain bearish GBP/USD.

In the last few weeks, the economic numbers from the UK have taken a dive, but inflation jumped to 2.9% on Wednesday, so we thought maybe we´d see some change.

But, average earnings fell 3 points this time and the previous reading was revised down as well. That´s pretty bad, knowing that it will weigh on people´s pockets and it will be reflected in the retail sales numbers too.

For the US, no good news either. Retail sales declined by 0.3% on Wednesday and inflation dived one point as well. Besides that, building permits, housing starts, and consumer sentiment missed expectations as well on Friday. The only good news this week came from Australia where unemployment declined by 2 points.

On Wednesday, EUR/USD formed a very bearish candlestick formation. The price moved 100 pips higher after the disappointing US economic numbers, but then closed back down where it started the day, forming a doji on the daily forex chart, which is a reversing signal. 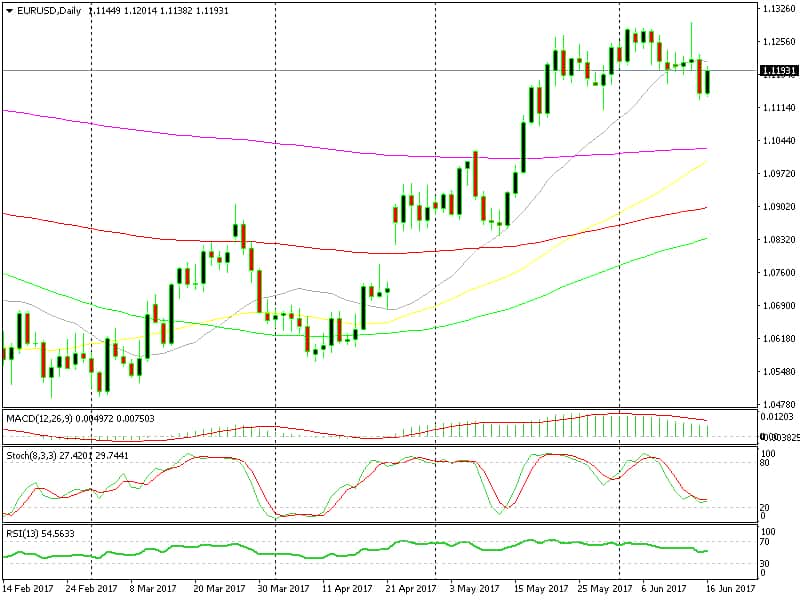 On Wednesday the price formed a doji

The next day was followed by another bearish candlestick, but the price climbed about 60 pips on Friday and ended the week at this spot. Although, it is engulfed by the previous candlestick so Friday looks more like a retracement than a reversal from the previous two days.

The retrace looks more visible on the H4 chart. If you look at it, you can see that stochastic is almost overbought and 2 moving averages are hanging about 20 pips above our head. So, by the time we reach them this chart will be oversold and probably resume the downtrend. 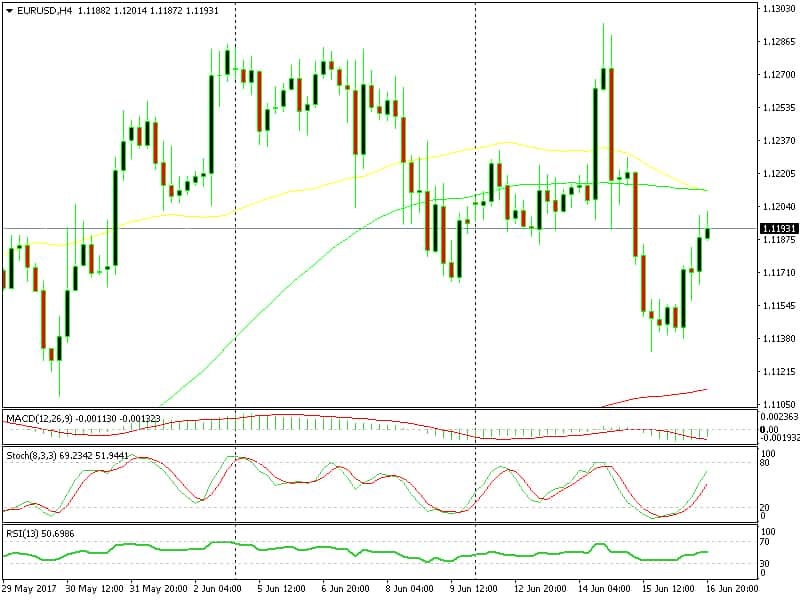 Will the retrace end where the 2 moving averages are?

We entered this week without expecting much, but the less-than-stellar economic data was followed by the central banks increasing the volatility in the market. BOE and the FED turned hawkish all of a sudden, which provided support for their respective currencies.

Although, I don´t expect the GBP to strengthen much further. We´ll get to hear what Carney has to say about this next Tuesday, though. There are quite a few other central bankers on the schedule next week too, so we´ll keep an eye out for them.

Check out our free forex signals
Follow the top economic events on FX Leaders economic calendar
Trade better, discover more Forex Trading Strategies
Related Articles
Getting Long on the USD, As FED's Bostic Mentions 75 and 50 bps Hikes
The FED is preparing markets for further strong rate hikes, which has been helping the USD but today we are seeing a strong retrace low
5 hours ago