GBP/USD Is Being Stubborn, But The 200 SMA Has Our Back - Forex News by FX Leaders

GBP/USD Is Being Stubborn, But The 200 SMA Has Our Back

Last Friday we opened a sell forex signal in GBP/USD. Fundamentally, the FED changed its outlook from neutral to hawkish which is USD positive, and consequently negative for GBP/SUD.

The BOE (Bank of England) turned slightly hawkish when the votes to hike interest rates increased from 1 to 3 which sent the pound nearly a cent higher.

Although, as I mentioned in the weekly review, the BOE won´t change its monetary policy anytime soon, so this move in GP will soon wear out.

The 100 SMA (red) was providing some solid resistance in the hourly forex chart when we opened this forex signal and the stochastic indicator was overbought.

But the 50 SMA (yellow) proved to be stronger as it has held the price during all this time and reversed all the dips. Today, buyers took this forex pair above the 100 SMA, but the 200 SMA (purple) on the hourly chart did a good job of discouraging the buyers.

As you can see, the price has turned down since it reached that moving average and the previous candlestick closed as a pin, which is a reversing signal. So, the downside looks more favourable right now.

Besides that, the 1.2780 level where we opened our forex signal, is a long term support/resistance level on the daily chart. The 100 SMA (red) is also holding around there, which will likely add additional strength. 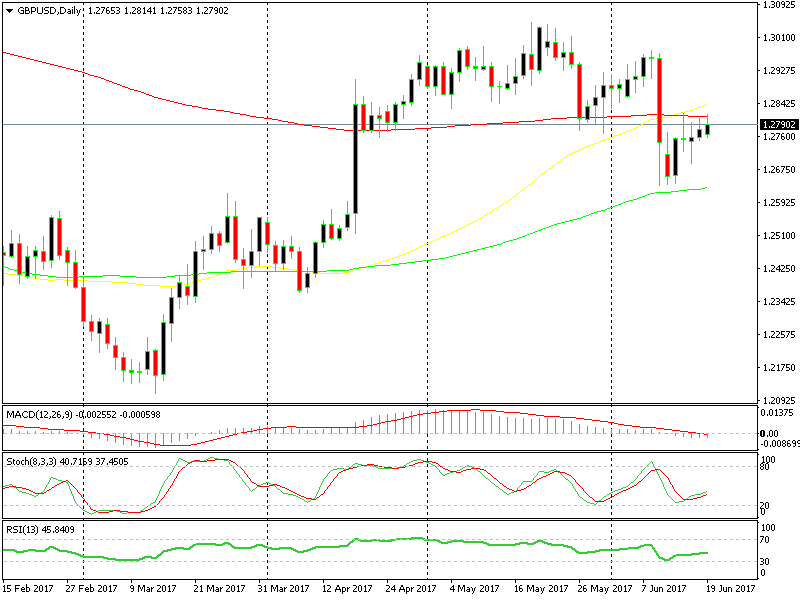 So, although this pair has been giving us a hard time today, at the moment it is heading in the right direction. The chart setup looks favorable for us, so fingers crossed.