Last Friday, the EUR/USD turned bullish after several days of decline. It continued higher today after the US durable goods order figures disappointed. At that time, it felt like the larger uptrend which started in January of this year was about to enter its next phase.

But, as I pointed out in the weekly review on Sunday, the 20 SMA (grey) had been acting as support & resistance previously, so it was likely to do the same now.

As you can see from the daily forex chart below, that moving average provided resistance today as well and now the picture looks much more bearish than last night when the forex market opened. 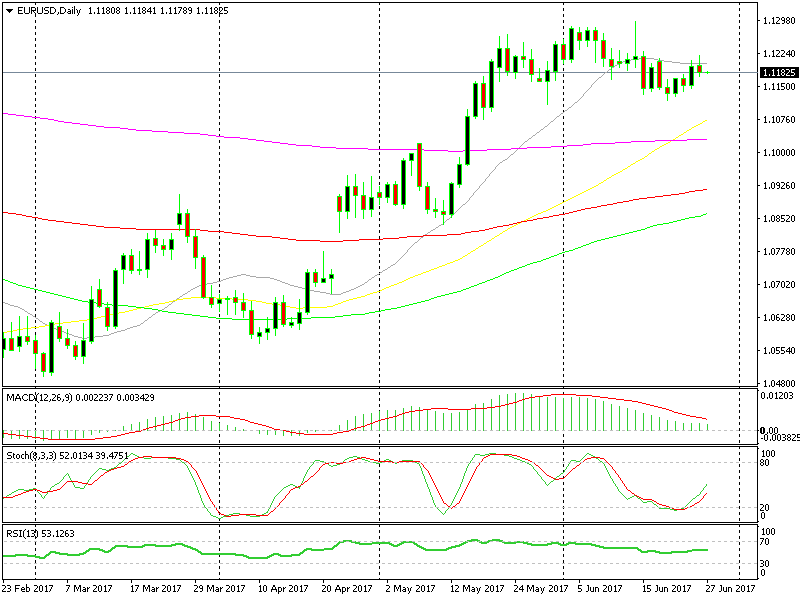 The 20 SMA is doing its job again

The daily candlestick looks pretty bearish since it closed as an inverted hammer. That means a reversal is coming after an uptrend, however weak it might be, such as the small uptrend of the last several days.

The reversal today was fundamental. ECB (European Central Bank) member Mario Draghi poured cold water on Euro bulls once again when he said that “interest rates have to be lower for growth to recover” and that “savers will see return on their savings in due time”.

What´s the due time, years maybe?

That is killing hopes for a rate hike soon and that can be seen from the technical picture in the EUR/USD chart. Unless we see a total turnaround from him tomorrow or some really crappy economic data from the US, I see this forex pair heading lower in the coming days.

I would have issued another long term sell signal here, but we already have one open and our company policy here is to keep risk/exposure low.

If you feel like it though, you can open a forex trade selling EUR/USD around 1.12 with a stop above 1.13 and 1.10 as the first take profit target.