In my opinion, the most important piece of economic data today is/was the UK employment and earnings report. Taking into account the weak numbers we have seen coming out of the UK lately, forex traders were eyeing the downside.

This is the lowest unemployment rate since the '70s. The earnings (wages) came out as expected, which was a relief after the terrible misses over the last several weeks.

In fact, the hourly chart setup looks pretty bearish, so we decided to fade this move. This means we just sold GBP/USD.

As we mentioned in the first forex update this morning, the 200 moving average (purple) on the H1 forex chart has been providing support over this week. It is likely to turn into resistance now that we´re coming at it from the bottom side.

It has been met by the 50 SMA (yellow), which is adding extra strength to that level. Furthermore, the last hourly candlestick closed as a doji which is a reversing signal according to candlestick formation textbooks. 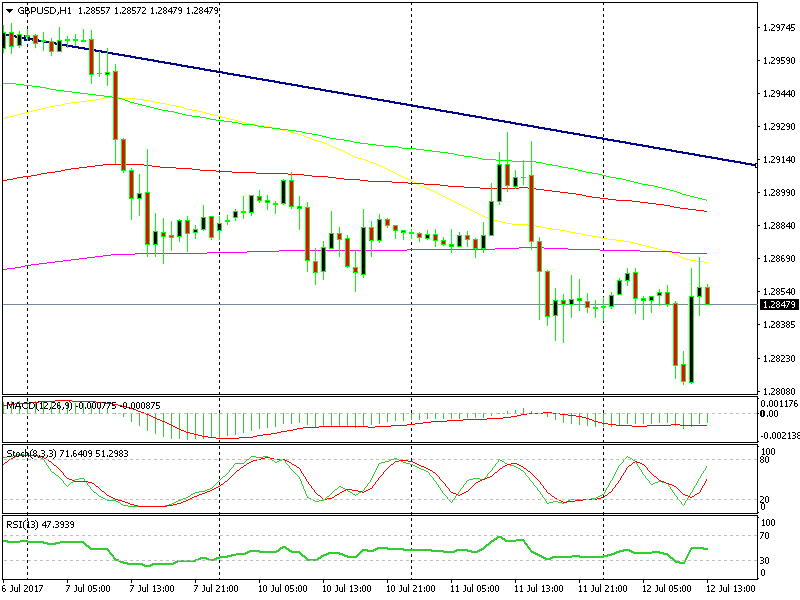 The 200 SMA is doing a good job providing resistance

That´s the third (or fourth) technical indicator pointing south and the trend is already down, so we decided to open a sell forex signal at 1.2857. As of now, this signal looks good, so let´s hope we get our pips soon.