The USB has received its share of beatings this year, apart from the Japanese Yen. This has run on too far for too long, despite representing the best-performing economy of the last several years.

So, in the last few weeks, we have seen some consolidation that forex traders were waiting for some direction.

We were waiting to get some answers from FED´s chairwoman Yellen since she had a testimonial in Washingtonon on her a two-day schedule. Perhaps a few hints about monetary policy here and there in the statement or during the Q&A sessions would be nice.

We received none of that, and the decision was left to the economic data. Only on Friday did we have our answer, when the US PI and retail sales disappointed.

The Canadians, on the other hand, turned out to be brave and take things into their own hands – ok it´s probably the second time. The BOC hiked interest rates, and they became the second major central bank to enter a monetary tightening cycle. 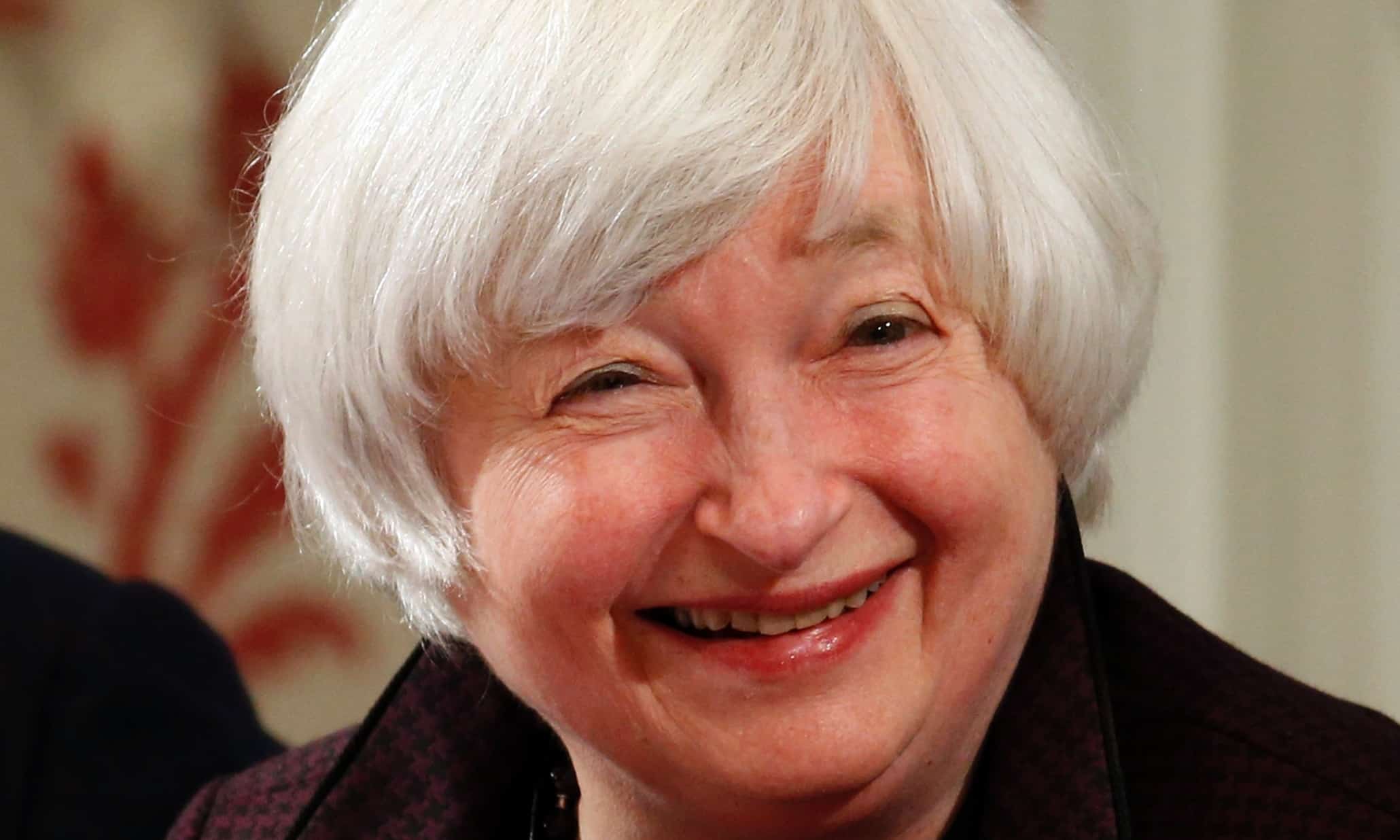 Last week, we had a good run with our forex signals and made a nice profit. We also left two short-term signals and one long-term open.

We opened the long-term signal in AUD/USD the previous week and by the end of last week, it was around 100 pips in profit. But as the week progressed, the USD entered a bearish phase and that forex signal turned around.

The Canadian Dollar has been heavily bid during this week, and this has had some impact on commodity dollars; hence the jump in AUD/USD from the climb on Friday which came from the disappointing US data.

I still see AUD/USD turning back down though and I´m thinking of opening another long-term sell signal in NZD/USD.

Anyway, the two short-term signals we left open from the previous week hit take profit on Monday morning. In total, we opened 10 forex signals this week, seven of which closed in profit, and a 51 pip profit overall.

We started this week off with one thing in mind, Janet Yellen´s two-day testimony. The minutes from the June FED meeting were confusing and FED members were divided regarding monetary policy.

So forex traders were waiting for Yellen to provide some clarity for the near term, because we know that in the mid-to-long term the FED has chosen its path, i.e. tightening the monetary policy by hiking rates and tapering QE stimulus.

But, at the end of the day, what we received from Yellen was uncertainty again. The markets were waiting for some hawkish comments, but the testimonial statement was sort of neutral, and the market missed out.

A neutral statement in a tightening cycle is obviously hawkish, but the market is more concerned in the short term. What the market missed in my opinion, is the fact that there were no dovish remarks, and it makes you think that the FED is just looking for a reason to hike the interest rates.

So, they left it all to the economic data and but data left them down. US CPI (consumer price index) and retail sales missed the expectations again and the USD ended the day on the retreat, although, as I mentioned in one of our market updates, all is not lost for the Buck.

Another forex event to remember from this week was the interest rate hike from the BOC (Bank of Canada). This was the first rate hike from them in a very long time; the last time was back in September 2010 from what I can remember. It was broadly anticipated, yet, the Canadian Dollar gained around 150 pips across the board.

This week was pretty light regarding economic data, at least until Friday. The only decent economic data in between was the British employment report on Wednesday.

If you look at the economic calendar, you can see that the UK section is all green, which means that it was a positive report, but that´s not exactly the case.

It´s true that unemployment declined by a point, but average weekly earnings (wages) lost three points. This is not displayed in red since the decline was anticipated. Nonetheless, that´s a huge decline for a single month and if you look at the trend, then the picture looks a lot grimmer.

The US PPI (producer price index) on Thursday was a mixed bag, with the headline number jumping a decimal point while the core number lost a point…so they balanced each other out.

US retail sales and CPI were what the market was more interested in and they missed badly, once again on Friday. CPI was flat while retail sales remained in negative territory.

After trading in an uptrend with minimal pullbacks for nearly a month, USD/JPY is finally making a decent retrace.

We couldn´t get in a month ago when the uptrend started and we lost that opportunity.  However, we´re planning to get in now, well, once this retrace lower is over. 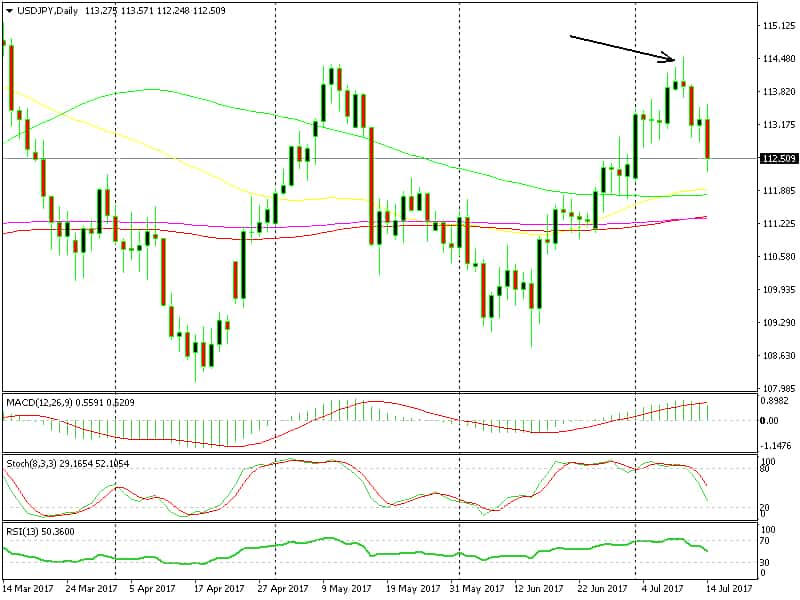 The retrace started after the daily candlestick formed a doji on Tuesday and now the price is headed lower, but stochastic is reaching the oversold area so the end of the retrace might not be that far away. 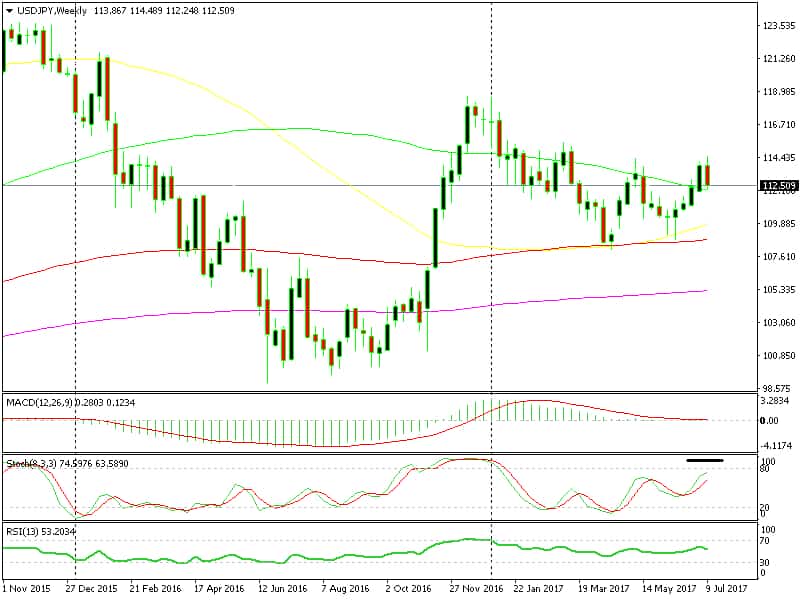 The 100 SMA is on the way, but stochastic is almost overbought

On the other hand, the 100 SMA (green) is providing support on the weekly chart, so that one has to go first before thinking of moving lower. I think this moving average will be broken next week and we´ll keep an eye when we are 50-60 pips lower.

We closed the second week of July in profit although it was a relatively quiet market. We´re entering the second half of July and the holiday season is beginning, so I expect a few quiet weeks ahead in forex.

Having said that, there are quite a few important economic data releases scheduled for next week, such as the Chinese GDP report, UK inflation, ECB monetary policy announcement and rate decision etc. So, we´ll have to be careful because we don´t know how the market might react to such data when liquidity is drying up.

Check out our free forex signals
Follow the top economic events on FX Leaders economic calendar
Trade better, discover more Forex Trading Strategies
Related Articles
Getting Long on the USD, As FED's Bostic Mentions 75 and 50 bps Hikes
The FED is preparing markets for further strong rate hikes, which has been helping the USD but today we are seeing a strong retrace low
5 hours ago