Gold Is Stuck Between 2 Moving Averages

Gold has been trading higher in the last couple of weeks amid USD weakness. Two days ago we pointed out that a few moving averages were standing on the way, which would provide resistance and make life difficult for Gold bulls.

Two of these moving averages (50 & 100 SMAs) have been broken and only the last one is holding the line now, that´s the 200 smooth moving average (purple). 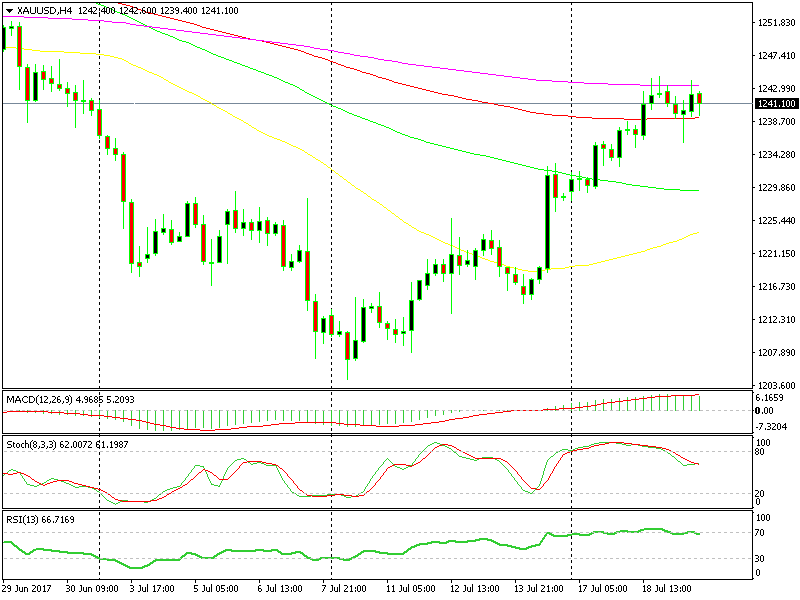 The price is stuck between 2 moving averages

Yesterday we issued a trade idea with the Gold update in the afternoon. The 200 SMA was providing solid resistance and the last candlestick were forming a bearish pattern.

I said back then that whether a reversal might be a tough job for Gold bears, a retrace was doable and a retrace in gold is usually counted in cents, not in pips. The retrace took place and it stretched more than 7 cents, so if you took that trade then you should have quite a balance in your forex account.

However, the price climbed back up, but once again, it couldn´t break the 200 SMA. Now the price is stuck in a tight range between the 100 SMA (red) and the 200 SMA.

This tight range is 4 cents wide, so there are plenty of good opportunities to make a big profit here. We know how to trade ranges, it´s pretty simple, sell at the top with a stop above the 200 SMA with a target near the bottom of the range and vice versa.