Forex Signals Midday Brief, July 21st – The USD Remains On The Decline, But EUR/USD Has Stalled

As the saying goes, there´s no rest for the wicked. The forex market has found reasons to dump the US Dollar session after session and that was the case today after the last big decline which took place yesterday.

So, the USD is turning into the “wicked” and politics is doing all that. It´s truly amazing to see the buck take such a beating during this year, when the US economy is the best performing among the large global economies.

Not only that, the FED has increased interest rates 3 times in the last 6-7 months with the closest follower being the BOC(Bank of Canada) which hiked the rates for the first time in a loooong time. All the other major central banks are still in a dovish mode.

So, it seems strange that the USD is under such pressure. But on the other hand, forex traders were just as quick to jump on the northbound USD train when Donald Trump won the US elections, so we shouldn´t be too surprised if the USD breaks its back now that we´re seeing the real Trump. So basically, that´s what has happened to the USD during this year and  we´re continuing to see weakness today as well.

USD/JPY has been trading in a wide 500-600 pip range in the last several months, but within this range, this pair has been very trendy. One month we have seen it climbing higher nonstop, the next everything reversed and no one could stop the decline.

That´s where we stand right now! We´re in a middle of some heavy selling from whoever is doing it and this pair just broke the cluster of moving averages that were keeping the price afloat in the last few days. 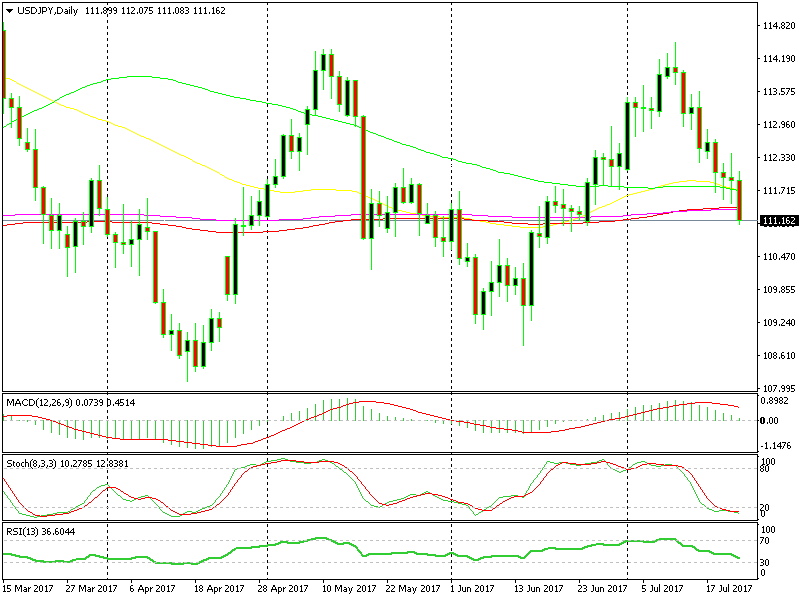 All of these moving averages have finally been breached today and we are eyeing the 1.08 level. That area, starting from 1.908 to 1.09, has been providing solid support twice this year, so this is going to be the third time.

Although, the sellers still have to take out the 1.11 and 1.10 levels before charging for 1.08. I was feeling tempted to go long yesterday or today, since the moving averages were providing support and the last 2 daily candlesticks closed as dojis, which point to a reversal. 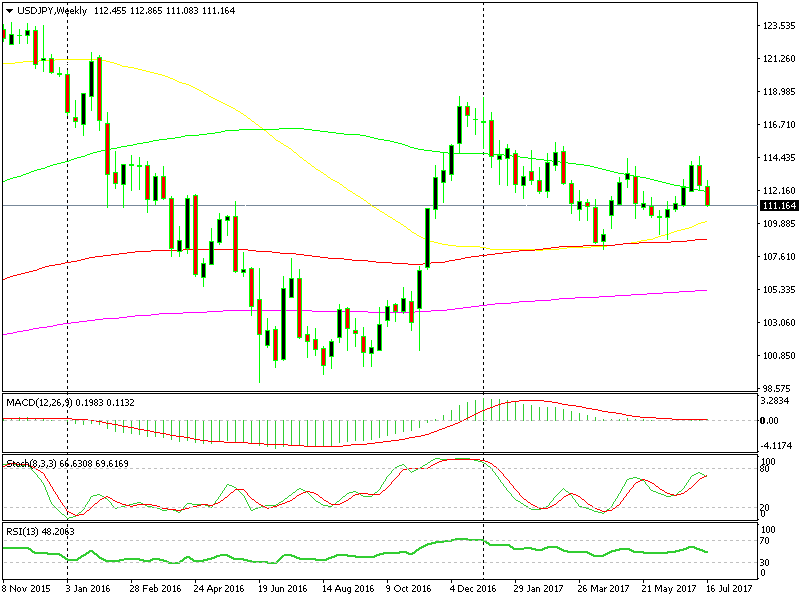 But the selling was too strong and the politics are all around us, Besides, risk/reward ratio around here was not that great. So, I´m glad to wait for 1.08xx before going long. You could as well open a sell forex trade targeting 1.0850s, with a stop above the moving averages, but I prefer to buy lower.

USD/JPY Trade Idea – Buy USD/JPY when it gets close to 1.089 with a stop below it an initial TP target around 1.11. The second target must be near the highs, around 1.14.

EUR/USD Uptrend Has Stalled – EUR/USD has been the prime beneficiary of the uncertainty surrounding the USD. That´s because besides US politics, the Euro factor is also affecting this pair, with the Euro factor being the better economic conditions in the Eurozone and the ECB turning hawkish sometime soon, although that´s still to come. But the market likes to anticipate things and it´s been anticipating the ECB tightening the monetary policy since January.

Nothing is sure, yet, EUR/USD has climbed about 13 cents since early January. But today, the climb has stalled while USD is continuing to slide against the Yen. 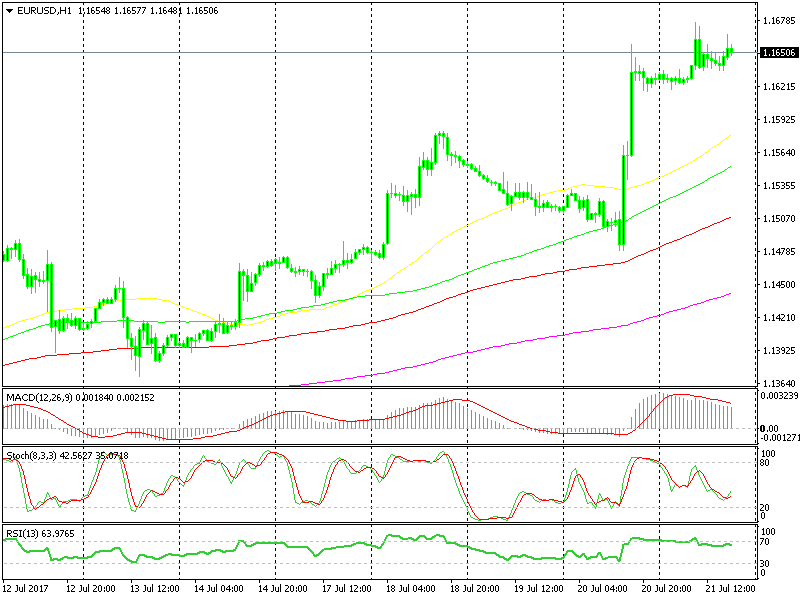 I`m not implying that we will see a reverse soon, which we might actually, but if Euro stalls while the other major currencies keep gaining against the Buck like today, then at least we can consider it as a warning signal for buyers.

EUR/USD Trade Idea – Trading this forex pair right now is too risky because this pair has run too far high to go long at this moment, while selling means going against such a strong trend. So, unless there is a clear trade, I would advise staying out of it until the picture becomes clearer.