What Happened To The Aussie? - Forex News by FX Leaders

What Happened To The Aussie?

Yesterday we posted a market update about AUD/USD where we pointed out that the big level at 1.80 was a bit too much for now. 24 hours later and the picture looks much brighter for sellers such as ourselves.

The 0.80 area is a big level in itself so there was bound to be some heavy selling around there. We got as close to a dozen pips away from it yesterday morning. But, after failing to reach that level, the price dipped about 90 pips.

In the afternoon, buyers had another go, but the high declined by about 20 pips, which means that buyers lost their strength.

This morning, the Aussie lost another 100 pips so the 100 SMA (red) on the weekly chart seems to have stopped it for now. 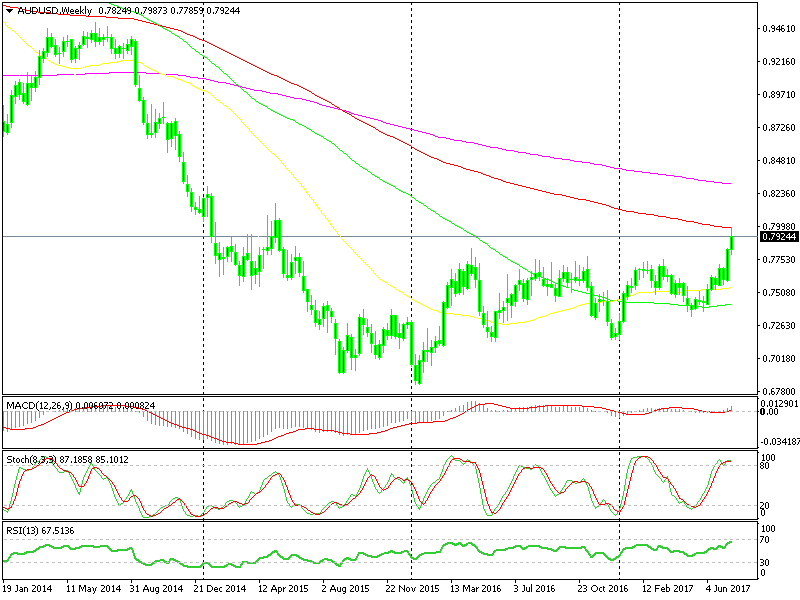 The price is retreating on the weekly chart

Looking at AUD/USD, the picture now looks sort of bearish or at least bearish enough for a decent retrace. Also, the other commodity currency pairs, such as NZD/USD and USD/CAD, are actually better off.

The NZD is keeping its uptrend and has gained against the Buck since last evening, while USD/CAD remains in a strong update, so what happened?

The RBA meeting was held early in the morning. While the statement was neutral, the comments from the RBA (Reserve Bank of Australia) Debelle sent the Australian Dollar tumbling.

The main comments were that the RBA doesn´t have to hike interest rates at the same pace as other major central banks, obviously pointing at the FED and that a strong AUD would minimize benefits of faster global growth.

The market is so concerned with rate hikes now, so every dovish comment about interest rates is likely to send any currency tumbling hard. That´s what´s happening to the Aussie and USD weakness is not helping either.

So, both technically and fundamentally this pair looks dovish to me. But, the big moves lower will come when the markets turn again to the USD for some comfort. Let´s wait with our long term forex signal here until that happens.