Today is Monday which isn´t the best day for those forex traders who are looking for volatility. Being the last week of July doesn’t help the matter either since the holiday season has already started for many big names in the industry.

Yes, they enjoy life but most of them deserve it, despite how the general public sees the industry.

So, it´s been like watching paint dry today, but we saw a few strange moves which suggest that the liquidity is getting thinner and that the forex market is not trading as an entity with connections between currencies.

Instead, most forex major pairs have had their own ideas today, from Cable and Aussie which have enjoyed some love, to the Kiwi which is unchanged and closing with USD/JPY completing a round trip.

Although, I expect volatility to pick up as the week progresses, because there are some very important economic data releases this week.

USD/JPY Remains On The Back Foot

Looks like no one can stop the USD/JPY sellers; this forex pair has been sliding lower since topping out about 2 weeks ago. It has lost about 4 cents during this time and today the slide lower extended further.

The pullbacks have been anaemic, with the biggest retrace being around 80 pips. That was the case with the pullback this morning when the Tokyo trading session started; this forex pair climbed 50 pips after the initial 40 pip tumble, only to turn back down again and end up 60 pips lower.

It has reversed back up now, but the trend is down and it´s pretty strong, so I see this latest climb as an opportunity to sell. 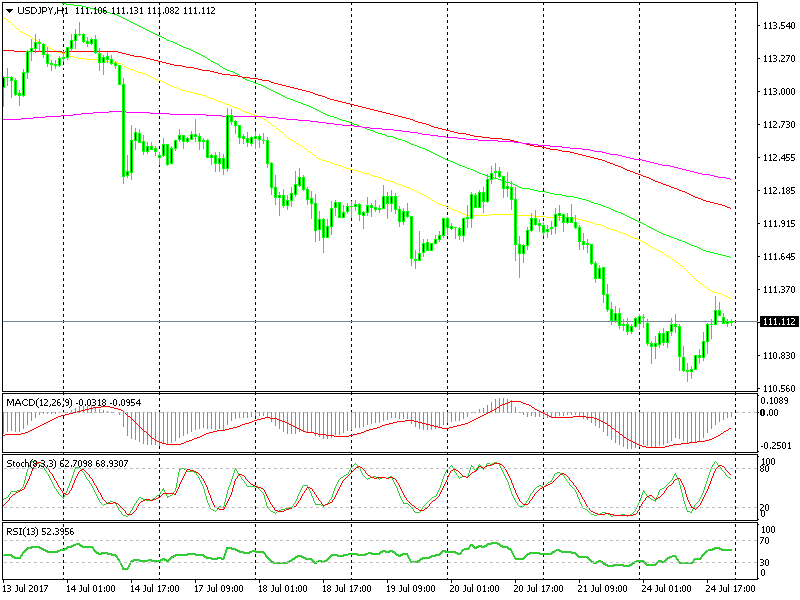 We missed the first opportunity to open a sell forex signal when USD/JPY made the first retrace higher this morning, so we´re planning to open a signal now. The 20 SMA (grey) is providing resistance just like this morning so we might pull the trigger any minute.

Update: Due to some technical problems we posted this article a few hours after being written. In the meantime, USD/JPY has broken above the 20 SMA and touched the 50 SMA (yellow). After failing to break the 50 SMA, we decided to open our forex signal, so we´re short on this pair now.

The Com Dolls (AUD, CAD & NZD) are positively correlated and usually trade in the same direction. But today they are all over the place.

The Aussie has been feeling weak during the end of last week, but this morning it jumped around 50 pips and I didn´t find anything that could justify this move.

That was a few hours ago though, now this forex pair has given back all of the gains. NZD/USD has traded sideways most of the day, but on a slightly bearish channel.

We opened a sell forex signal in this pair. It was going well and nearly reached take profit, but it reversed back higher. Although, the 20 SMA (grey) is providing resistance, so it looks like the price is turning back down now that´s near the top of the range. However, it remains to be seen how it will progress because stochastic has still some more room to run higher until it becomes overbought. 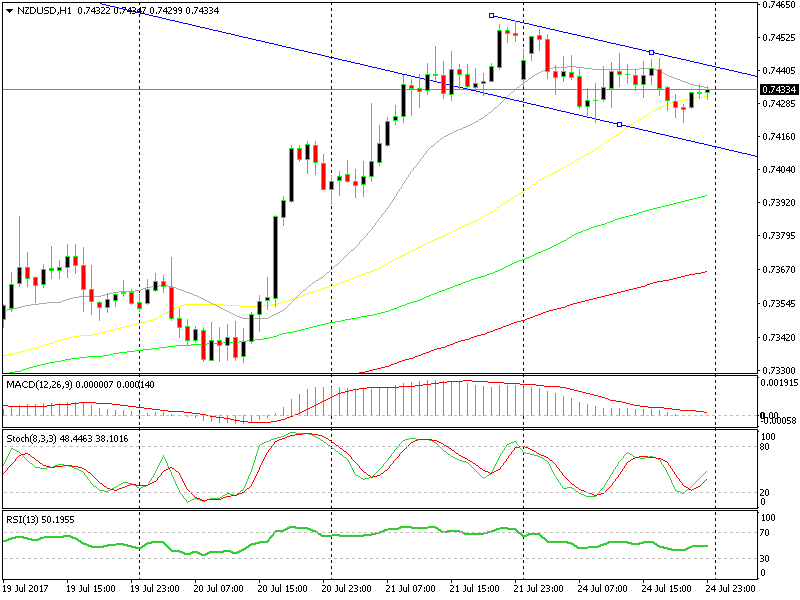 The 50 SMA is providing resistance at the moment

The Canadian Dollar on the other hand, has continued the climb, with USD/CAD following a strict downtrend. Although, this decline has stretched too far and the weekly chart has some interesting picture to offer, but we will take a better look at this pair first thing tomorrow morning.

The Retreat in USD/CAD Seems to Be Over, Despite Better Canadian GDP
11 hours ago